So remember how the Thunderbolt is pretty thick? It’s because the PCB runs the span of the entire phone and adds thickness. You can see just how much of the board is covered with stuff if you look at the FCC disassembly photo. For comparison, most other smartphones lately use a PCB that runs perhaps half the device height, then packs the battery in beside it. 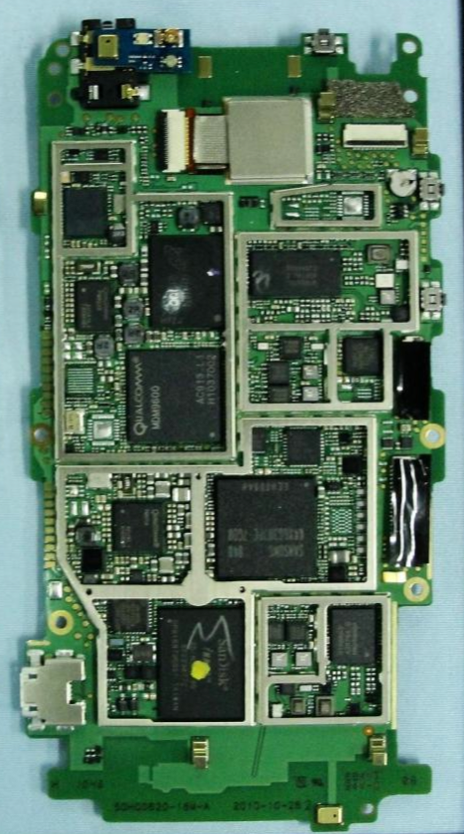 Whether or not simultaneous voice and data is a deal-making feature is ultimately something philosophical. For me at least, I’ve found that having data sessions pause while I send or receive SMS messages is reason enough for preferring the Thunderbolt over any other CDMA2000 based smartphone to date. The other use scenario that’s compelling is if users want to use an LTE enabled smartphone for tethering.

Thanks to its unique relationship with Qualcomm, HTC will likely have the only simultaneous EVDO/LTE and 1x voice handset for some time. The LG Revolution for example includes MSM8655 and LG’s L2000 LTE-only chipset, the Samsung 4G LTE smartphone (the Droid Charge) uses Hummingbird and probably just an MDM9600 for voice and data, and the Droid Bionic (whatever its status) likely will have a similar single baseband architecture. Recent literature from Verizon suggests that the Droid Charge will be simultaneous voice and data, but only in LTE markets - I strongly suspect this will be how the majority of other first gen LTE phones behave. In addition, voice on the Thunderbolt is not affected at all when transacting data because it’s the same old 1x voice that Verizon always has used. It isn’t VoIP, it’s the same *real* voice connection it always was. I found that voice and data work perfectly at the same time on the Thunderbolt.

So how does LTE throughput stack up on the Thunderbolt, especially compared to EVDO? A number of other testers noted that speedtest.net shows erroneous upstream speeds thanks to the Thunderbolt’s huge transmit buffer when on 4G LTE. 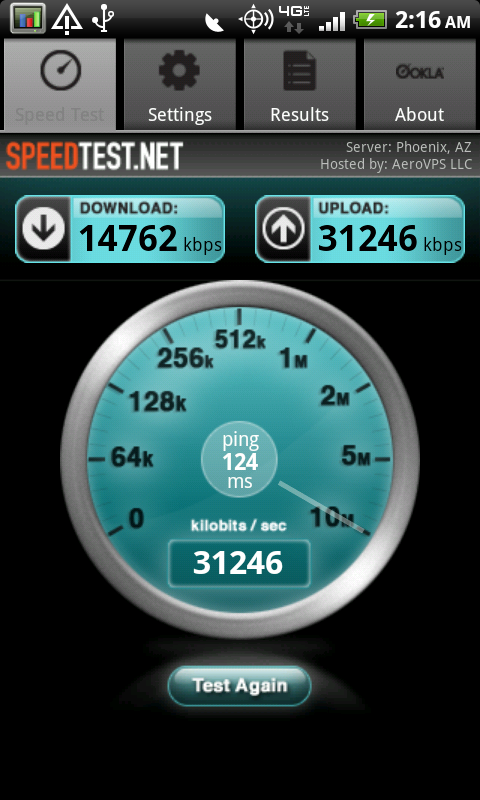 What happens is that the speedtest.net app’s upstream test size is almost aligned in size with the transmit buffer, so not enough samples are taken to show the realistic speed. Run the test, watch it, and you get a very token bucket looking throughput pattern. What ends up being measured is nonsense for upstream, but nearly valid for downstream. The Android Speedtest.net app has since been updated and shows the proper upstream throughput profile and has a UI that matches the iOS version, but my testing was originally done when the old version was the only option.

All of that isn’t a huge deal however, since we can browse the real web version inside the flash enabled browser. Yay for mobile flash! 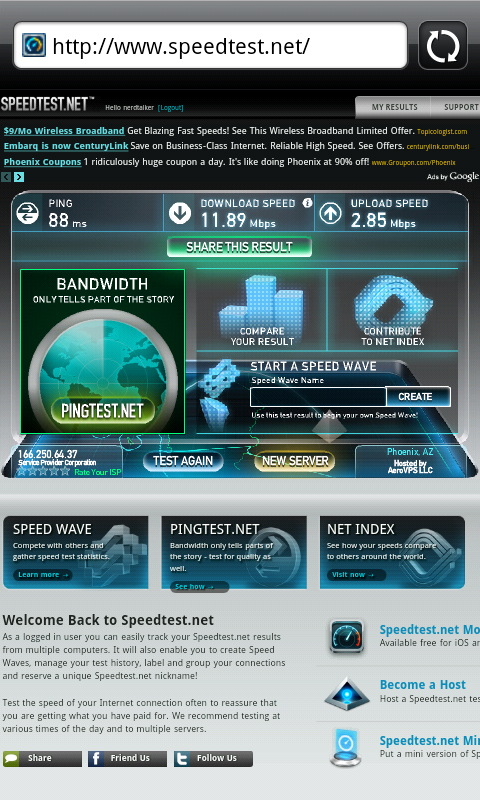 I’ve run a ton of tests on the Thunderbolt in just about every coverage scenario imaginable up in Phoenix, AZ. At interstate speeds on the I-10, 202 loop, downtown central Phoenix, inside every mall (yes, every major mall), indoors, outdoors, good and bad coverage, you name it. There’s even more testing in the LTE piece, but here I’m presenting results just from the Thunderbolt acquired from running the flash version of speedtest.net. All together this is 163 data points collected for the Thunderbolt alone. 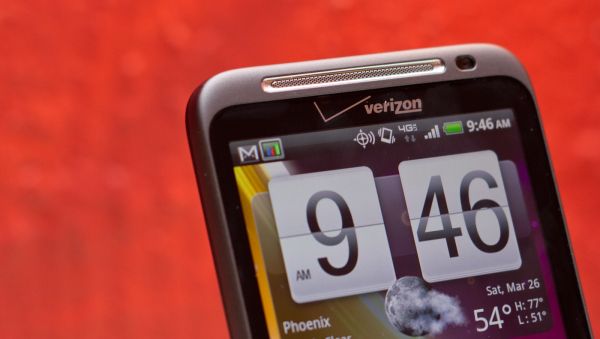 First up is downstream. I've collected results for both 4G LTE and 3G EVDO: 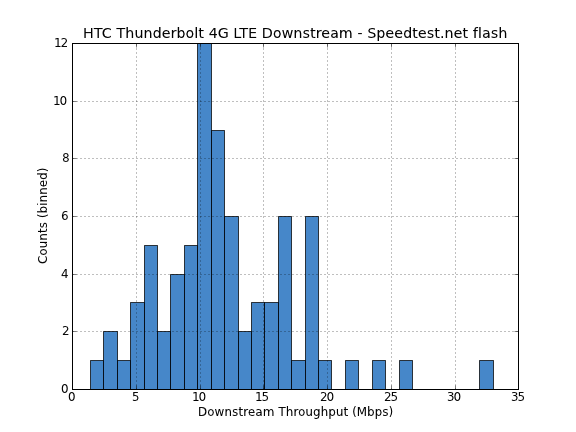 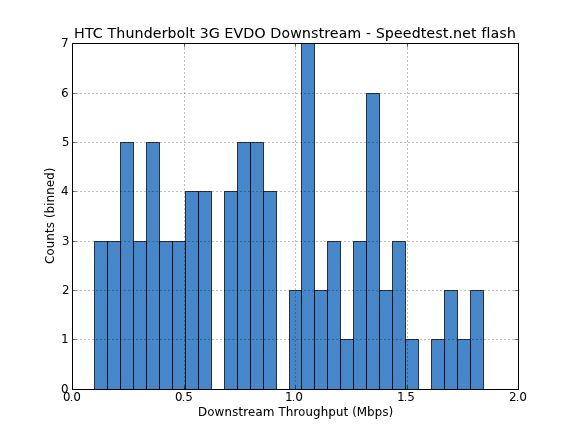 Next up is upstream, again on both 4G LTE and 3G EVDO: 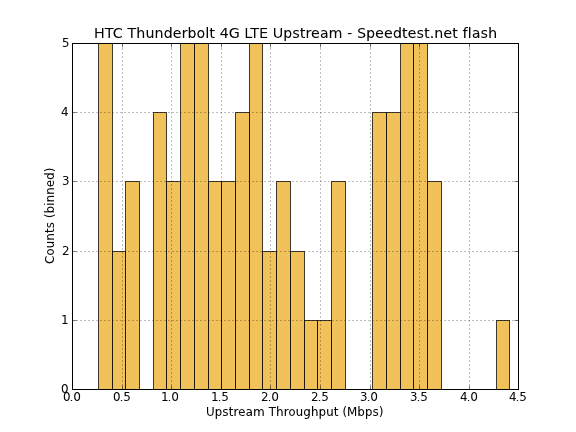 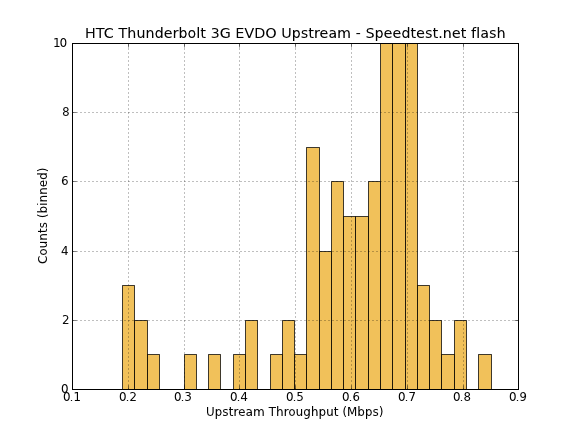 Finally we have latency, again on 4G LTE and 3G EVDO: 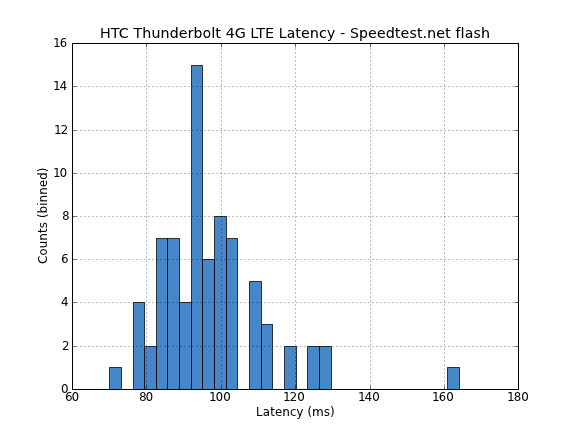 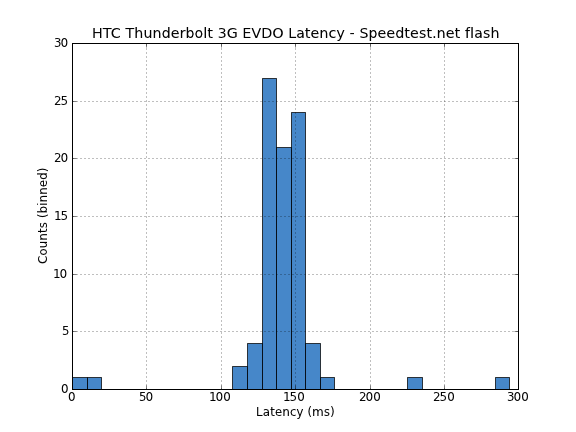 What’s interesting is that upstream speeds on the Thunderbolt are a bit more spread out than for data cards, likely due to the 1 Tx stream (as opposed to two for others). Downstream speeds are impressive, however, clustered primarily around 10 Mbps. Latency is also clustered around 90 ms.

What really speaks to me, however, is that with 4G LTE, worst case speeds are as slow as EVDO is fast. Put another way, LTE’s slowest is about EVDO’s fastest.

Average speeds are about an order of magnitude faster on LTE than EVDO. Latency is down from around 150 ms on EVDO to around 90 ms on LTE.

Coupled with the WiFi hotspot feature, it’s also finally feasible to play games over cellular when on 4G LTE without having insane amounts of latency. While you can arguably survive with some consoles on EVDO or HSPA right now thanks to copious amounts of latency interpolation, nothing really beats actually having sub 100 ms latency. I found that I was able to play CS:S to a nearby server hosted in the same locale and get 70-80 ms of latency tethered over WiFi on the Thunderbolt. By comparison, using a Pantech UML290 (4G LTE datacard) netted me between 50-60 ms. It’s clear that NAT and WiFi overhead add around 20 ms to the connection, but overall the result is a totally usable experience. I've put together a video showing this all in action.

4G LTE implementational details are also important, and I found that the Thunderbolt is close to perfect. The initial handover when you enter an LTE enabled market is a little long. I drove from outside the greater Phoenix metro area into coverage multiple times and timed about 3-5 minutes before hard handover happened. That’s of course if you don’t provoke the handover to happen manually by toggling airplane mode or through *#*#4636#*#* (4636 stands for info) as I’ll show in a minute. When you’re already inside LTE coverage area and simply drop down to 3G, handing back and forth is much faster, it’s nearly instantaneous.

I definitely noticed that Verizon’s 700 MHz spectrum (which is allocated to LTE) does have better propagation characteristics in urban environments that are traditionally very hard to get done right. Large malls and shopping centers specifically are notoriously bad, and the Thunderbolt had no issue clinging to 4G signal in all but the worst areas. In those edge cases, it’ll fall down to EVDO or 1x. I did find that sometimes the LTE to EVDO handover happens a bit more than I’d like it to, if you know you’re in an LTE coverage area, however, you can force LTE only through info.

One of the major complaints and curiosities about the Thunderbolt is that there’s no toggle for 4G LTE in the higher level user menus. If you’re in an LTE market, it makes sense to use it whenever possible, however there are measurable power savings from using EVDO only. In either scenario however the two cellular modems are both powered on. With the Thunderbolt I’m more concerned with keeping LTE always selected and never handing over to anything less. Allow me to introduce you to Phone Information.

There’s an app floating around that gets you here, or you could make a shortcut using anycut, but it’s always been accessible using a dialer code. I simply dial *#*#4636#*#* whenever I want to get here. 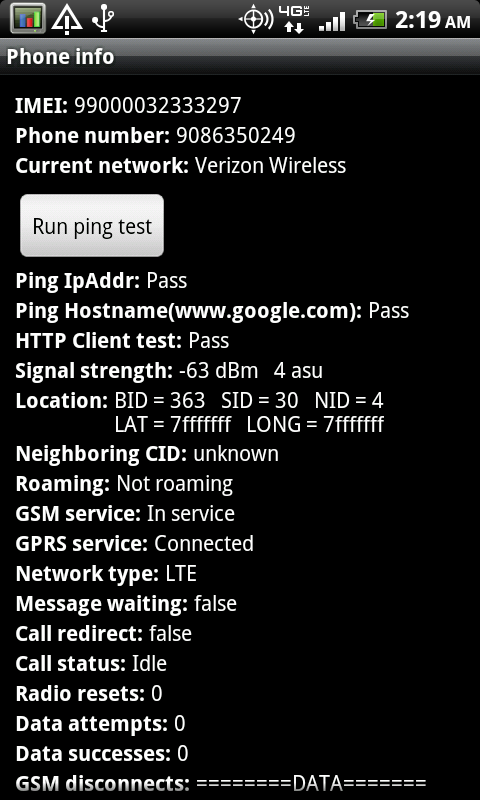 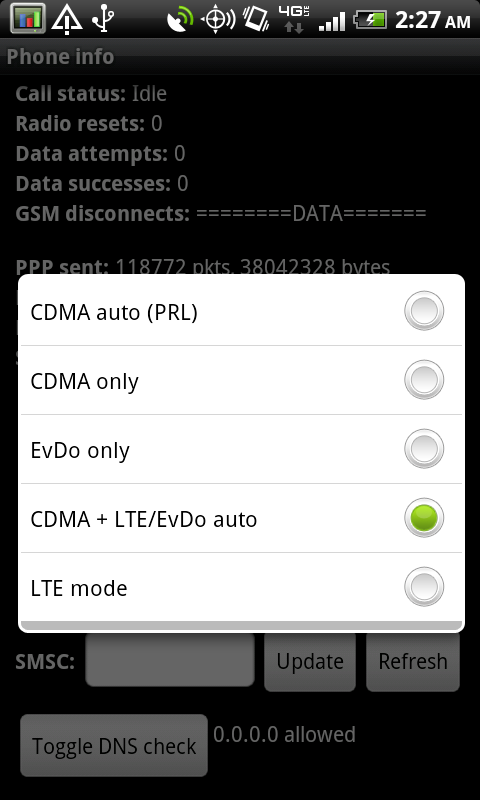 Virtually every Android phone has this menu and the same options, unless the carrier has gone to lengths to disable it. The Samsung Fascinate, for example buried this under a ton of obfuscation, and the HTC Inspire 4G disallows selection of anything less than constant HSPA, but I digress.

Tap Phone Information, and now you get access to a lot of status information including signal strength in dBm and asu, some cell location info, network attach status, and the connection type. Here you can see CDMA - eHRPD in EVDO (enhanced High Rate Packet Data), CDMA - 1x or LTE when in appropriate coverage. Tap “set preferred network type” and you can now select between a number of options. LTE mode is unsurprisingly for an LTE-only mode, standard is CDMA + LTE/EVDO auto, EVDO and CDMA only are both self expanatory. Keep in mind that in every mode the MSM8655 modem is still on and maintaining a 1x voice or data connection. I find this menu again more useful for forcing LTE only and avoiding any annoying hard handovers if you’re absolutely certain you are in an LTE coverage area. You don’t need to use it though, everything works fine out of box.