A Tale of Two Cellular Radios

I suppose now is as good a time as any to delve into the dual transceiver situation on the Thunderbolt. The two transceivers I speak of are the MSM8655’s built in cellular baseband (like all Qualcomm SoCs, you get a modem for free), and the MDM9600 which sits at the heart of every single other Verizon LTE product except the LG VL600 data card, which uses LG’s own L2000 chipset. If you want the short story, the Thunderbolt fully supports simultaneous CDMA2000-1x voice and 3G EVDO or 4G LTE data. The way this is done should already be somewhat obvious - the MSM8655 gives the Thunderbolt a continual free CDMA 1x connection for voice, SMS, and slow data, and the MDM9600 does all the 3G EVDO and 4G LTE data heavy lifting. What this boils down to is real SVDO (Simultaneous Voice Data Optimized) and SVLTE (Simultaneous Voice and Long Term Evolution data). 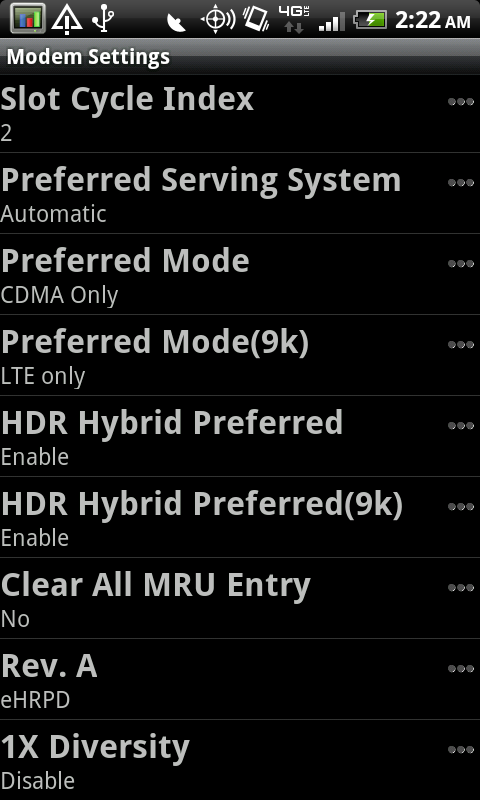 You can see proof of this in the Thunderbolt’s EPST menus, where there’s a second additional field marked “9k” which clearly is for the MDM9600 (9600, 9k, ahh right). 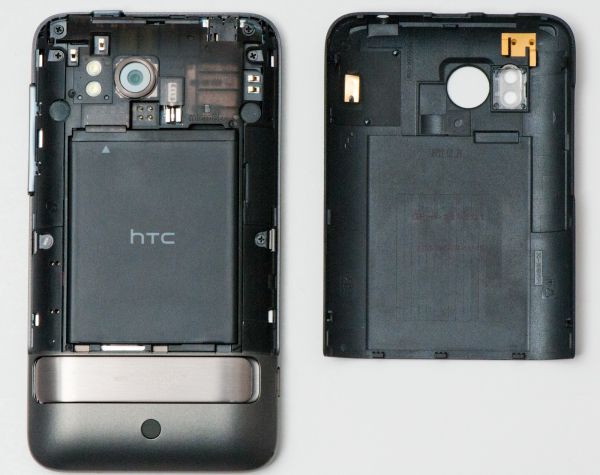 The Thunderbolt comes by default with a 1400 mAh, 3.7 VDC (5.18 Whr) battery (the official extended battery is 2750 mAh, 3.7 VDC, 10.18 Whr, as an aside). If you remove the battery, you can access the Thunderbolt’s USIM which slides out long ways first in a metal carrier. This is the first time I’ve seen a SIM door insert this way, but it works.

While we're talking about SIMs, Verizon's is technically both a CSIM and USIM. CDMA credentials are on the SIM (CSIM) as well as the credentials for LTE (USIM). The way the term SIM is abused lately for anything resembling one will likely continue, but if you're going to be pedantic, it's really both. Anyhow, as a result, you can finally swap devices on Verizon without having to call support, give them an ESN, and wait for routing tables to switch everything over. I haven't personally tried it since I don't have two Thunderbolts, but Verizon does advertise this is as a notable feature that finally brings full device portability. This is a huge feature if you intend to swap between devices a lot. 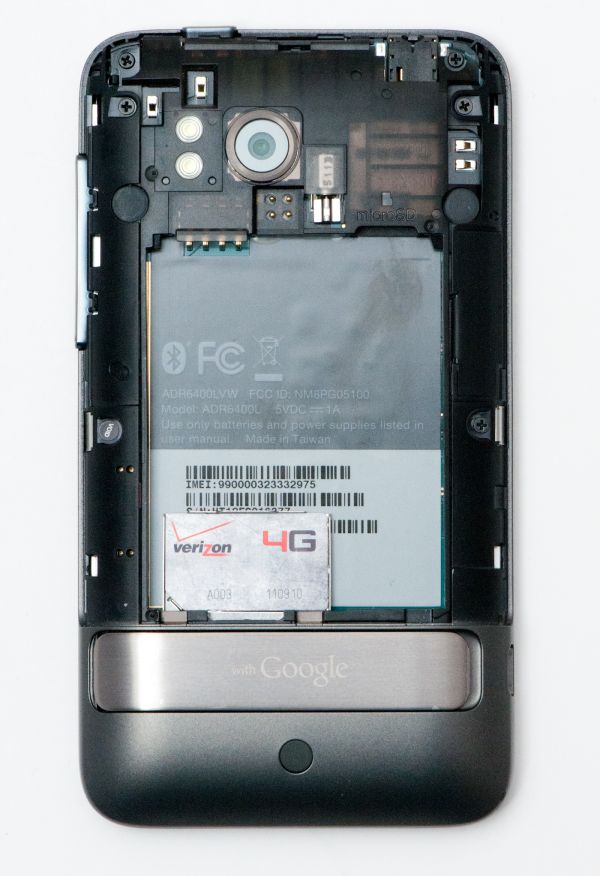 The reason why it’s held on so securely makes sense the second you get it off - there are two antennas back here built into the door. The reason for such a stiff and beefy door is so that no fewer than four independent contacts need to be held in good electrical contact. Count them - two contacts for the top right connector, another for top left, and another for wireless induction charging if you go with the extended battery combo. 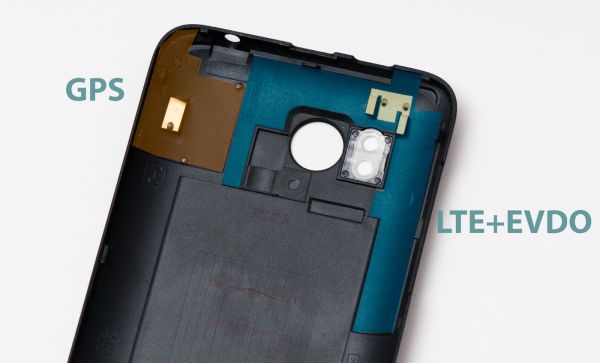 Though we never reviewed it formally, the myTouch 4G was the first time I saw HTC start to go down the modular antenna route, with a similarly detachable (internal) antenna board. The Thunderbolt does the same thing here, yet builds it into the battery door. Likewise, the HTC Desire HD does the same thing, as does the upcoming Sensation. It isn’t just Apple that gets creative with antennas now and then, HTC deserves some credit too.

The antenna on the left is for GPS and even bears a marking to that effect on the flex board. The one on the right is for the MDM9600 and thus works for data on LTE and EVDO. There are two holes which punch clean through to the opposite side, clearly to ensure good contact with whatever antenna is built into this battery door. 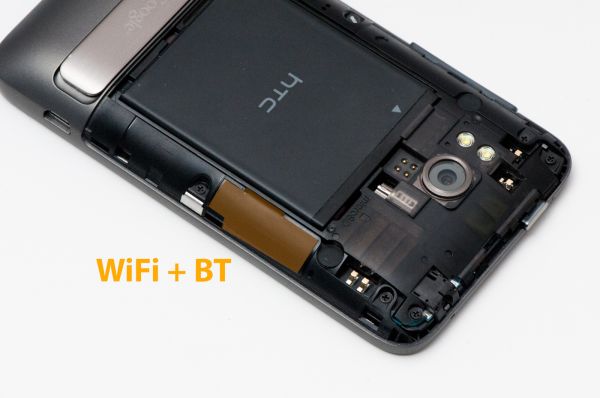 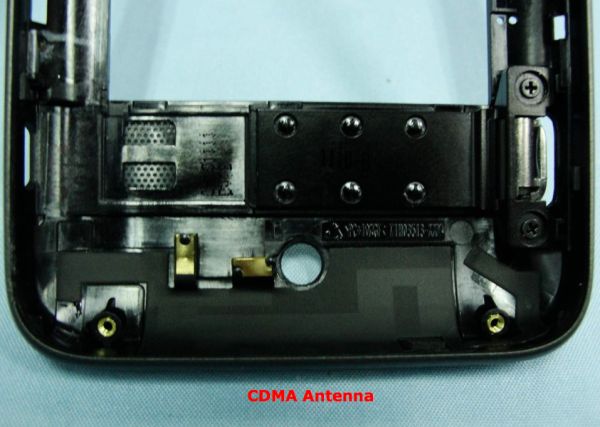 That’s a bit of a simplification too. If you’ve read anything about LTE or our other piece on it, you should know by now that a large part of the specification is mandatory multiple antenna support. At least on Verizon’s LTE network all devices need to be category 2 or 3, which means they must incorporate MIMO. The HTC Thunderbolt’s UL MIMO configuration is 1x2, meaning it has 1 transmit antenna and 2 receive antennas. The RF chains for both the MSM8655 and MDM9600 basebands are independent, however the two share an Rx antenna at the bottom in the traditional spot. This antenna serves as 1x voice Tx/Rx for the MSM8655, and EVDO/LTE Rx for the MDM9600.

The one at the top is EVDO/LTE Tx/Rx for the MDM9600. You can verify this yourself  if you pry the back cover off the phone while in an LTE or EVDO data session - it goes away and you promptly fall back to slow 1x data. Pretty cool though.

I spent a lot of time on the phone with Qualcomm talking about the radios in the Thunderbolt and LTE in general. I ended up learning a ton more about the number of design challenges involved with making SVDO and SVLTE work for the first time and gained an appreciation for even more complexities than I expected.

First off, since this is the first phone (I’m aware of) with dual cellular transceivers that can be active at the same time, Qualcomm and HTC had to work with the FCC to establish proper testing to making sure the Thunderbolt meets FCC SAR (Specific Absorption Rate) requirements. Remember that although the HTC EVO 4G could have conceivably supported simultaneous 4G WiMAX and 1x voice, the feature was disabled and to my knowledge hasn’t ever been enabled. It’s for this reason - until the Thunderbolt no proper procedure for characterizing dual transceiver phones existed. (Update: Apparently the EVO does support simultaneous WiMAX data and 1x voice, thanks everyone!)

Architecting a dual-transciever cellular system that works properly with FCC SAR requirements necessitated some communication and logic between the MDM9600 and MSM8655 basebands. This is noted in addition in the FCC report for the Thunderbolt:

It’s an edge case, but imagine a situation where you’re at cell’s edge transacting both LTE data and 1x voice. In that circumstance, SAR could theoretically exceed legal limits. To keep this from happening, that communication link between the MDM9600 and MSM8655 lets the Thunderbolt know the power and link budgets for both and allocate accordingly by reducing throughput on the data link. There are a whopping 17 Tx configurations that the Thunderbolt needs to support all while maintaining legal power budgets. 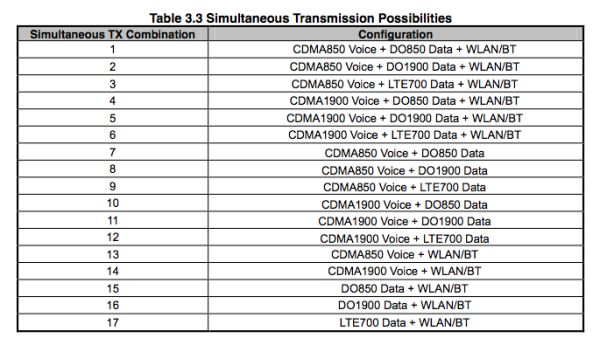 I tested endlessly trying to detect any 4G LTE speed degradation at the cell edge while on a voice call but never could notice anything appreciable.

This wouldn't be a complete review without a measurement to show whether the Thunderbolt is prone to deathgrip. Luckily thanks to the antenna diversity we've outlined, the Thunderbolt really isn't. I've done the due diligence of measuring the handset in our usual positions in both 3G and 4G environments.

The Thunderbolt has noticeably less attenuation when held in a 4G LTE scenario, no doubt thanks in part to the fact that it's fully leveraging MIMO and also on a 700 MHz carrier. I was surprised to see that make any measurable difference. I also saw a considerable amount of variance before the number settled down, which to me definitely indicates some DSP deciding on what link it can reliably hang onto in LTE coverage. In 3G EVDO the picture isn't as complicated, again attenuation is low until you put flesh over both antennas like what happens when it's on an open palm.