For the GTX 590 launch, NVIDIA once again sampled partner cards rather than sampling reference cards directly to the press. Even with this, all of the cards launching today are more-or-less reference with a few cosmetic changes, so everything we’re describing here applies to all other GTX 590 cards unless otherwise noted.

Jumping right into things, the GTX 590 ends up having far more in common with the recently launched 6990 than it does the original GTX 295. NVIDIA has gone with a single PCB design with GPUs at either end of the card. In the center is an 80mm fan, which blows hot air out either end of the card. As a result the GTX 590 is extremely close to the 6990 in design with only a few critical differences, so it’s those differences we’re going to focus on.

Starting at the PCB level, we’ve already touched on how NVIDIA is placing GPUs at either end of the card. Power is provided through set of 10-phase VRMs; we don’t recognize the VRMs being used here. Meanwhile PCIe bridging is being provided by NVIDIA’s venerable NF200 PCIe bridge, which offers PCIe 2.0 x16 communication between each GPU, with the GPUs sharing the x16 link to the CPU. 24 1Gb GDDR5 chips cover the card, half on each side of the PCB. Our card was outfit with Samsung 5GHz modules, meaning the 384-bit memory bus is going to error out long before the GDDR5 chips themselves reach their limits given the card’s low default clocks.

Moving up a level is the GTX 590’s cooling apparatus. NVIDIA is using a design very similar to the GTX 580, re-oriented for a dual-GPU card. A metal baseplate provides structural rigidity to the card along with serving as a basic heatsink for the VRMs and GDDR5 memory modules. The GPUs themselves are cooled by the same style vapor chamber based aluminum heatsinks we saw on the GTX 580. Unlike AMD, NVIDIA isn’t using an exotic phase change thermal compound here, but they are using a high end compound, specifically Shin-Etsu MicroSi X23-7762. 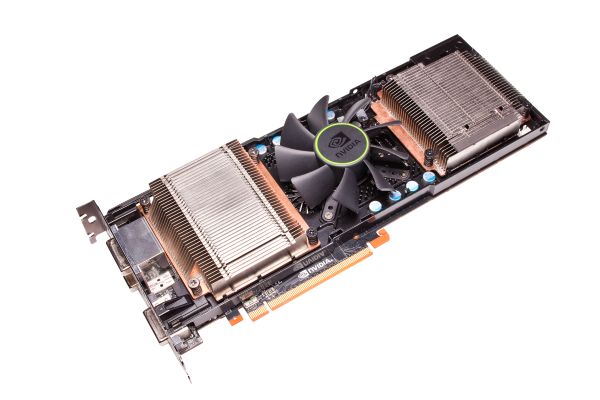 When it comes to cooling the biggest immediate difference from the similarly designed 6990 is going to be the choice of fan. AMD went for a blower, similar to what we seen time and time again on the GTX 400 & 500 series, along with the Radeon HD 5000 & 6000 series. NVIDIA however went with a traditional 80mm fan, which isn’t something we’ve seen on high end cards as of late. In practice the functionality is identical—each blows air out either end of the card. The biggest difference is going to be airflow and noise; by launching 2nd NVIDIA has seen AMD’s hand and knows that the 6990 ended up being rather loud. Consequently one of the promoted features is that NVIDIA is claiming the GTX 590 will be among the quietest dual-GPU cards in recent years—as we’ll see this is definitely a claim that has merit when compared to the 6990.

Finally topping the card is a removable shroud that encloses the card to only allow air immediately out of the front and rear ends of the card. Compared to the 6990 NVIDIA has kept their common recessed design, with the shroud & fan being slightly recessed compared to the thickness of the card elsewhere. Compared once more to the 6990, one quirk is that while AMD left a whole slot’s worth of ventilation available on either side of the card, on the external exhaust side of the card NVIDIA only has what amounts to half a slot of ventilation. The other half of the slot is occupied by a DVI connector, meaning the GTX 590 has a smaller external ventilation opening than even the GTX 580, even though TDP is up. As you might expect this means that more hot air is clearly being exhausted inside the case, making effective case cooling even more critical than it was with the 6990. 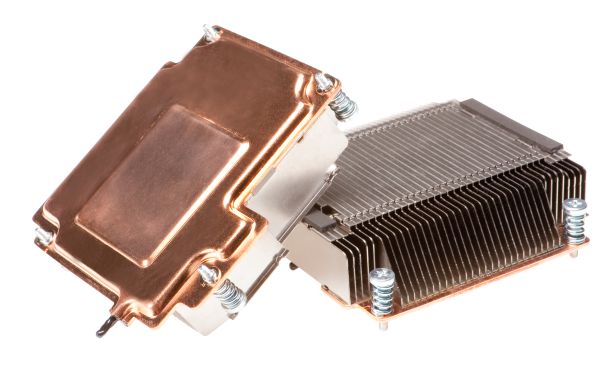 Case in point, we once again bring you our hard drive temperature chart, showcasing the impact of exhausting hot air directly toward our test bed’s hard drive cage.

At 37C the 6990 was already warm, and the 6990OC pushed this even higher to 40C. The GTX 590 does even worse in this regard, increasing our drive temperature to 42C, some 15C warmer than a 6970CF setup where all hot air is being channeled outside of the case. So if you’re going to be using a GTX 590, it’s absolutely imperative that you don’t place any kind of drive behind it, it needs a clear shot towards the front intake of the case.

On that note the GTX 590 does have one other design benefit for cooling purposes: length. While the 6990 was 12” long, the GTX 590 is only 11” long. This isn’t necessarily going to make the card any easier to fit given the cooling requirements, however it’s going to make it much easier to fit an exhaust case fan in front of the GTX 590. With the 6990 we mused about turning the closest air intake in to an exhaust, but with the GTX 590 the extra space afforded by the shorter card actually makes that possible. 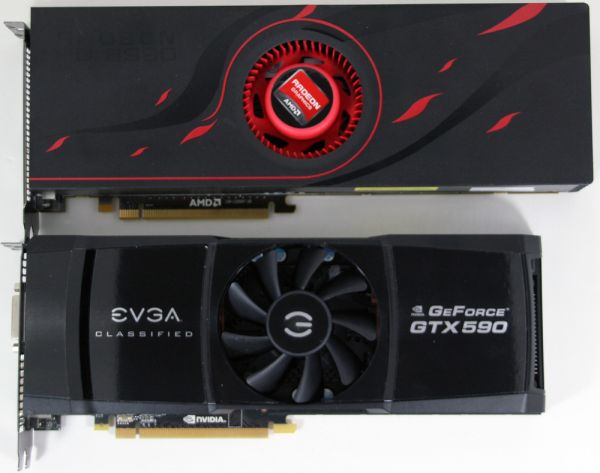 Moving on, on the back side of the GTX 590 we find two partial backplates. These serve as protection of and a heatsink for the 12 GDDR5 memory modules on the back of the card. This is also one of the only hardware differences between the reference GTX 590 and the EVGA GTX 590 Classified—EVGA uses a single backplate with strategically placed holes instead. It should change cooling performance, but it does make the card a bit easier to grip by further preventing contact with any components on the back of
the card.

Ultimately with a 365W TDP NVIDIA’s advice about SLI mirrors AMD’s advice on the 6990 in CrossFire: these cards need a lot of breathing room, a lot of airflow, and a lot of power. One or more empty slots are required between cards in order to give them suitable room to pull in air, meaning only a small number of boards are going to be compatible due to PEG slot spacing. NVIDIA will be posting a Quad SLI certification list on their site; having already seen it the smallest PSU on the list is an 1100W unit and it goes up from there. With good scaling Quad SLI should provide quite a bit of performance, but it will take some specific hardware to get there.

Up next is power and display connectivity. As was the case with the 6990, the GTX 590 is setup to officially draw up to 375W, through the use of two 8pin 150W PCIe power sockets along with a further 75W from the PCIe slot. The card should be safely capable of pulling more power than this, but unlike AMD NVIDIA isn’t making any kind of explicit or implicit promise about what the card can handle when overclocking.

As GF110 can only drive two displays, NVIDIA is tying together the display outputs of both GPUs to drive the card’s four display outputs. Unlike AMD who went heavy on DisplayPort and light in DVI, NVIDIA is going heavy on DVI and light on DisplayPort. Three DL-DVI ports adorn the card along with a single mini-DP port, making this the first time we’ve seen DP on an NVIDIA reference design. The port choice here seems to be heavily influenced by NVIDIA’s 3D Vision Surround—most compatible monitors are DL-DVI only, and DP to DL-DVI adapters are quite a bit more expensive than SL-DVI adapters, meaning going the adapter route like AMD would be impractical. As a consequence of this NVIDIA has to place one DVI port on the 2nd slot, taking up half of the card’s external ventilation slot.