If you recall our coverage on the 5970, we found a few areas where AMD was lacking. The cooling on the 5970 was sufficient to run the GPUs even at 5870 clocks and voltages, however the cooling on the VRMs was lacking, leading to real world programs trigging the VRM thermal protection mechanism; and while this was within safety guidelines, it’s not a comfortable place to be for long term operation. This ultimately led to us writing off the 5970OC as a 100% reliable product, sticking to recommending the 5970 solely at stock speeds.

The design of the 6990 in turn reads very much like a response to our findings in true engineering fashion. Furthermore for the 6990 AMD not only had to take a look at the 5970’s weaknesses, but also how to handle an even greater power load. The result is that the 6990 is distinctly different from the 5970 before it. 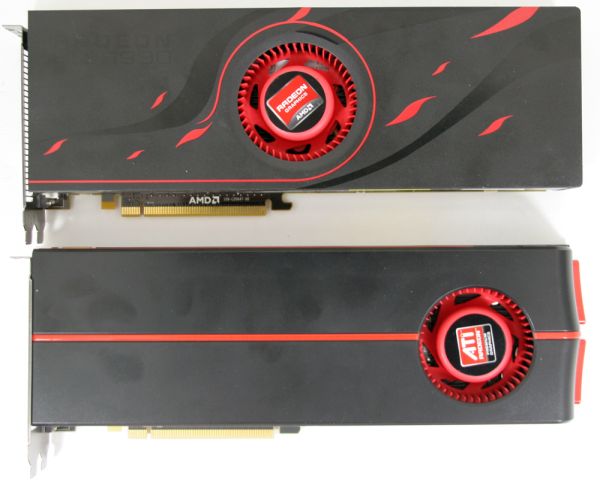 Meanwhile it’s the fan however that is going to catch the most attention and this is where we’re going to dovetail in to cooling. The 5970’s traditional blower had its strengths and weaknesses, the strengths being that blowers are relatively forgiving about a case’s ability to exhaust hot air, and the weaknesses being that the GPU (and VRMs) closest to the fan received better cooling than the farther GPU. The VRMs proved to be particularly problematic, as they could overheat well before the GPUs did and AMD does not spin up their fans based on VRM temperatures.

Correcting for this and at the same time allowing for even greater heat dissipation, the rear blower design is out. Its replacement is a design that we’ve seen in 3rd party cards before such as the Asus ARES 5870X2, but not in a reference design: a center-mounted fan/blower with a GPU to each side. The difference is critical and indeed cannot be understated: a rear blower channels most hot air outside of the case, while a center-mounted blower effectively splits the card in two, with one GPU + supporting chips being exhausted outside of the case, and the 2nd GPU + supporting chips being exhausted inside the case. The design is still enclosed, so everything goes out either the front or back of the card while fresh air is pulled in the center.

With the replacement of the blower, so has gone the heatsink. The 5970’s single large vapor chamber + heatsink design has been replaced in favor of a segmented heatsink, further driving home the concept that the 6990 is closer to 2 video cards sharing 1PCB than it is 2 GPUs on one card. Each heatsink in turn is connected to the GPU via its own vapor chamber, resulting in the GPUs being fully isolated from each other as far as cooling is concerned. 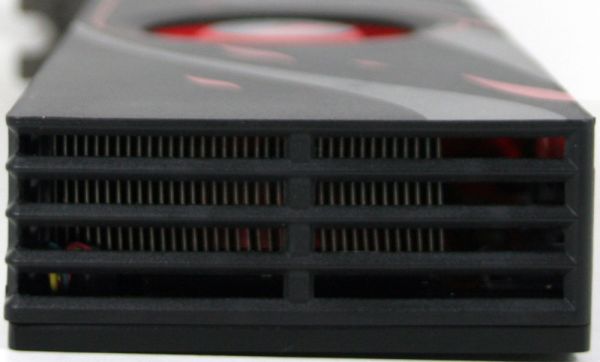 Even the thermal paste connecting the GPUs to the vapor chambers has been changed for the 6990 – AMD has replaced traditional paste with a phase change material. Phase change materials – pastes/pads of material that melt and solidify based on temperature are nothing new, however they’re still exotic; material similar to what AMD is using is not readily available as paste is. AMD even went so far as to suggest that reviewers not directly disassemble their 6990s as it would require a new application of phase change paste in order to achieve the same efficiency as the original material. The net result of all of this by AMD’s numbers is that the phase change material is 8% better than the regular paste they’ve been using.

Rounding out our focus on cooling is the VRMs, which have been relocated in order to correct for the 5970’s limited VRM cooling capabilities. The VRMs and controllers are now at the center of the board – now they’re cooled before the GPUs or RAM modules are. The profoundness of this is twofold: not only is it an improvement on the 5970, but with the 6990’s higher power consumption VRM cooling is even more important. As with the 6970, voltage regulation is supplied by Volterra MOSFETs and controllers.