Despite being powered by NVIDIA's Tegra 2 SoC, Motorola makes absolutely no mention of NVIDIA or the Tegra 2 anywhere on the box. In fact, upon powering on the phone the first thing you see is a Motorola Dual-Core Technology splash screen.

Currently in the smartphone space the majority of the power rests within the carrier (e.g. AT&T) and device manufacturer (e.g. Motorola). Although they contribute handsomely to the final product, the component vendors have limited control in this market. 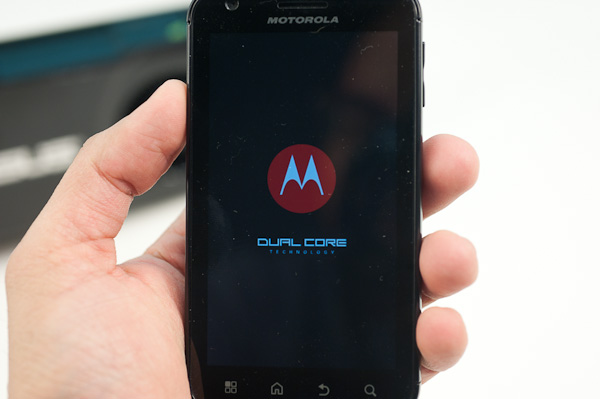 You'll note that this is in stark contrast to how things work in the PC industry. Here the OS and component vendors have all of the power and the PC manufacturers themselves are glorified assembly houses that fight to differentiate. This is an oversimplification, especially when you take companies like Apple and HP into consideration, but I use it to point out the contrast. 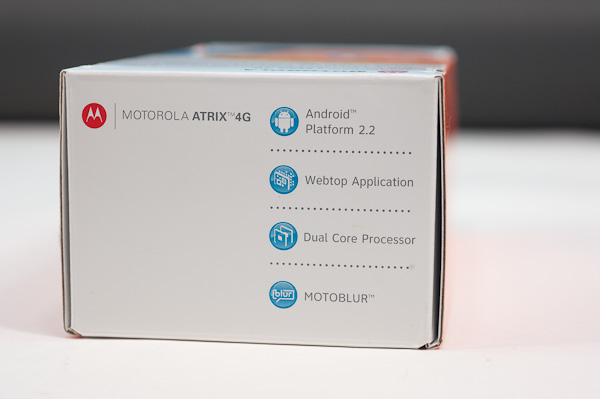 I've often wondered if the smartphone industry may eventually evolve to look more like the PC industry. It's not abundantly clear to me that the current concentration of power in the carrier and device vendor is healthy for the future of the smartphone. It's not clear that the opposite would be true either.

The only thing I can point to is the fact that this carrier/OEM power concentration helped get us to the mess that we had before the smartphone revolution took place. I'm not sure whether, if left unchecked, the same thing wouldn't happen again this time around. I don't really have an answer here, just some public musing. Feel free to join in :)

Motorola clearly wants to emulate the Apple model of isolating consumers from the underlying hardware and focusing on delivering a good software user experience. In pursuit of that goal Motorola ships its own Motoblur UI/widget/app software on the Atrix 4G. Motoblur is similar to HTC's Sense and Samsung's TouchWiz in that it modifies, replaces or enhances elements of the stock Android OS. The Atrix 4G ships with Android 2.2.1 and Motorola has committed to an upgrade to Gingerbread (2.3) before the end of the year.

As Brian mentioned in his review of the Droid X, Motorola ships Motoblur in a preconfigured state. There are 7 home screens in the default Motoblur setup. Six of them are already populated with widgets. I tend to agree with Brian in that I want my devices to come as clean as possible, but I understand what Motorla was trying to do here. The Atrix 4G is meant to be a turn-on-and-just-work device, not something you have to configure to make perfect. In its quest to be the Android answer to Apple, Motorola even puts the carrier string in the notification shade:

The notification shade gets pretty cluttered as a result. Also note the use of H+ to indicate that we're connected to a HSPA+ network.

Most of the custom widgets are pretty run of the mill (e.g. airplane mode toggle, messages, news, calendar).

Motorola also adds several of its own custom apps. The Social Networking app is Motorola's attempt at social network aggregation. It's a single apps that combines updates from your Facebook and Twitter feeds. Motoblur also populates your contact list with your Facebook friends and people you follow on twitter (assuming you supply it with your login for those accounts). Unlike Windows Phone 7's social integration, Motoblur lets you view contacts by group (e.g. only show me contacts from Facebook) and it allows you to only display contacts that have phone numbers associated with them. The Atrix 4G also ships with file and task manager apps pre-loaded.

There's a handy DLNA app that lets you play content on your Atrix streamed from any DLNA compliant sources. You can also push content from your Atrix to DLNA receivers. 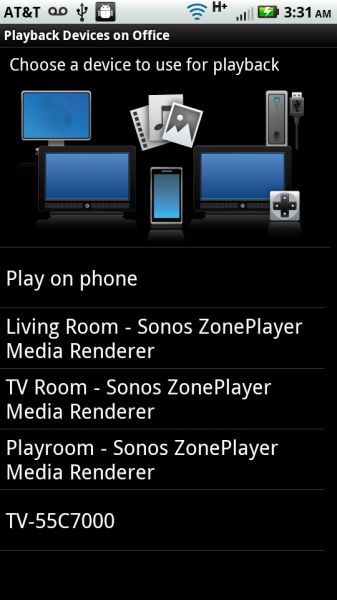 The biggest issue I had with the DLNA app is the limited filetype support that the Atrix 4G offers. Like the Optimus 2X, most of our media streaming suite just won't play back on the phone. I suspect by 2013 this will stop being a problem thanks to much more capable hardware and more motivation to enable support for a wider spectrum of video containers. 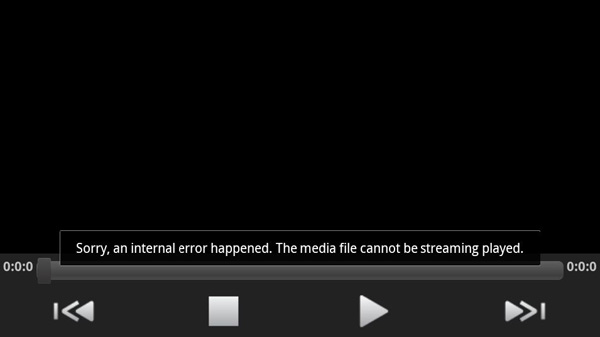 The Motoblur virtual keyboard is a pleasure to use. Its layout is spacious and pretty easy to learn. The phone provides haptic feedback for each keypress by default, but that option can be disabled. Adding words to the keyboard's dictionary is very easy, and it prevents the involuntary censorship that the latest iOS keyboard enforces upon you (I didn't mean shot!). My biggest complaint about the keyboard is that it doesn't do a great job of guessing what you were trying to type based on the location of your keypresses. Word length matching and basic spelling errors are handled well. Motorola also preloads Swype as an alternative to the Motoblur keyboard. 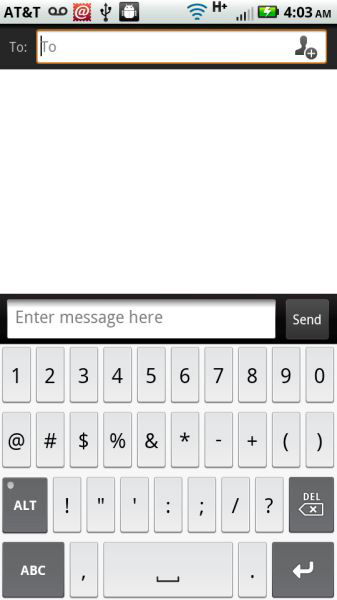 At least on AT&T, the Atrix 4G is locked down by default. Motorola removed the option to install non-market apps. Thankfully you can still push non-market apps over to the phone using adb, but you can't just copy a non-market apk over USB and install it.

The Motoblur overhead is definitely present, although it's not really noticeable from a real world performance standpoint. Everything runs smoothly (thanks to copious amounts of processing power and memory) despite there being a number of Motoblur components that autorun at launch.

Stability hasn't been a problem for me on the Atrix 4G. I only mention this because of the crashes Brian encountered on the pre-release build of Android on the Optimus 2X.

Overall I'd say Motorblur is an average UI on top of Android. The social network integration is nice and some of the widgets are handy, but I personally prefer the stock experience.

A unique addition to the Atrix 4G's software stack is its own remote access/administration utility called the Motorola Phone Portal. The Phone Portal lets you access virtually all of your phone's data via your PC. You access Motorola's Phone Portal one of two ways: via USB or WiFi. The former is more secure but only works on Windows PCs while the latter should work with anything that has a browser.

I fired up Phone Portal and connected to it over WiFi. The Atrix launched a web server on my private network which I could access by the address 192.168.1.17:8080. This is horrendously unsecure, however there is the option of requiring a user name and password to help get around that little problem. 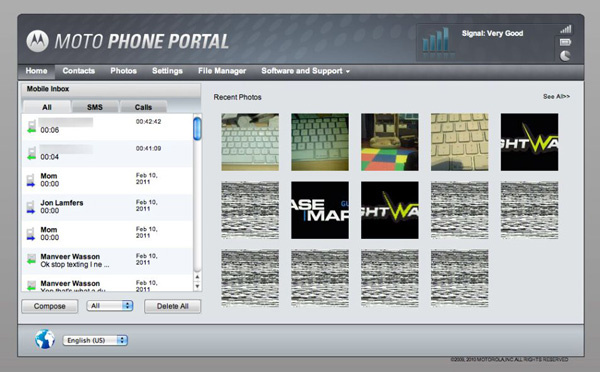 Once in the portal you can pretty much do anything you'd like. You can view/delete phone calls in your log and SMSes. You can view photos taken with the Atrix's camera or just those stored on the phone itself. You can browse through all of your contacts on the phone, edit and delete them as you see fit. It's also possible to import/export contacts via the Phone Portal.

Motorola's Phone Portal lets you play/assign ringtones, change wallpaper and even view your web browsing history - all from your computer. If you connect to the Phone Portal over WiFi you don't even need to be near your phone, it just needs to be on the same WiFi network as your computer.

In the upper right hand corner of the Phone Portal you'll get an indication of signal strength, remaining battery life and storage utilization.

The Phone Portal is unfortunately written primarily with IE in mind. Access the Portal over Chrome and some of the features won't work (e.g. File Manager).

As you'll see later on, what Motorola is trying to do with the Phone Portal and applications like webtop is enable a ubiquitous computing experience centered around the smartphone. Coincidentally, that's what HP is trying to do as well based on its announcements last week. Right now getting smartphones and tablets to easily work together is one hurdle, making those devices work harmoniously with your PC/Mac as well is just as important.

Remember the goal: any content, any device, any where, any time. Right now it's a problem because most of these devices are running different hardware and software stacks (accessing my x86 build of Photoshop on my ARM smartphone isn't really a possibility). I wonder if we'll get there by way of a common hardware/software platform that wins out over the competition, or if there will instead be some unifying software layer that makes everything just work. The web/cloud is the best example of the latter, but even then it's not perfect. This is an important problem to solve and one worth paying attention to as it will help determine the outcome in the current mobile wars.