We’ll start our look at today’s cards with the headliner: AMD’s Radeon HD 6950 1GB. As we’ve previously established our 6950 is an engineering sample – perhaps an early one – so there’s not much to look at. Save for the kind of cosmetic defects you’d expect on an engineering sample, it’s for all practical purposes identical to the production 6950 2GB, and that’s intentional. AMD set out to make the 6950 1GB identical to the 6950 2GB other than the use of lower capacity GDDR5 chips, and this is what they have accomplished. 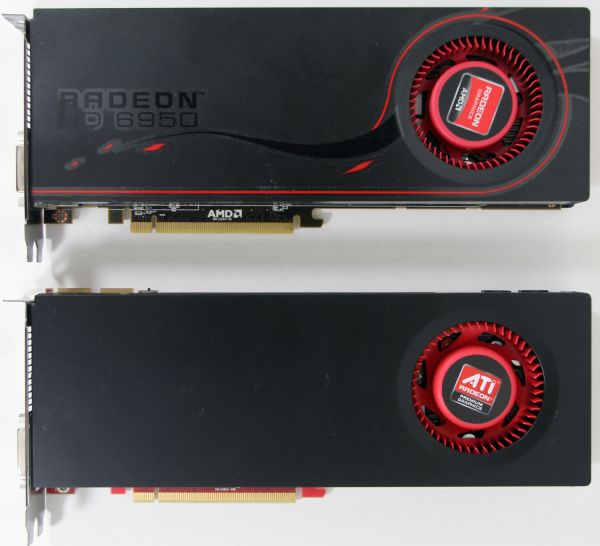 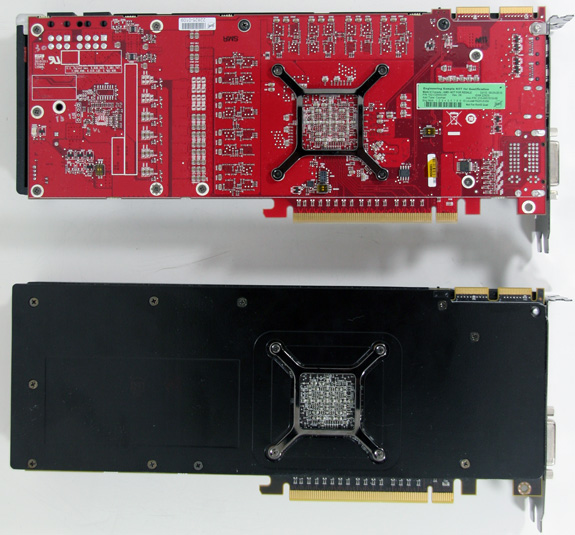 Since producing a 1GB card involves little more than replacing 2Gb memory chips with 1Gb memory chips, the true design innovations are going to come from AMD’s partners. Sapphire already has a 6950 1GB out with a custom cooler, and as AMD’s other partners get situated with 1GB cards we expect to see much of the same with them.

One item worth noting is that because our card is based on the reference design, it includes the BIOS switch at the top of the card. This means reference-based 1GB cards are going to have the same BIOS failsafe in them – however suitable BIOSes for the unlockers among you are another matter. Without some BIOS hacking (and possibly more), existing 6970 BIOSes are unsuitable as they’re meant for 2GB cards. Until such a time comes where a 6970 1GB BIOS can be developed, the 6950 1GB is not going to be a good card for unlocking. For the time being unlockers are going to want to stick to 2GB cards.

The Radeon HD 6950 1GB is launching with an MSRP of $259. At this time you can find reference-style 2GB cards for as little as $269, making the 1GB cards a rather simple $10 trade-off if you don’t mind mail-in rebates.

With such a mild overclock we had little reason to pay attention to the card, particularly once we completed our GTX 560 Ti benchmarking and saw that it was 10-20% faster than the stock-clocked 6870. Indeed it wasn’t until we tested the card that we saw something that grabbed our attention. Or perhaps I should say heard. 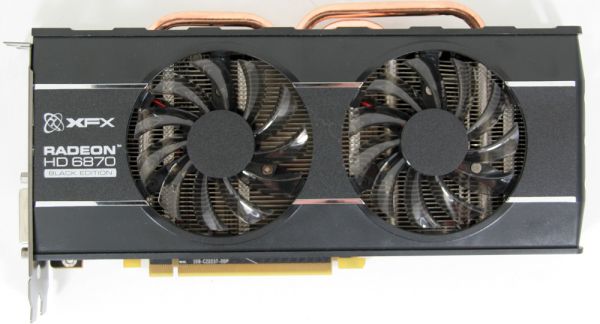 At the risk of spoiling the rest of our article, this card is for all practical purposes silent. At idle it’s only as loud as the noise floor of our GPU testbed, and at load – even under Furmark – it’s the same story. We measured 41.4dB at both idle and load, making it the quietest actively cooled mid-range card we have ever tested in our existing rig. Even the remarkably quiet GTX 460 can’t hold its ground to the 6870 Black Edition, it’s that quiet.

So what’s XFX’s secret? It’s much the same story as with the GTX 460. While the 6870 reference design uses a blower XFX is using an open-air cooler, specifically a double-fan cooler with 3 copper heatpipes that’s very similar to MSI’s Twin Frozor and Gigabyte’s Super Overclock cooler. Open-air coolers are already capable of being much quieter than blowers, and when done correctly a double-fan arrangement can be quieter than driving a single fan at higher speeds. Combining this highly effective cooler with the 6870’s Black Edition’s low TDP (~160W) results in a very quiet card that by all indications cannot be beaten at this point in time.

Rounding out the package, there are no real meaningful extras to discuss. Aside from some trinkets (stickers, case badges, etc), the only other piece of hardware in the box is a short CrossFire bridge. XFX has kept it simple: the only things that really matter are the card and XFX’s lifetime warranty.

The Radeon HD 6870 Black Edition doesn’t have a set MSRP, but it’s currently available for around $229 with a mail-in rebate, making it roughly $10 more expensive than a stock-clocked card. Or compared to XFX’s lineup, the non-Black Edition version of this card is a mere $4 less at $225; so you’re looking at a $4 factory overclock and $6 for a supurb custom cooler.