Our gaming benchmarks are in a transitional state right now on high-end laptops, since we’ve added a few titles to the mix after the last high-end review. Sure, we have the Clevo X7200 we can compare it to, but that’s in another stratosphere as far as pricing and performance. We’ve also got results for some of the games run on various notebooks during the past six month, but there will be a few gaps. Ideally, what we’d really like is to have the updated G73Jh in house with the latest AMD Catalyst drivers, and we could pit that against the 460M with the latest Verde drivers. Unfortunately, since we no longer have the G73Jh around that’s not possible. Here are the standardized results at 1600x900, with a few midrange notebooks thrown into the mix as well. We’ve also included 1080p Medium and High performance from the G73Jw, mostly because there are instances where 1080p High is too much and ideally you want to run at native resolution. So here’s how things pan out. 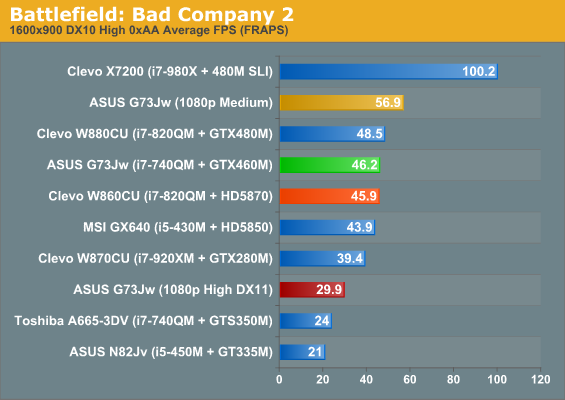 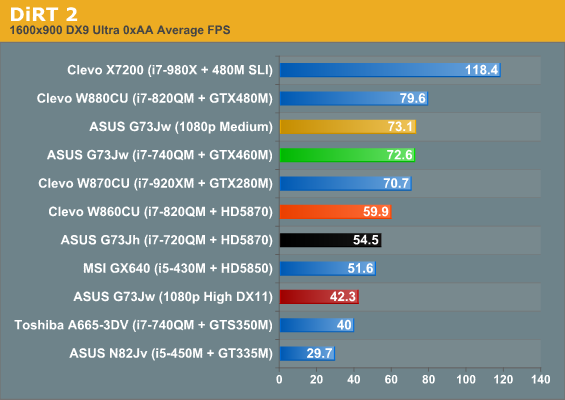 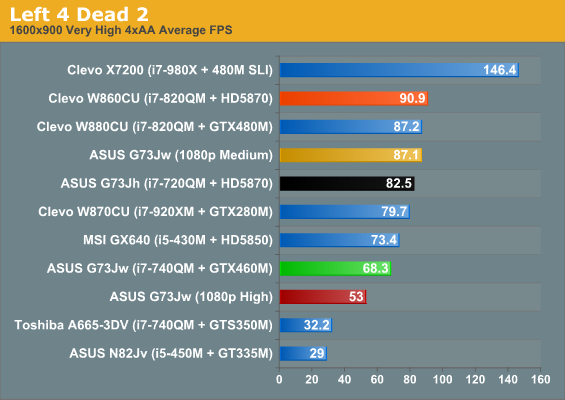 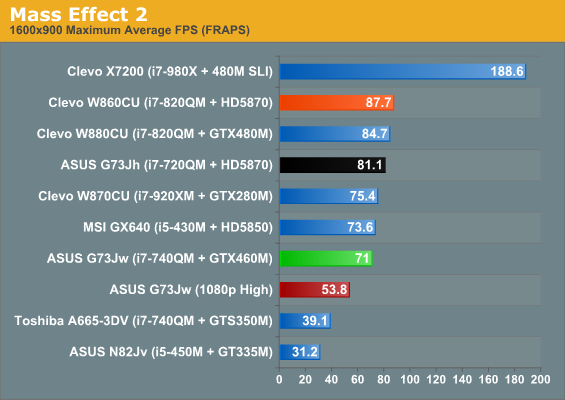 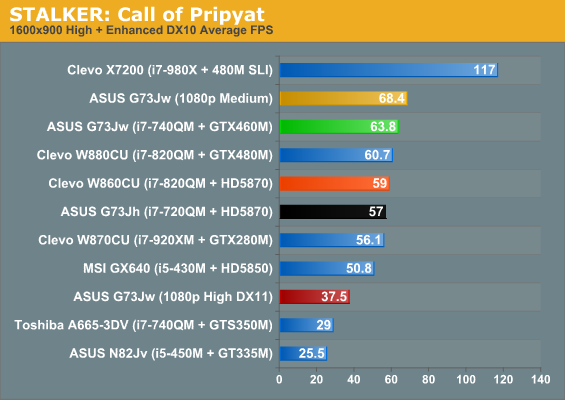 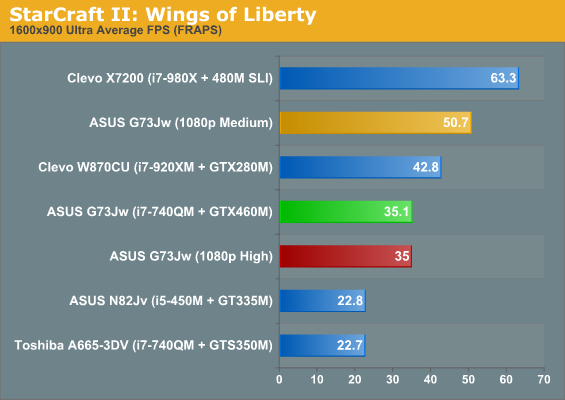 While you might be tempted to look at the G73Jh results when comparing with the G73Jw, the difference in processor and driver age makes the Clevo W860CU with 5870 a better choice. By that metric, there’s a tie in BFBC2, the G73Jw leads by 8% in STALKER, and it has a rather large 21% lead in DiRT 2. On the other hand, the W860CU with 5870 leads by 33% in L4D2 and 28% in ME2, which makes the comparison in favor of the G73Jh by a small margin. Toss in CUDA and PhysX and it’s pretty easy to call the gaming scores a wash. And while we’re talking percentages, the W880CU with 480M leads the G73Jw with 460M by 12% on average, though there’s an interesting result where the 480M scored lower in STALKER. We’ve seen some pretty healthy performance improvements from the latest 260 NVIDIA drivers, so that’s very likely a factor—and updated drivers is a concern for any of the comparisons.

We also ran some other recent titles on the G73Jw: Mafia II and Metro 2033. We only have results from one other laptop on those titles—the Clevo X7200—so it’s not really a reasonable comparison. We’ll just report the numbers for 1600x900 and 1080p and leave it at that for now. Mafia 2 managed 47 FPS at 900p “High” and 37 at 1080p “High”; dropping to 1080p Medium doesn’t help performance much (within a couple of percent of the High detail result). Metro 2033 is quite a bit more demanding, especially if you enable DX11 and the Depth of Field effect. With DX10 at “High” settings, 900p scores 31 and 1080p scores 24 FPS; DX11 with DOF cuts that down to 18 and 13 FPS, respectively; just going with DX11 (and Tessellation) without DOF only reduces performance by about 10%. Even at DX10 “Medium” the game is still quite demanding, hitting just 35FPS—playable, but not quite liquid smooth. 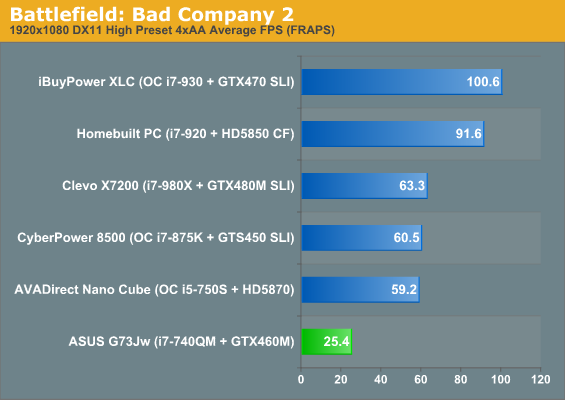 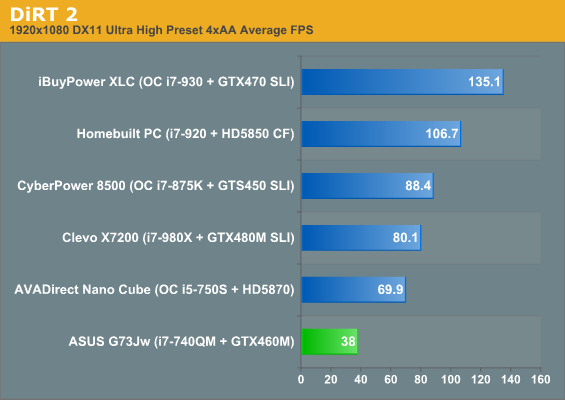 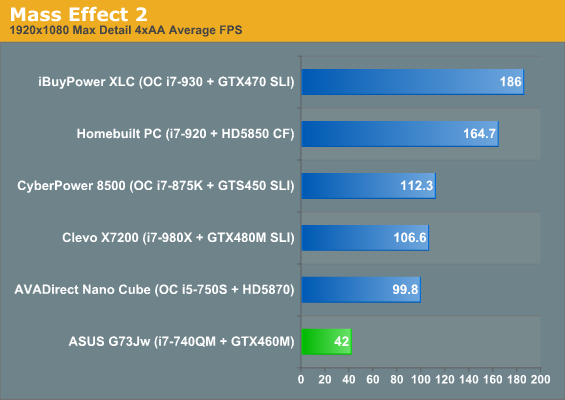 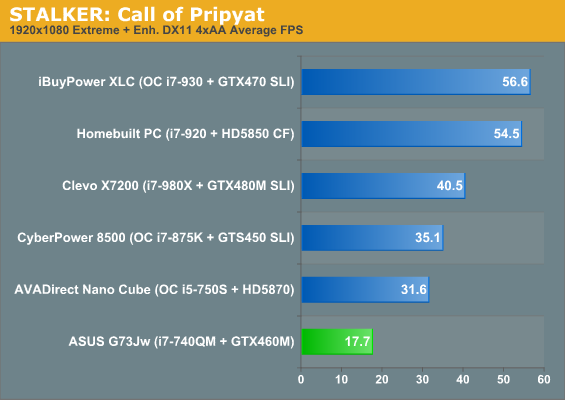 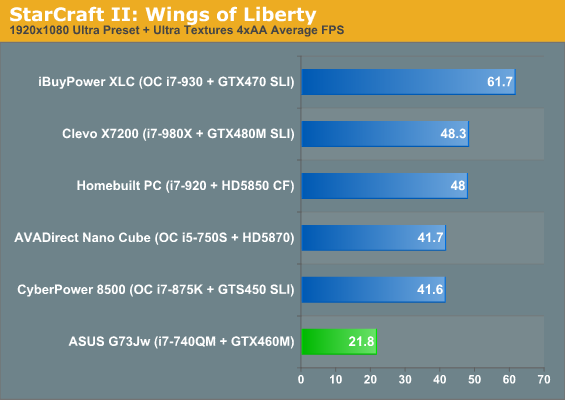 Jumping to our “Ultra” quality 1080p settings slams into a wall and many of the games drop to unplayable levels. Our comparison right now has the Clevo X7200 and a bunch of desktops, but we'll try to flesh out the charts with other notebooks over the coming months. Focusing on the G73Jw: DiRT 2, L4D2 and ME2 continue to generate results close to 40FPS, but everything else is under 30FPS. BFBC2 and SC2 are in the low to mid 20s, with a last minute beta driver drop from NVIDIA helping SC2. Besides the games shown in the above charts, Mafia II with anti-aliasing got 22FPS and Metro 2033 (DX11) drops into the single digits at just 8.4 FPS. If you want to "max out" the graphics settings on every game, you'll be disappointed, but with a bit of judicious tweaking any game can run at 1080p and still look great.

All testing was done with the shipping 260.63 drivers, but an eleventh hour beta of the 260.99 WHQL driver arrived and we ran a sanity check on the results. The initial 260.99 driver lacked support for the G73Jw, but the beta adds the necessary details and future Verde drivers should all include the G73Jw. Results in SC2 went up, though part of that may have simply been flakiness of using an older version 1.0 replay. Mass Effect 2 also improved a few percent at 900p. The rest of the results were well within the margin of error so the main concern will be anyone that plays Civilization 5, Fallout: New Vegas, Final Fantasy XIV, and Formula 1 Racing where NVIDIA specifically notes performance improvements—and even then, some of the improvements are probably still minor at best. 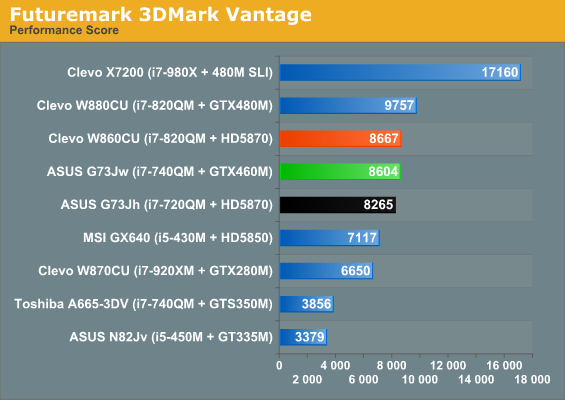 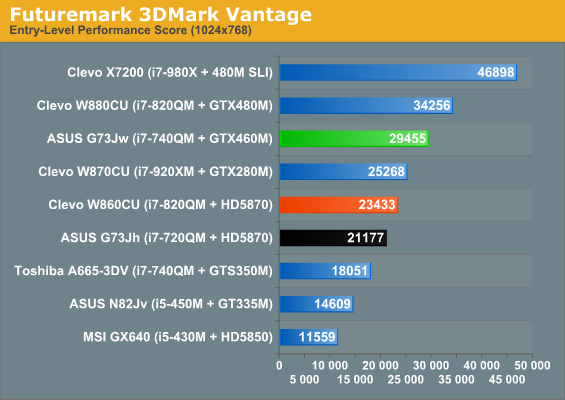 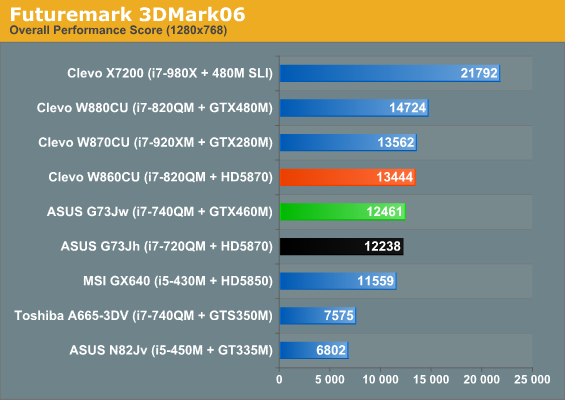 We’ve also got results from 3DMark Vantage and 06 as another aspect of graphics performance. Oddly enough, the G73Jw scores very well in the Entry-Level Vantage score, and essentially matches the W860CU in the Vantage Performance test. 3DMark06 gives the W860CU the win by a fairly large amount over the Jw, with the Jh bringing up the rear. You can take this either as an indication that 3DMark can be similar to certain games, or that it’s not a game and therefore doesn’t matter; we provide the results merely as one more item to look at in the overall picture.