As we mentioned in our look at the new Forceware 260 driver set, the drivers provided by NVIDIA for our testing of the GTS 450 have a broken OpenCL component, so we had to cut our compute benchmarking short by dropping our OpenCL benchmark. Furthermore our pre-release version of Badaboom with Fermi support doesn’t work either, so that also was dropped. What we offer instead is a much more abbreviated look at the GTS 450’s compute performance.

As was the case with GF104, GF106 is a superscalar design. With 2 warp schedulers, only 2 banks of 16 CUDA cores per SM can be put in use unless NVIDIA’s hardware can extract a degree of instruction level parallelism from the resulting code. As a result all of these GF104-derrived GPUs have a wider range of compute performance than what we’re used to. At the best case scenario of being able to extract ILP every clock, we achieve peak theoretical performance. The worst case scenario is 2/3rds that performance. So the GTS 450 can perform between a 192 CUDA core and 128 CUDA core card depending on the application in use. 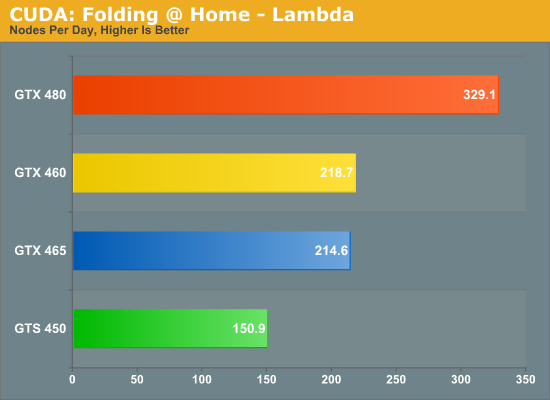 For our look at computing performance we once again have the CUDA version of Folding @ Home. Using the Lambda work unit, we run a short benchmark that extrapolates the number of nodes per day the card would be able to process. All things considered the GTS 450 does quite well here compared to the rest of the Fermi family thanks to its high clock speed. It may only have around 57% as many CUDA cores as the GTX 460, but the higher clockspeed means that it’s just shy of 70% of the performance. Furthermore we’ve already established that this benchmark isn’t L2 cache or memory bandwidth limited, so even though the GTS 450 isn’t using a “full” GF106 chip here, it isn’t penalized for the limitation. 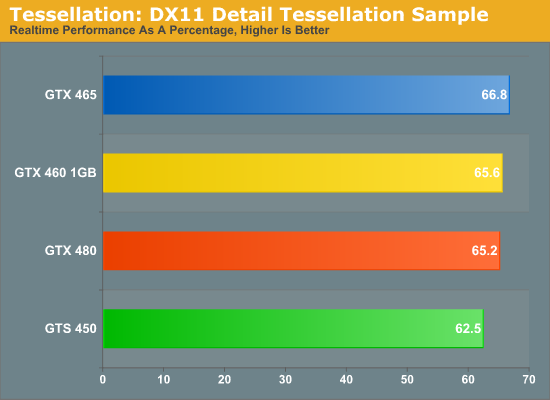 Our other benchmark is a quick look at tessellation. With the DirectX 11 Detail Tessellation sample program, we’re primarily looking at whether we can throw a high enough tessellation load at the GPU to overwhelm its tessellation abilities and bring it to its knees. In this case we cannot, as the GTS 450 scales from tessellation factor 7 to tessellation factor 11 by only a little below the rate of the GTX 480 and GTX 460, achieving 63% of its performance at factor 11 . This means that the GTS 460 should still has plenty of tessellation power for even this demanding sample, but of course this is heavily dependent on how much tessellation is used by future games.

One interesting thing is that because NVIDIA built its geometry units in to its Polymorph Engines, their geometry abilities scale in a way that AMD’s doesn’t thanks to AMD’s relatively constant fixed-function pipeline in the Radeon HD 5000 series. With the GTX 480 NVIDIA was advertising an 8-fold increase in geometry performance over the GTX 285, but with the GTS 450 NVIDIA is only talking about around a 2.4x increase over the GTS 250. This neatly showcases the much wider range of geometry performance in NVIDIA’s Fermi family. It also reinforces the fact that they need developers to fully utilize tessellation in order to maximize the geometry capabilities of the GTX 480, otherwise if a card like the GTS 450 is the geometry baseline, then scaling geometry capabilities through the Polymorph Engines will not have paid off.