Two years ago when I first covered Intel’s Atom architecture I proposed that Moore’s Law has paved the way for two things: 1) ridiculously fast microprocessors, and 2) fast enough microprocessors.

The first category is used to push the bleeding edge of software. Everything from scientific computation to 3D gaming. If it’d never been done before, Moore’s Law enabled companies like AMD, Intel and NVIDIA to build the microprocessors we needed to make it happen.

The second category is a more recent development. If you don’t need the compute power, Moore’s Law enabled the creation of smaller, cheaper, more power efficient microprocessors to deliver performance that’s good enough. These types of chips are found in everything from netbooks to smartphones.

A number of folks are arguing that the same approach can be applied to server workloads. They argue that the majority of time the servers that drive your favorite websites or cloud services are idle, at least from the CPU perspective. For servers that aren’t virtualized, this is largely true. You don’t build servers for average load, you build them to make sure they can withstand maximum load. The unfortunate result is that when these servers are running during periods of low traffic, they aren’t very power efficient.

For a small operation like AnandTech this isn’t much of a problem. But on a larger scale, it adds up. Data centers are easily power constrained. High density servers give us dozens of microprocessor cores in the space of several rack units. That’s great for compute, but terrible for power consumption.

Also keep in mind that even the slowest servers you can buy today are still pretty powerful. In many cases you need physical box redundancy but not the added horsepower of having more hardware. Add in live fail-over support to minimize downtime and you’ve got even more wasted power.

Today if you don’t need the performance a multi-core Xeon can offer you, but you need tons of physical servers, there are very few options. You can stick with a simple single core server but then your power consumption even at idle is still in the range of dozens of watts. You could make the argument that as CPUs get more powerful, there’s room for a category of “fast enough” servers. And thankfully we already have a processor that’s “fast enough”. The Atom.

Take 512 Atom based servers, cram them into a box that consumes 2kW of power, give it boatloads of networking and you’ve got the SM10000 by SeaMicro. This $139K box is designed to replace dozens of quad core Xeon/Opteron boxes that remain idle most of the time. According to SeaMicro if your business model is that you’re giving something away for free on the Internet, then the SM10000 might be for you. 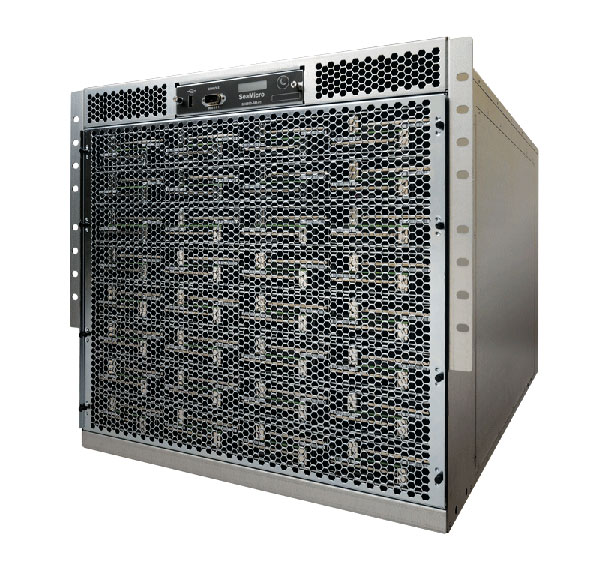 SeaMicro’s CEO comes from the network field, while its CTO is a former Sun and AMD microprocessor architect (he was apparently one of five chief architects on AMD’s Bulldozer core). The company not only makes the 512 Atom server but also a custom ASIC inside that makes the technology work. 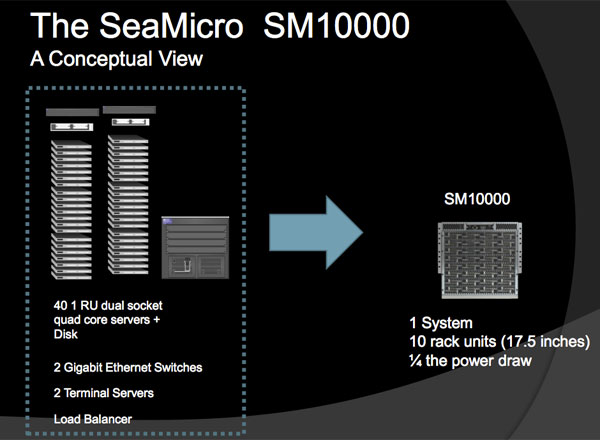 The SM philosophy is simple; you don’t take a space shuttle to the grocery store. If you don’t need such a beefy server for your workload, why continue to use one?