In our GTX 480 review, we identified both the GTX 480 and GTX 470 as being abnormally hot & loud. Perhaps with the reduction in functional units and a lower memory clock speed NVIDIA will be able to bring this in to check? Let’s find out.

Let’s first start with core voltage. For the GTX 400 series NVIDIA does not use a single voltage for each card, instead they assign voltage on a per-chip basis. So while there are trends we can look at, there is no absolute single voltage as we’ve seen on past cards. The following is the load voltage on each of our sample cards.

NVIDIA is dealing with some very tight thermal and power requirements on the GTX 480 and 470 – getting a 3 billion transistor chip to not run amok drawing power is hard work. From this we can infer that NVIDIA is not only holding back chips with damaged functional units, but also chips that run but just take too much voltage (and ultimately power) to do so. With fewer functional units, the GTX 465 has a greater tolerance for high-voltage chips and it looks like this is where NVIDIA is sending some of them as a result. This is why there’s only a 15W TDP difference between the two cards: NVIDIA “spent” their savings getting lesser GF100 GPUs in to products. So going by voltage alone, it’s clear that we’re not going to see the GTX 465 receive a huge benefit in terms of power, temperature, & noise. 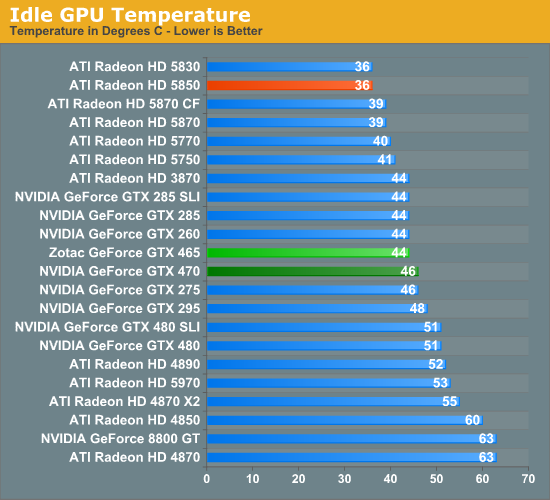 Moving on to our charts, we’ll start with idle temperatures. Even with the same idle voltage and same cooler as the GTX 470, the GTX 465 delivers a slight surprise: it ends up idling at 2C under the GTX 470. This puts it squarely in the same territory as the GTX 200 series. 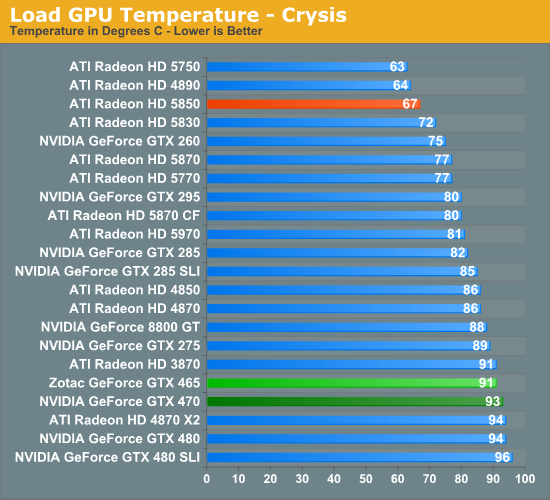 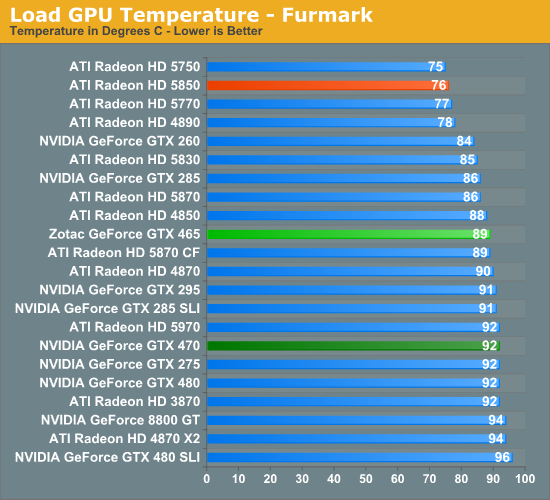 Moving on to load temperatures, we can begin to see the price of using a GPU with a higher core voltage. Under Crysis that 2C advantage over the GTX 470 holds, with temperatures peaking at just 91C. This still makes it the 3rd hottest single-GPU card we have tested, tieing with the Radeon HD 3870 and coming in 24C hotter than the 5850, a card it underperforms in this game. 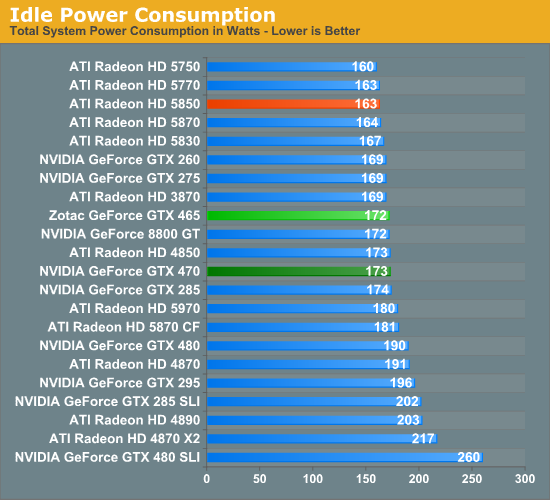 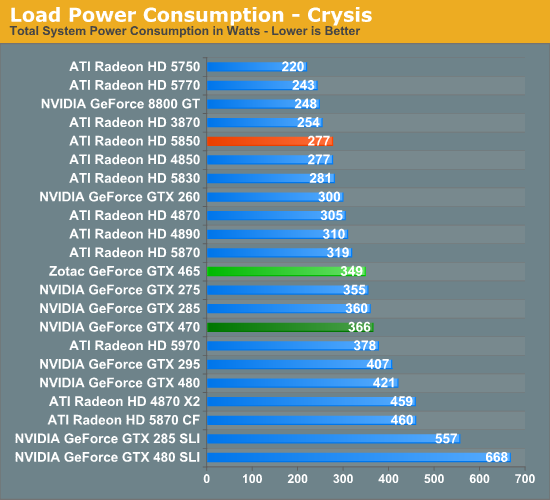 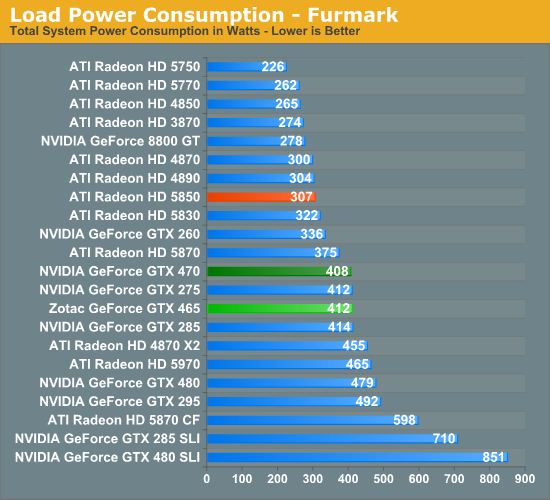 As for load power draw, having seen our temperature results the actual power figures should not be a surprise. Under Crysis the GTX 465 has more in common with the GTX 470 than the power-saving Radeon HD 5000 series, drawing 17W less than the GTX 470 and 72W more than the 5850. Based on our voltage numbers from earlier and this data, it’s clear that NVIDIA had to give up a lot of power savings to make this specific GPU operate.

Meanwhile under FurMark we see those savings evaporate in to nothingness. Here the GTX 465 actually surpasses the GTX 470 by 4W, coming in at 412W versus 408W. At this point it’s drawing as much power as a GTX 275/285, and 105W more than the Radeon 5850. We did not expect the GTX 465 to end up drawing more power than the GTX 470 here, as the 2 fewer RAM chips should have offset the difference. Looking at just the GPU, there’s a good chance the GPU in our GTX 465 card is drawing more power than the GTX 470 under most situations. 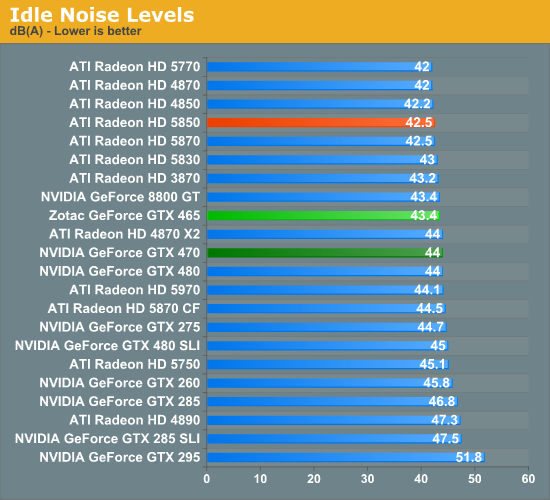 Last but not least we have our noise testing. As the GTX 465 uses the same cooler as the GTX 470, the results should be very close and our idle noise measurements deliver on that. Our GTX 465 idles at 43.4db(A), effectively tied with the GTX 470 and only marginally different than most of the rest of our cards. 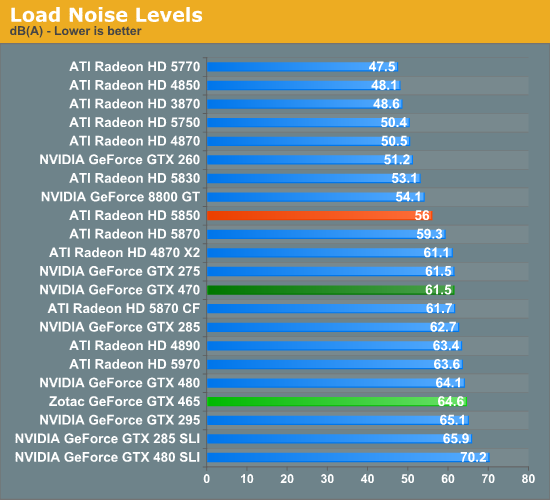 Our best guess here is that with the GTX 465’s higher operating voltage, NVIDIA wanted a slightly lower operating temperature to compensate. As with any other case where we’ve only measured a single card there’s the possibility of a great deal of variation, but what we’ve seen makes sense. Across the entire spectrum of GTX 465 and GTX 470 cards it’s reasonable to assume this data is correct and that the GTX 465 is on average a couple of db(A) louder than the GTX 470.

It goes without saying that this isn’t a reasonable amount of noise for the performance the card delivers. The Radeon HD 5870 is 5dB(A) quieter, and the 5850 extends than to 8dB(A) quieter. At these noise levels 8dB(A) is a very noticeable difference.