In the Pentium 4 days Intel quickly discovered that there was a ceiling in terms of how much heat you could realistically dissipate in a standard desktop PC without resorting to more exotic cooling methods. Prior to the Pentium 4, desktop PCs saw generally rising TDPs for both CPUs and GPUs with little regard to maximum power consumption. It wasn’t until we started hitting physical limits of power consumption and heat dissipation that Intel (and AMD) imposed some limits.

High end desktop CPUs now spend their days bumping up against 125 - 140W limits. While mainstream CPUs are down at 65W. Mobile CPUs are generally below 35W. These TDP limits become a problem as you scale up clock speed or core count.

In homogenous multicore CPUs you’ve got a number of identical processor cores that together have to share the maximum TDP of the processor. If a single hypothetical 4GHz processor core hits 125W, then fitting two of them into the same TDP you have to run the cores at a lower clock speed. Say 3.6GHz. Want a quad-core version? Drop the clock speed again. Six cores? Now you’re probably down to 3.2GHz.

This is fine if all of your applications are multithreaded and can use all available cores, but life is rarely so perfect. Instead you’ve got a mix of applications and workloads that’ll use anywhere from one to six cores. Browsing the web may only task one or two cores, gaming might use two or four and encoding a video can use all six. If you opt for a six core processor you get great encoding performance, but worse gaming and web browsing performance. Go for a dual core chip and you’ll run the simple things quickly, but suffer in encoding and gaming performance. There’s no winning.

With Nehalem, Intel introduced power gate transistors. Stick one of these in front of a supply voltage line to a core, turn it off and the entire core shuts off. In the past AMD and Intel only put gates in front of the clock signal going to a core (or blocks of a core), this would make sure the core remained inactive but it could still leak power - a problem that got worse with smaller transistor geometries. These power gate transistors however addressed both active and leakage power, an idle core could be almost completely shut off.

If you can take a single core out of the TDP equation, then with some extra logic (around 1M transistors on Nehalem) you can increase the frequency of the remaining cores until you run into TDP or other physical limitations. This is how Intel’s Turbo Boost technology works. Depending on how many cores are active and the amount of power they’re consuming a CPU with Intel’s Turbo Boost can run at up to some predefined frequency above its stock speed. 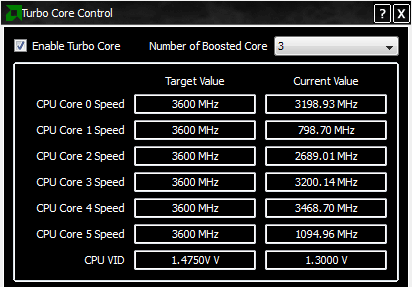 With Thuban, AMD introduces its own alternative called Turbo Core. The original Phenom processor had the ability to adjust the clock speed of each individual core. AMD disabled this functionality with the Phenom II to avoid some performance problems we ran into, but it’s back with Thuban.

If half (or more) of the CPU cores on a Thuban die are idle, Turbo Core does the following: 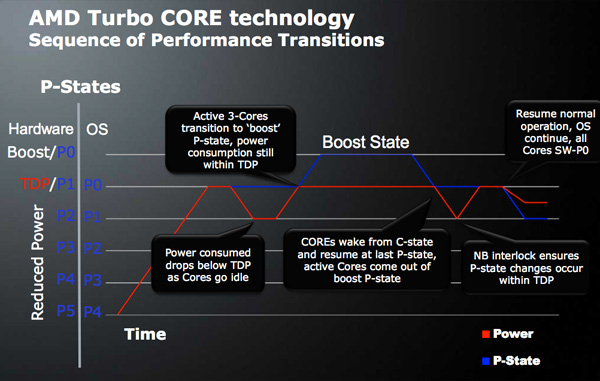 The end result is the same as Intel’s Turbo Boost from a performance standpoint. Lightly threaded apps see a performance increase. Even heavily threaded workloads might have periods of time that are bound by the performance of a single thread - they benefit from AMD’s Turbo Core as well. In practice, Turbo Core appears to work. While I rarely saw the Phenom II X6 1090T hit 3.6GHz, I would see the occasional jump to 3.4GHz. As you can tell from the screenshot above, there's very little consistency between the cores and their operating frequencies - they all run as fast or as slow as they possibly can it seems.

Turbo Core generally increased performance between 2 and 10% in our standard suite of tests. Given that the max clock speed increase on a Phenom II X6 1090T is 12.5%, that’s not a bad range of performance improvement. Intel’s CPUs stand to gain a bit more (and use less power) from turbo thanks to the fact that Lynnfield, Clarkdale, et al. will physically shut off idle cores rather than just underclock them. 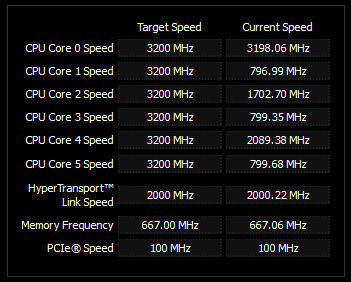 I have noticed a few situations where performance in a benchmark was unexpectedly low with Turbo Core enabled. This could be an artifact of independent core clocking similar to what we saw in the Phenom days, however I saw no consistent issues in my time with the chip thus far.