Benchmarking under OS X isn’t difficult, you just need to get creative. Luckily I’m in dire need of creative outlets so creating OS X benchmarks works for me. I’m using the same tests I introduced in my Holiday 2009 Macbook Pro roundup and running on the same hardware (specs listed in the tables on the previous pages). The Core i5 system is the new entry level 15-inch MacBook Pro. 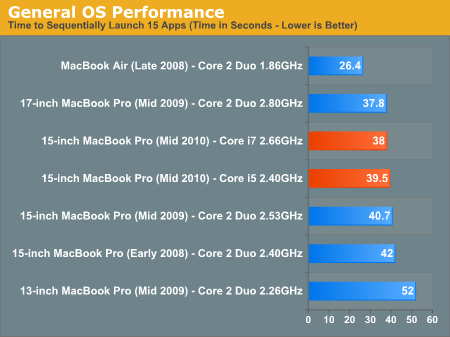 My application launch test absolutely rocks on the MacBook Air because it ships with an SSD by default. The MacBook Pros are stuck with mechanical hard drives and thus don’t perform nearly as well. If you’re curious, installing an Intel X25-M G2 in any of the MBPs will drop their times to 16 seconds or less.

The new MacBook Pro also doesn’t improve performance that much. I measured a 3% increase in performance, which although repeatable, isn’t really spectacular. This is compared to the old 2.53GHz Core 2 Duo and should serve as a baseline for the minimum performance improvement you should see. In other words, the 2.4GHz 15-inch MacBook Pro should perform no worse than last year’s 2.53GHz model.

The $2199 model with a Core i7 running at 2.66GHz pushes performance up another 3.9% over the base model. That's actually more than I expected but the real strength of the i7 is visible in the more CPU bound tests. 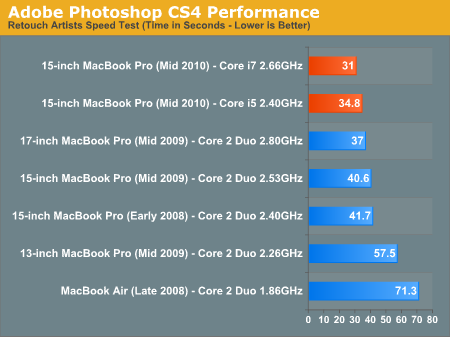 The old 13-inch MacBook Pro is penalized by only shipping with 2GB of memory, which is why it performs so poorly here. The real comparison is between the 2.4GHz Core i5 vs. the 2.53GHz Core 2 Duo from last year. The former is 16.6% faster in our Photoshop test. In fact, the new 15-inch MacBook Pro is even faster than the older 2.80GHz 17-inch model I reviewed.

The Core i7 model is 12.3% faster than the baseline Core i5 2.40GHz. Definitely noticeable. 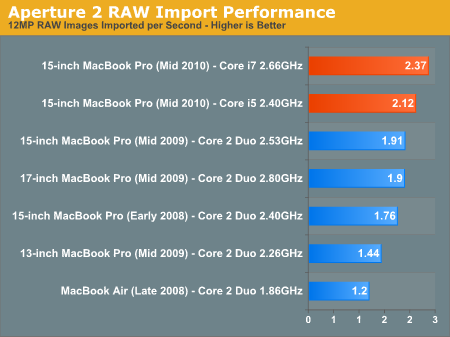 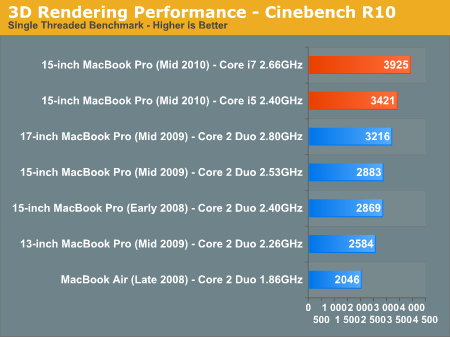 Here we have a huge advantage on the new MacBook Pro. Intel’s Turbo Boost is active here, resulting in a large performance advantage, not to mention all of the enhancements present in the Nehalem/Arrandale architectures. This is one of the best situations for the Core i7 vs. the i5. The extra $400 gives you another 14.7%, not bad at all. 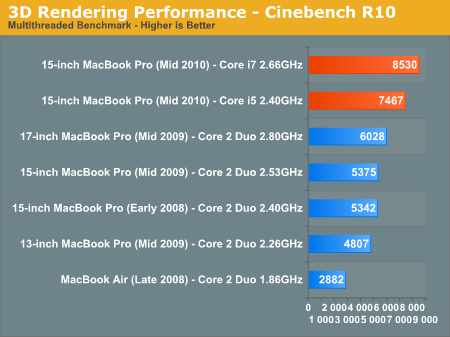 Thanks to Hyper Threading, the new Core i5 puts a generational gap between itself and last year’s MacBook Pro in this test. Whether you’re running single threaded or multithreaded applications, the Core i5 can be noticeably faster than the Core 2 Duo. 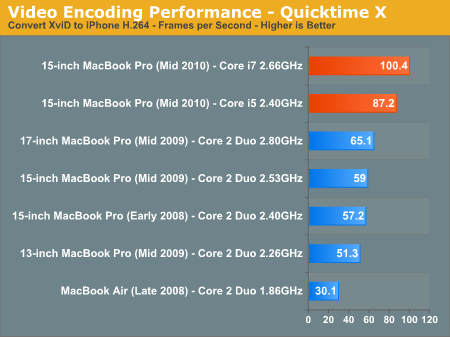 Video encoding is one of the i5’s definite strengths. If you do a lot of video encoding on your notebook, the jump from Core 2 to i5 is tremendous - approaching 50% in this case even despite the “lower” default clock speed. This is also the best showing for the Core i7 - count on an extra 15% over the base Core i5.

Core i7 vs. Core i5 Performance Summary

While I don't believe there's much reason to go for the 2.53GHz over the 2.40GHz model (L3 cache size remains the same, clock speed goes up by a small amount), the Core i7 is actually pretty decent.  For a 22% increase in total system cost you end up with 11 - 15% better performance in CPU bound applications. It actually even feels snappier in general use as well.

I'd still suggest opting for an SSD before considering any CPU upgrades, but if you're looking to keep your new MacBook Pro for a while the Core i7 is worth it.