Apple drew a line in the sand with the iPad. It set expectations for performance, price point, usability, ergonomics, display and quality of apps. It's rare that Apple does this. Normally Apple capitalizes on the mistakes of those who came before it by using failure as a blueprint for success. The fact that Apple is taking a different route with the iPad does say something about where Apple views this business going. As the computing market grows and incorporates new users, the need for simpler as well as more powerful/complex compute devices grows. Apple appears to be going after the former early on. Perhaps it wants the iPad to be to the tablet, what the Eee PC was to the netbook.

As a piece of hardware, the iPad generally does its job well. We could always use more processing power, which is made more evident by the larger screen and thus higher user demands on the system (Intel did have a point with restricting Atom's usage to smaller screen devices only). The lack of any integrated camera is bothersome but I doubt at this point we'd have a great video chat application to use given the current state of the iPad app union. 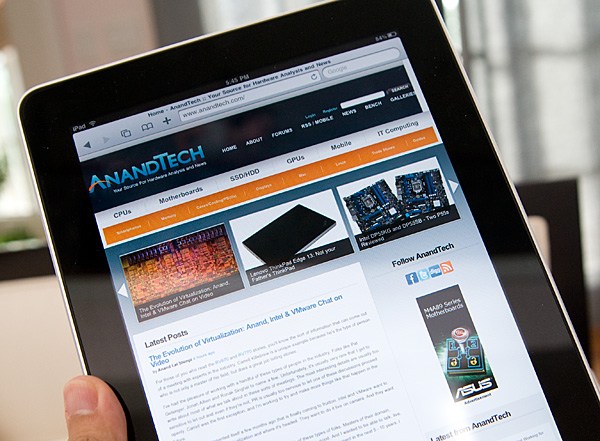 The nickel and diming on accessories is annoying, especially given that you'll probably need at least one of them. Not to mention that you should be prepared to spend at least 10 - 20% extra on apps as soon as you get the device. Apple did a good job with the $499 entry level price point, but the extras and any additional flash memory you might want come at extortionist prices. I don't expect Apple to really do anything about it given there's no competition in this segment right now.

It's an issue because the iPad can't currently replace any existing device you own. It lacks the voice features of a smartphone, and it lacks the flexibility/performance/ergonomics of a notebook. This is a 2nd, 3rd or 4th computer, and as such the expenditure is in addition to your existing computer budget.

Although it doesn't replace any of your existing devices, there are some things the iPad does much better than anything you might own today. Web browsing, photo viewing, reading email, any passive usage scenarios where you're primarily clicking on things and getting feedback, the iPad excels at. You do lose Flash support so if that's an issue to you stop now. But personally, I don't find the lack of Flash a problem assuming that companies like Hulu are working on HTML5 versions of their web portals.

I do like the idea of the away-from-the-PC (or Mac) computing the iPad offers. It's a different type of device; one that's more comfortable to just read websites on, or lightly peruse email with.

I can see myself leaving the notebook at home and taking the iPad on some short trips, both business and personal, as long as I don't need to do any photo editing or publishing from the road. For my purposes, I'm better served by the forthcoming 3G model. But I'd still need my desktop, and I'd still need my notebook for when I needed to get actual work done on the go. This goes back to my earlier point though, the iPad is a luxury, a convenience, not a necessity. It augments my current digital lifestyle and I'd argue that it improves it, but it doesn't replace anything in it.

That could quickly change depending on the types of apps we see crop up for the device. Photographers are already very interested in the device, but you'd win their hearts if you could make the iPad a productivity tool. Home automation is just begging to be enabled via the iPad. Companies like Crestron and AMX supply ridiculously poor touch screen interfaces to their very expensive home automation installations. The iPad would be the perfect HA controller. It's a great information consumption device today, and with the right developers working on it (many of which are) it could be a great productivity device tomorrow.

Gaming on the iPad
Tweet
PRINT THIS ARTICLE
Comments Locked