Today we have something a bit different for you from the GPU world: aftermarket cooling. Thermalright sent over a complete aftermarket GPU cooling kit for our Radeon 5870 containing 3 of their products: their Spitfire GPU heatsink, their VRM-R5 VRM heatsink, and their X-Silent 140mm fan, which combine to form one truly monstrous GPU cooler.  Thermalright claims that they got a 32C reduction in the load temperature of a Radeon 5870 in their labs, so let’s put this to the test and see if their latest cooler is as good as they claim it is.

Starting with the Spitfire, the Spitfire is Thermalright’s latest and most massive GPU cooler, and is completely unlike anything we’ve seen before. Forget an aftermarket cooler in the form of a larger traditional dual-slot cooler – this throws that idea right out the door. Instead the Spitfire is best described as a heatsink so big that it has to be mounted above a video card. It’s that different. 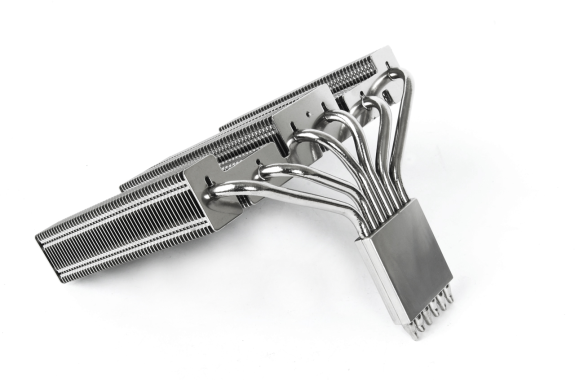 Fundamentally the Spitfire is a 15cm x 12cm aluminum heatsink designed to offer a very large surface area (and hence heat dissipation) that a regular single/dual slot cooler can’t match. In order to accomplish this Thermalright had to build the Spitfire in such a manner where the heatsink is separate from the card, leading to its odd design. Attached to the heatsink proper is a set of 6 heatpipes with a 90 degree bend that run down to a smaller nickel-plated copper base that makes contact with the GPU die. The net result of this is that when mounted to a video card the Spitfire sits above it, running perpendicular to the card. 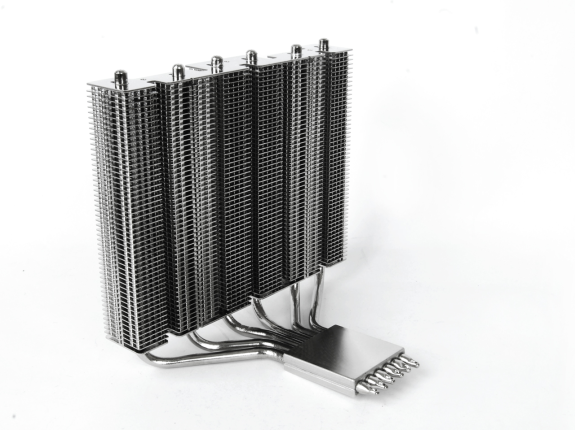 One thing pictures can’t show is just how heavy the Spirfire is. At 550g (1.2lbs) it’s a mass of metal that’s not entirely stable on its own. With the limitations imposed by the mounting features of most video cards, the Spitfire is only mounted through the 4 mounting holes around the GPU on most video cards, resulting on all 550g being distributed over a fairly small area. For that reason the Spitfire includes its own retention kit that screws in to a case’s motherboard standoffs in order to provide additional support for the heatsink so that it doesn’t warp or break the video card.

Thermalright keeps a compatibility chart for the Spitfire that lists which cards they’ve found it fits on, and whether any separate coolers are needed for other parts of card. Of our modern cards the Spitfire works on the Radeon 5800 series, the Radeon 4800 series, and a number of low-end cards, but not the GeForce GTX 200 series. Thermalright tells us that the Spitfire will also work on the GeForce GTX 400 series, which is a configuration they’ll be supporting shortly after those cards launch once they finish building the new VRM heatsink required to fit on those cards.

Officially the Spitfire can be run in a purely passive configuration if mounted on a video card close enough to a CPU cooler such that it sits above a downward-blowing cooler such as Intel’s reference cooler. Undoubtedly this works fine for lower-end cards, but for testing it on our Radeon 5870 we went ahead and tested it in an active configuration. In this configuration a 120mm or 140mm fan can be mounted on top of the Spitfire to provide dedicated airflow to the heatsink. For our review kit Thermalright included their X-Silent 140 fan (sold separately), a 60.4CFM/900RPM 140mm fan that they rate at 20.9dBA. Note that this fan adds another 170g to the weight of our complete cooler configuration. 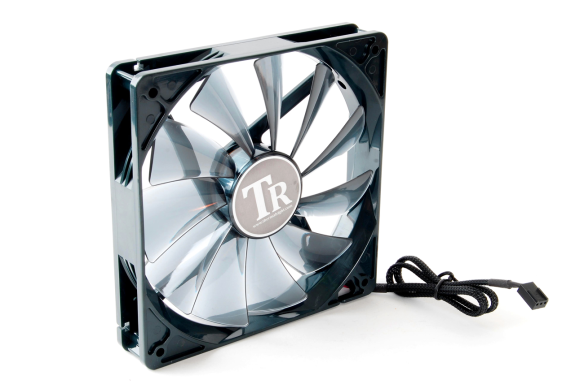 On a final note about the Spitfire, as it’s only a GPU cooler, the Spitfire kit also includes smaller stick-on heatsinks for other components. Thermalright packs the Spitfire with a number of various-sized heatsinks designed to cover RAM chips and VRMs. Even GDDR5 doesn’t get all that hot so these heatsinks do an adequate job for cooling the RAM, but on higher-end video cards such as the Radeon 5800 series this is insufficient for the VRMs. For that reason our review kit included a third product: a separately mounted VRM heatsink just for the Radeon 5870 we used to test the cooler. 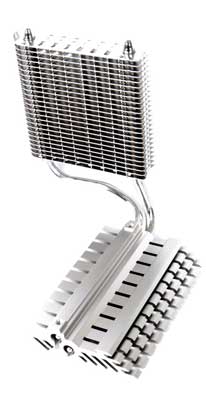 Thermalright’s recommended VRM heatsink for the 5870 is the VRM-R5, which was specifically designed for the reference 5850/5870 PCB. Like the Spitfire it’s another heatsink that is mounted away from the card and ends up running perpendicular to it, right next to the Spitfire once fully assembled. The VRM-R5 has a pair of heatpipes leading from the heatsink proper to a smaller, more solid heatsink that goes over the VRMs. Here Thermalright uses a silicone strip on the VRM-R5 to make contact with the VRMs. The VRM-R5 can have an 80mm fan mounted on top of it like the Spitfire can with a larger fan, however Thermalright did not include one with our review kit nor did we need one given the cool temperatures this purely passive heatsink configuration offered. The VRM-R5 is another 140g, bringing the total weight of the assembled cooler to 860g (1.9lbs).

Assembling the entire Spitfire kit can take a bit of time, largely due to the number of small parts involved such as washers, nuts, and thumbscrews. Thermalright includes a tube of their Chill Factor thermal paste with the Spitfire, which gave us a bit of trouble. It’s fairly thin once you can get it to run, but we had trouble getting it to run in the first place, resulting in us forcing a large glob out at once and on to our Radeon 5870. It’s electrically non-conductive which means it’s not going to be the most thermally conductive paste on the market, but at the same time it’s a great deal safer for when you do get it all over the place like we did. 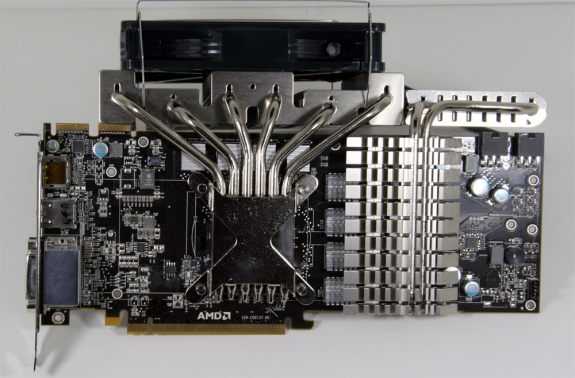 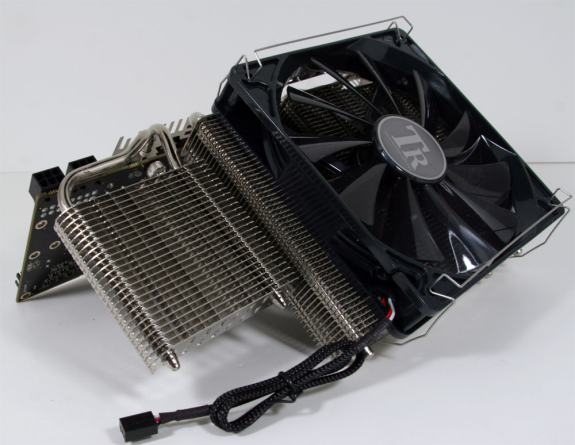 Given the height of the assembled cooler with a 140mm fan, the cooler came within inches of the side panel of our Thermaltake Spedo case. This is by no means a definitive test, but we believe that most cases only offer a similar amount of room. So at this point it’s our belief that you would be best served using the Spitfire in a case with venting on the sides so that the fan has room to draw in fresh air. 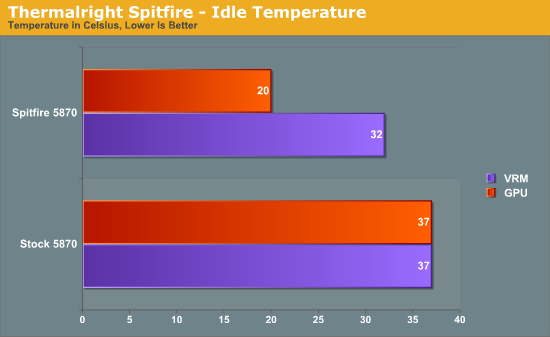 Let’s start with temperatures. With the Radeon 5870’s very low 27W idle power usage it’s no slouch when it comes to idle temperatures, coming in at 37C for the GPU and 37C for VRM #4. Meanwhile the Spitfire brings that down even further, bottoming out at the room temperature in our lab: 20C. Meanwhile the VRM-R5 cooled VRM #4 comes in at 32C, a smaller but still noticeable difference. 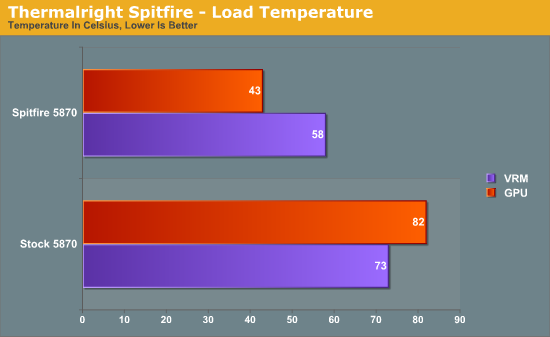 It’s our load temperatures that are the big story. Under load our stock 5870 increases to 82C for the GPU, a very middle of the road temperature for a 5870. However with the Spitfire and Thermalright’s X-Silent 140 attached, our load temperature under FurMark is a mere 43C, 39C less than the stock cooler. At this point our Radeon 5870 is only 23C above room temperature in spite of the fact that it’s running the most grueling load test we have, giving us a GPU temperature no worse than a hot summer’s day.

Meanwhile on the VRM side of things our stock 5870 hits 73C for VRM #4. The VRM-R5 on the other hand brings those VRM temperatures down to 58C, a 15C reduction. This isn’t as profound as the Spitfire’s effect on our GPU’s core, but at the same time it’s entirely passive unlike the Spitfire. 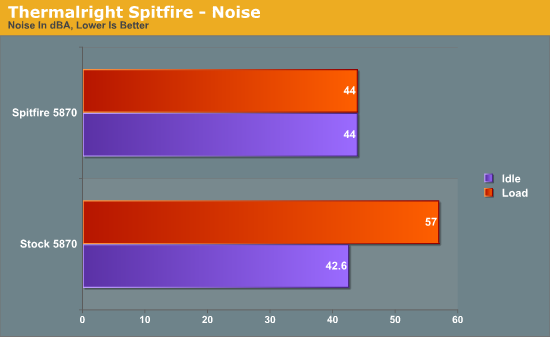 Our other amazing story here is acoustics. Since the X-Silent 140 is a fixed-speed fan, it’s no noisier under load than it is at idle. For idle noise this puts it at a slight disadvantage, as our stock 5870 hits 42.6dBA while the Spitfire-equipped 5870 hits 44dBA. But under load we’re still at 44dBA for the Spitfire while our stock 5870 has gone up to 57dBA. As such the moderately loud 5870 is rendered near-silent.

At nearly $110 for the entire Spitfire + VRM-R5 + X-Silent 140 kit, the Spitfire kit is not a bargain, but it’s hard to argue with the results. Compared to our Radeon 5870’s stock cooler it’s 39C cooler and 13dBA quieter, rendering a moderately hot and moderately loud card a cool and near-silent. For someone looking to run a Radeon 5870 with as little noise as possible, the Spitfire kit will certainly do the trick. Overclockers should also be pleased, but we’re going to refrain from commenting on the matter too much since our Radeon 5870 is a bit of a dud – it won’t give us more than 910MHz at any reasonable level of voltage even with the Spitfire.

As we mentioned previously, the Spitfire will also work on the GeForce GTX 400 series when paired with Thermalright’s forthcoming VRM heatsink for those cards. As the GeForce GTX 480 in particular is a much hotter and much louder card than the Radeon 5870, it’ll be interesting to see if the Spitfire can offer a similar improvement for NVIDIA’s latest cards. A 44dBA GTX 480 operating in the 50C-60C range would be an entirely different beast than what's being released next week.