With all the gaming performance on tap, and despite the lack of Optimus Technology, the M11x still manages to deliver great battery life results. Alienware puts an 8-cell 63Wh "Prismatic" battery in the M11x, which is quite large for an 11.6" chassis. Even better is that Alienware manages to keep the chassis looking clean, as opposed to designs like the Dell 11z where the large 6-cell battery juts out the bottom. We calibrated the LCD for ~100nits as always and found that a brightness setting of 60% (three steps down from maximum brightness) gave us the desired result. 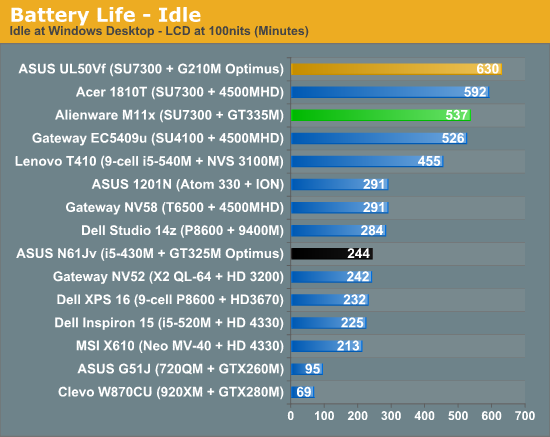 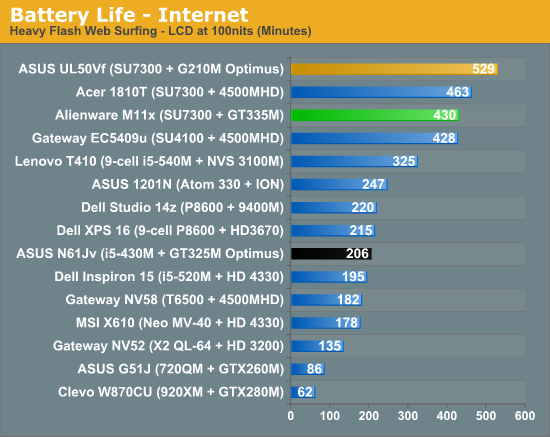 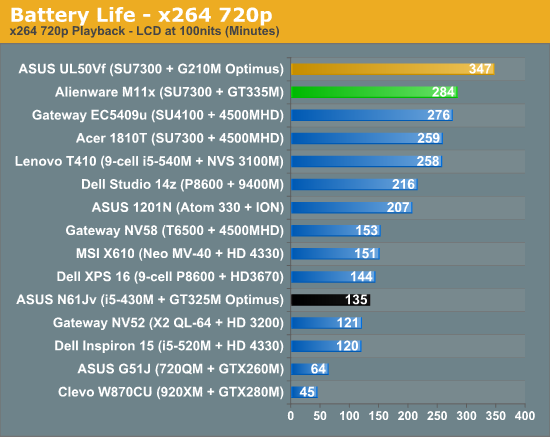 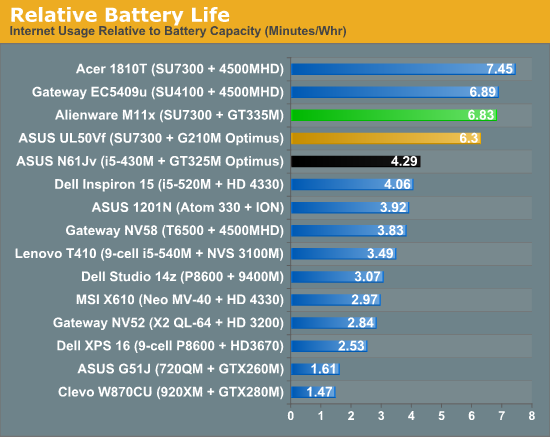 The best-case results will give you typical CULV run times: over 4.5 hours of x264 playback, 7+ hours of Internet surfing, or just shy of 9 hours of idle battery life. If you don't like fussing with the BIOS, we suggest you run the M11x at the overclocked setting all the time; you still get over four hours of x264 video playback, 6.5 hours of web surfing, and 7 hours of idle battery life. Try that with any other "gaming" laptop and you'll likely end up disappointed. Relative battery life puts the M11x just slightly behind other 11.6" CULV laptops (Acer 1810T and Dell 11z) and on par with the Gateway EC54. Again, we really like switchable graphics and Optimus, as it allows users to get the best of both worlds… except Optimus appears to be the way of the future since you get better driver support (at least that's what NVIDIA is saying right now—we'll confirm when we see the next public Verde driver).

Of course, if you want to play games without plugging in—which means using the GT335M, naturally—you're going to get significantly less battery life. We conducted a gaming battery life test as well, with the CPU overclocked. The M11x managed just over two hours (126 minutes) before shutting down, though it did provide the same great gaming performance in the interim. If you need to play games for 90 minutes or less on your daily commute, and you don't mind the strange looks on the faces of your fellow passengers, the M11x will provide a nice outlet. However, it works better for gaming if you have ready access to an AC outlet, in which case the battery is just a safeguard against losing your progress with the power goes out.