pro·gres·sive - 1 a: of, relating to, or characterized by progress b: making use of or interested in new ideas, findings, or opportunities... The introduction of the first uATX P55 based motherboard by Gigabyte indicates progressive thinking on their part. I have to admit it, I am a big fan of the uATX form factor. So my enthusiasm about this particular product has me acting like a kid on Christmas morning. We did not know if Gigabyte would proceed forward with this design or not. However, we are excited they did and can now show what was displayed to us at Computex 2009.

I was excited to see the X58 uATX form factor boards launch earlier this year and now that we have the EVGA board in-house for testing, expect to see a X58 mini-roundup in the near future. That said, I really think the P55/Lynnfield setup is a better choice for the uATX form factor than the X58/ICH10R/i7 combination due to the single chip design, lower power consumption numbers, cost, and of course performance that is almost on par if not better at times than its big brother. We cannot discuss the actual performance of the GA-P55M-UD4, but it will ship with a BIOS that is performance oriented. Based on the components utilized and board design, expect it to perform like its ATX siblings.

So let's take a quick look around the board and as always, Gigabyte welcomes your comments. 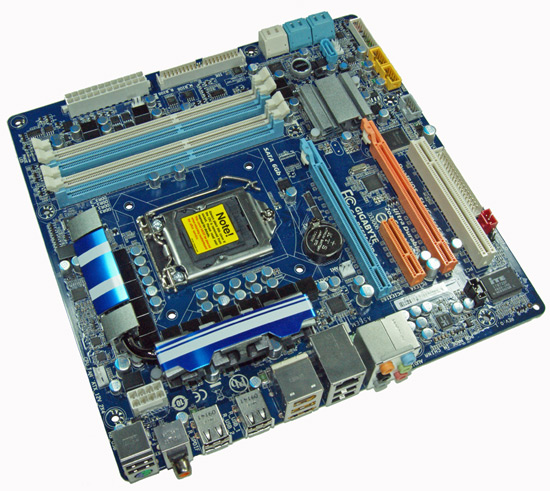 Considering the limited board space, Gigabyte did a very good job fitting all of the peripherals onto this board. About the only negatives we can think of is the continued inclusion of the floppy drive port. We think that space is better utilized for the power, reset, and clear CMOS buttons currently located in front of the SATA ports. Also, swapping the PCI and PCIe x4 slots works better for us due to our peripheral needs. The GA-P55M-UD4 fully supports both CrossFire and SLI operation. The board also sports four fan headers and the ICS 9LPRS914EKLF PLL clock generator. 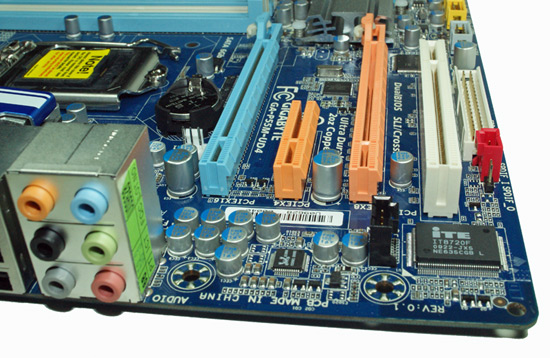 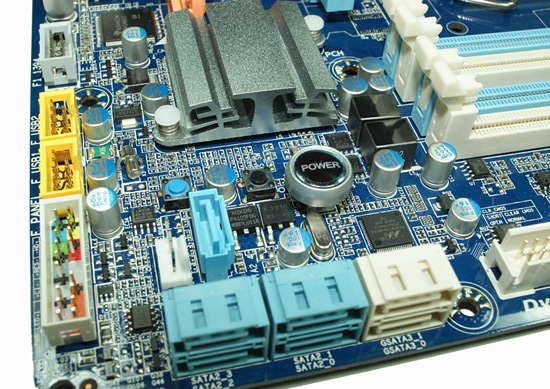 There are five (blue) SATA 3Gb/s ports provided by the P55 chipset that support RAID 0, 1, 5, 10. The sixth port available on the P55 (under the silver heatsink) is utilized on the I/O panel for eSATA. On our particular sample, Gigabyte included the Marvell 88SE9123 6Gb/s SATA chip that drives the two white SATA ports and provides IDE support. Whether or not this chipset will be utilized at launch is up in the air depending on when the respin of the chipset is completed or if a single chip implementation on boards like this will be fine based on current test results.

Also located in this area is the power, reset, and clear CMOS switches. We would have preferred that the floppy drive port be dropped and the switches moved to that location. When installing a secondary graphics card with a dual slot cooler, these buttons are difficult to use. The control panel header, two USB 2.0 (four ports total) headers, and the IEEE 1394a header are located on the edge of the board. 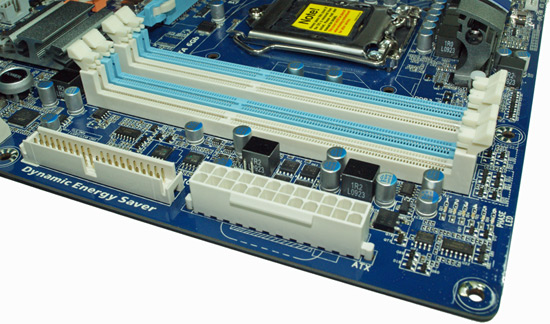 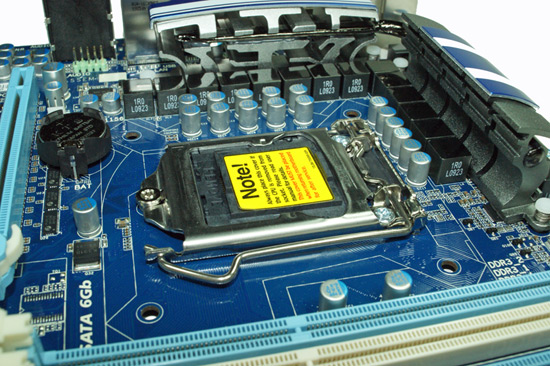 The CPU area is open for the most part and will accommodate larger coolers like the Thermalright Ultra 120 Extreme. The various capacitors and battery are located near the S1156 socket and will pose some problems for the more extreme clockers if they decide to use this board.

Last but not least is the I/O panel. We have eight USB 2.0 ports (total of twelve on the board), combination PS/2 port, self powered eSATA port, IEEE 1394a port offered by the TI TSB43AB23 chipset, Gigabit Ethernet LAN port via the Realtek RTL8111D chipset, optical out/coaxial out S/PDIF ports, and the audio panel that provides 8-channel audio output via the Realtek ALC 889a HD codec.