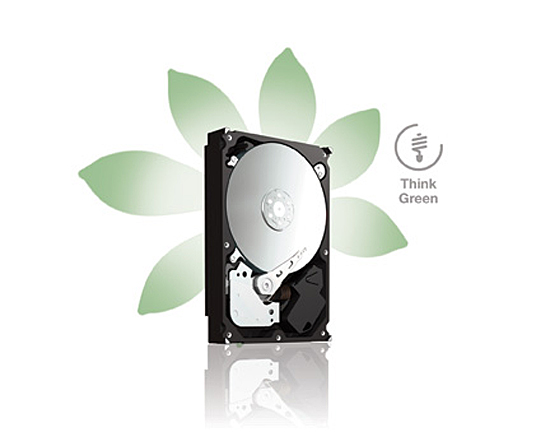 In celebration of Earth Day we have an announcement from Seagate about their new Barracuda LP lineup. The marketing checklist is very similar to the Western Digital Caviar Green series: reduced spindle speeds, low noise, even lower power consumption, and performance that is more than acceptable for the entry level, home office, SOHO NAS, or HTPC audiences.

The Barracuda LP is launching today (product availability later this week) in 1TB, 1.5TB, and 2TB capacities. The drives feature a 500GB per-platter design, 32MB buffer, and a 5,900RPM spindle speed. WD has never officially stated the Caviar Green's actual spindle speeds, but we think they are somewhere between 5,400RPM to 5,700RPM based on performance metrics. According to Seagate's press presentation earlier this week, the LP drives are fast enough to outperform their Caviar Green counterparts while offering improved power and noise levels.

Since this drive lineup will end up in external storage devices, Seagate has designed it with a rugged operating environment in mind. The drive's shock tolerance is rated to 70Gs under operation and 300Gs in power off mode.

Seagate's new Barracuda LP series looks to set a new bar in the low-power / low-noise high capacity market but you will pay for it at the upper end. Seagate quoted the suggested retail prices of $118 for the Barracuda LP 1TB, $156 for 1.5TB, and $358 for the 2TB version. Current street prices for the 1TB Caviar Green range around $100, $160 for the 1.5TB drive, and 2TB of eco-friendly storage will cost you $299.99.