Singing the Praises of the Nikon D300

It has been a very busy winter and spring, with new camera models from just about every serious DSLR vendor and every wannabe vendor in the photo universe. One of the very nice things about reviewing camera equipment is you eventually get to try them all out, and in the process you sometimes end up finding a winner or two.

This time around there was a really unexpected surprise. Sometimes one camera or another stands out, or one lens strikes us a particularly great solution. This time one DSLR blew the socks off everything else in the DSLR universe.

A little drum roll please as our prejudices get aired with more truth than we normally care to share! The Olympus E3 is a truly remarkable camera and one that completely surprised us at AT. We were fully prepared to hate another iteration of the 4/3 sensor, but the E3 was far better than we had any right to expect. We did not see how Olympus could solve the terrible viewfinder problem or the archaic 3-point AF, but they solved them both in spades. It is true that Oly had to go to 110% magnification to get a great viewfinder, and they went to an 11-point double cross-sensor AF (that’s 44 discrete AF points for those that are counting), but they did it and the E3 is a simply terrific camera. 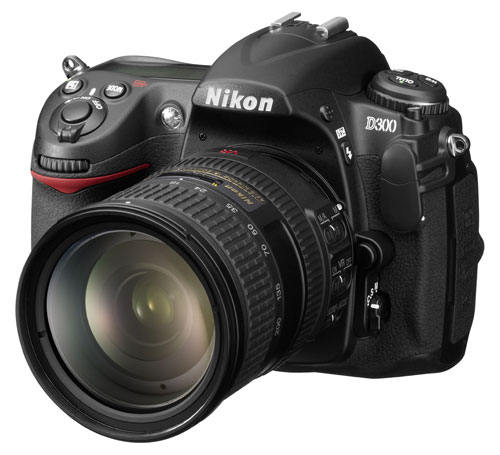 Because the Olympus E3 is so good we read the Camera-of-the-Year issue of Popular Photography and decided it was probably typical Canikon bias that PopPhoto named the D300 “Camera of the Year” when the E3 was clearly the deserving recipient. Or it was an honor that was bought like automobile “Car of the Year” awards.

That conclusion was so certain that it took quite a few months for us to actually pay serious attention to the D300. Eventually that D300/D3 bi-umvirate could no longer be ignored. It is not without egg on our face that we report that we were absolutely blown away by the D300. 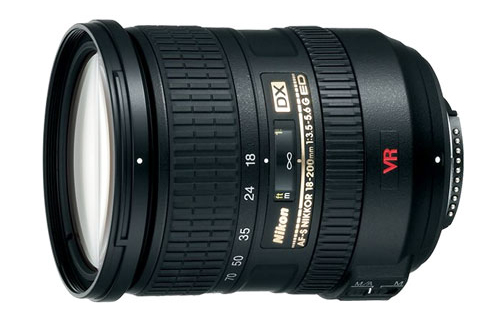 We tested it with the 18-200 AF-S (Silent Wave Motor) VR (Vibration Reduction – Nikon’s Optical Image Stabilization) lens and we finally understood why Nikon fans have waited in queues for this lens and this camera. Frankly the 18-200mm isn’t the best Nikon lens – far from it – but the combination of that incredible range in a single compact lens with Optical image Stabilization is incredible.  The D300 is the first DSLR we have tested that almost forces you to take better pictures, and the 18-200 VR lens on the D300 is a combo that almost will never miss a photo opportunity. 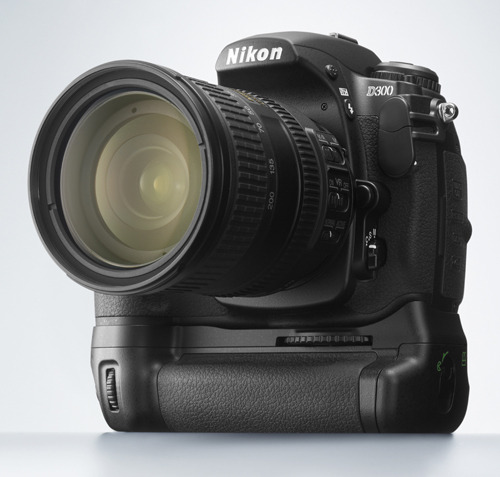 The D300 also features a completely reworked grip – one that leaves the battery in the camera like the Pentax K20D/K10D grip. The new MB-D10 is also fairly compact, unlike the Sony A700 grip, and incredibly lightweight for a Nikon grip with just one added EN-EL3e battery. The MB-D10 boosts the already remarkable 6 frames per second of the D300 body to 8 frames per second with the grip.  This compares to no speed boost at all with the Olympus or Sony or Pentax grips on their prosumer models.

We’ve always liked the high-end Nikon menus and the flash system that makes Canon flash look like a work in progress, but the lack-luster D60 had soured us toward Nikon this year. The D60 is much wanting compared to the Canon XSi which runs circles around Nikon’s entry model. In fairness the XSi costs a good deal more than a D60, but even the XTi which sells for the same or less than the D60 is superior.

However, moving to the top the D300 similarly makes the 40D look like a feeble effort at competition. We wondered what Nikon might do with their sensor supplier – Sony – now a competitor - and the answer is that Nikon does absolutely everything better with the same base sensor.

It still bugs me to mount Nikon lenses. It’s certainly familiar and a non-issue for the many Nikon shooters, but for others Nikon turns the opposite direction of every other camera maker. Nikon’s tiny and archaic looking lens mount also appears almost laughable today, thought the retained compatibility is certainly a partial raison d’être. In comparison the Canon, Olympus and even Sigma all-electronic mounts look like engineering masterpieces that are all grown up. But one run with a swift and silky smooth Silent Wave Motor lens makes you forget how goofy the lens mount looks. The motor lenses are fast, smooth, and superb in quality – and that’s what we are all looking for. 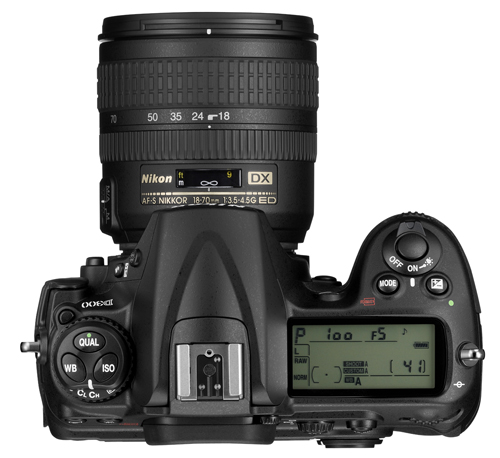 The front and rear dials also make sense – like those on the Pentax K20 – without requiring thumb gymnastics to do something useful as we often feel on the 40D. You will also find a real HDMI connector behind one of the side seals. It can even take a normal HDMI connector instead of the “mini” HDMI needed by the Sony A700 – the only other competitor to feature HD output to you HD TV or computer screen. 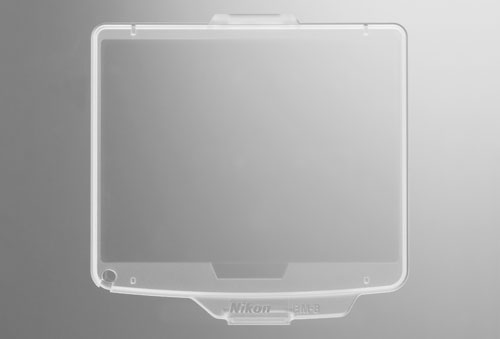 We also have to wonder why the idea of a dedicated LCD cover and protector is such a mystery to Canon and some others? Nikon seems to have figured it out, and they supply LCD covers on many of their cameras – even the mid-entry D80. 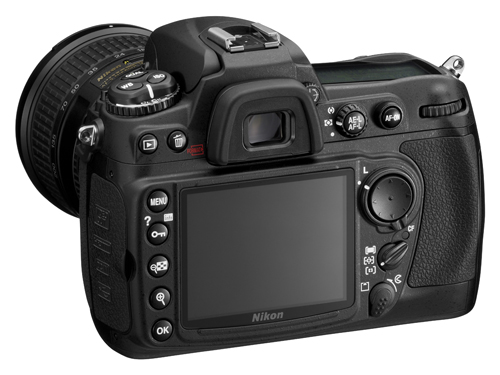 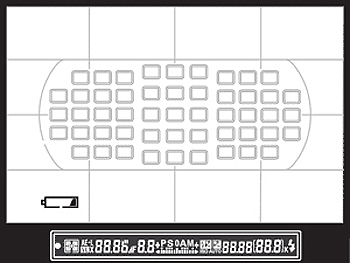 There is also that new 51-point autofocus module shared with the full-frame D3 and the best, brightest, cleanest viewfinder since Nikon starting making DSLR cameras. The 51-points work very well and they are gorgeous for those who value bragging rights – which is certainly none of our readers. However, the 51-points are a bit slower than the older 11, but even here Nikon allows the user to select a super fast 11 point AF instead where speed is the main concern as in sports shooting. 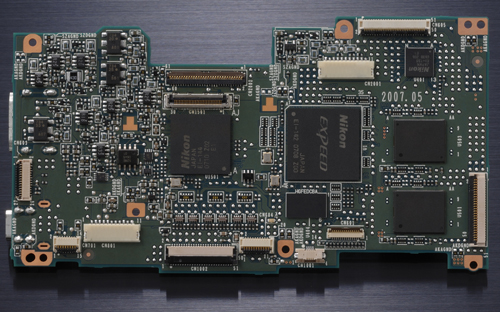 Nikon is justly famous for their in-camera image-processing. With the same CCD sensor in past cameras they routinely outperformed the sensor manufacturer’s cameras using the same sensor. In the D300/D3 Nikon has performed major upgrades to the EXSPEED chp and the associated processing support electronics. This includes selectable 12 and 14-bit processing, significantly larger and enhanced scene recognition, and upgrades to AF, buffering, write speed and metering.

Every top “prosumer” or Pro camera these days seems to pay attention to the limited contrast that is the Achilles heel of digital images, and Nikon calls their version Active D-Lighting.  What is welcomed here is the very wide range of adjustments with ADR, as this feature is called in the menus, and the fact that it works exceptionally well. 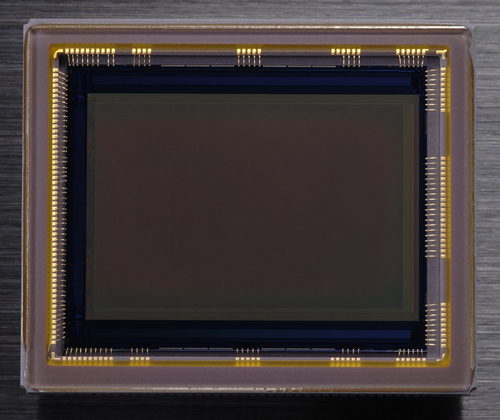 The new CMOS sensor, manufactured by Sony, appears to have a wider dynamic range to start with than competing cameras. Add an effective and tweakable ADR and dynamic range of the D300 is stand-out. With a CMOS sensor there was also an opportunity for Nikon to lower power requirements and greatly extend battery life. We haven’t measured the difference, but the new battery just seems a little like the Energizer bunny – it just keeps on working. It is a good thing the battery is long-lasting because the D300 is a camera you want to use, refining and tweaking your camera settings, as much as possible

In fact the image control capabilities of the D300 are so tweakable that the manual is 421 pages, which certainly makes it the War and Peace of camera manuals. The extensive controls are not wasted efforts, however, because unlike some competing models the D300 tweaks work, and they allow any photographer to set up their preferences for shooting and image capture the way THEY want.

Handling and the multitude of tweaks aside, the end result – the reason for being – is the image. Here, Nikon makes us all believers. Un-tweaked, Un-manipulated, un-Photoshopped, un-RAW-processed images are gorgeous on the D300. They are so good out-of-camera you have less work to do to get the greatest image since sliced bread – and isn’t that what choosing a camera is all about? When you choose to tweak you can do even better, which is the incredible potential for growth the D300 brings to the DSLR user.

So is the D300 a PRO camera or prosumer model? Nikon calls it a new PRO model and certainly when you add the MB-D10 grip the combo displaces the current Nikon Pro D2x in just about every way. That comparison makes it very fair to call the D300 a Pro model. On the other hand the D300 also obsoletes the D200 prosumer model in almost every way and it only costs a little more than the D200 it replaces.

In the final assessment you are forced to conclude the D300 is a very expensive prosumer camera AND a very reasonable PRO model. The street price for the body has been around $1800.  Every other prosumer model – the Canon 40D, Olympus E3, Sony A700, and Pentax K20D sell for a street price range of a little less (E3) to the new $1000 price of the 40D with the current Canon Instant Rebate.

We prefer to view the Nikon D300 as the biggest bargain around in a true PRO camera. There is little to want from the D3 with a D300/MB-D10 combo except a full-size sensor and ISO sensitivity to 25,600 instead of the merely spectacular ISO 6400 of the D300. They clearly share the same breakout technology and features. The D300 is also so good it is very hard to recommend buying any other more expensive crop-sensor pro model. That leaves the PRO level competition above the D300 with two full-frame sensor models from Nikon and Canon, at least until the Canon 5D MkII and Sony A900 launch later this year.

Canon or Sony or Olympus/Panasonic or Pentax/Samsung will likely shock us all in the next round of camera introductions. If they do I will be the first to applaud their accomplishments. But from where I sit right now they clearly have their work cut out for them.