The biggest selling point for the N61Jv over the competition is undoubtedly Optimus Technology. With a reasonable GPU, users get the benefit of being able to run games when they want, but they don't have to sacrifice battery life. We'll look at battery life next, but first we've got gaming results.

We used the built-in benchmarks for Batman: Arkham Asylum, Crysis: Warhead, DiRT 2, Far Cry 2, and the S.T.A.L.K.E.R.: Call of Pripyat benchmark. Empire: Total War and Mass Effect 2 used FRAPS and a repeatable segment. All of the results below are for 1366x768, since that's the native resolution on all of the laptop LCDs. We used the low/minimum (whichever was lower) setting for the default test, but we've included higher quality settings on the ASUS N61Jv. Unlike most of the other laptops in the charts, the N61Jv has enough graphics performance to handle ~Medium settings in nearly every title, and even higher settings in some games. Also note that we've dropped older Intel and AMD IGP results from the gaming charts; the former is certainly not worth the bother in games. 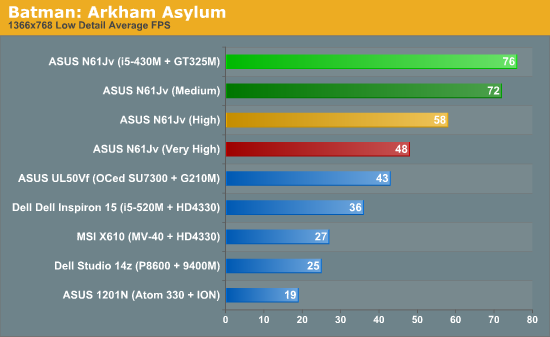 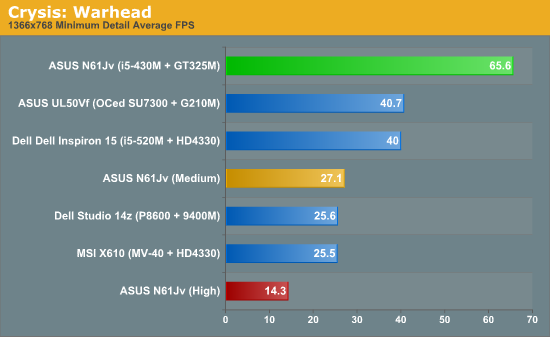 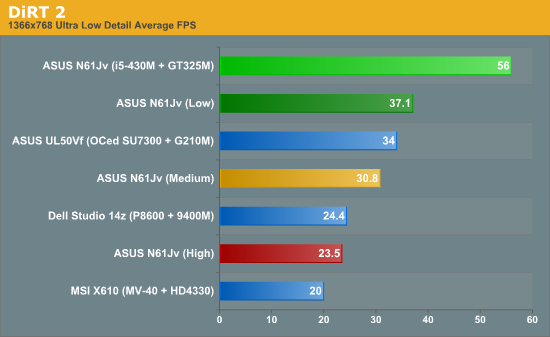 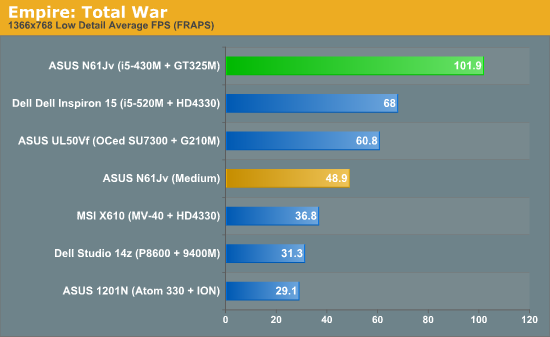 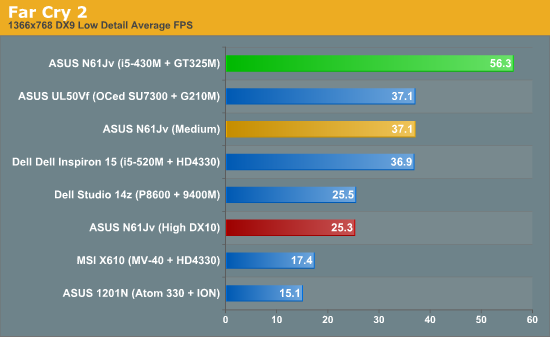 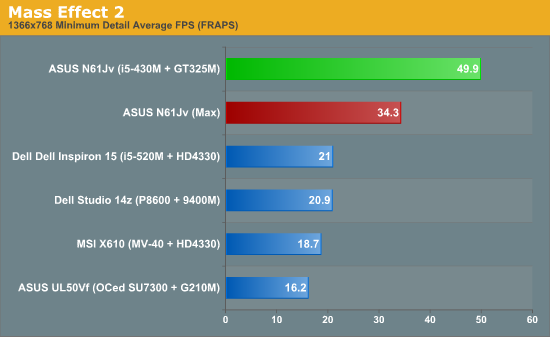 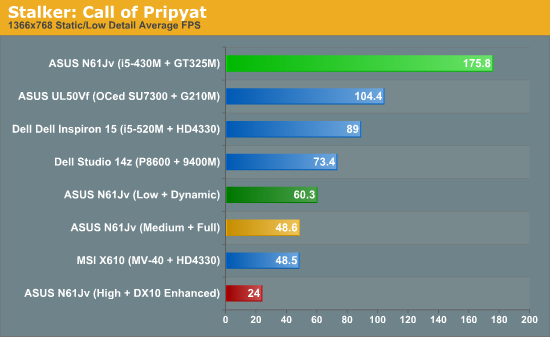 As expected, the performance advantage for the GT325M is very large compared to the other laptops in the field. The N61Jv ends up being anywhere from 50% (low detail Far Cry 2) to 250% (minimum detail Crysis: Warhead) faster than the UL50Vf. Likewise, the lead over the Inspiron 1564 (HD 4330) is 50% to over 200%. The N61Jv not only provides good gaming performance at the native 1366x768 panel resolution, but it also manages to do so with medium or higher detail settings (with the exception of Crysis: Warhead where a few settings would need to drop from "Gamer" to "Mainstream" to get performance above 30FPS). Overall, the i5-430M and GT325M is an excellent combination for an all-around computer. It won't set any speed records, but it can provide a good to excellent experience in every application we've tested.

One glitch that we did encounter with Optimus in our gaming tests is that the Steam version of Empire: Total War appears to limit our available settings based on the capabilities of the Intel HD Graphics IGP. We couldn't select the "High" or "Very High" graphics presets, and many of the individual preferences were missing the High/Very High options as well. NVIDIA is aware of the problem and we expect an updated Optimus profile will remedy the situation. As seen in the charts, however, the drop from Low to Medium is rather precipitous, and we know from experience that the High preset cuts performance by another ~third relative to Medium.

Optimus is new technology, and we expect a few hiccups with games; we also had a slight glitch with the latest Intel IGP driver, which broke Optimus support until NVIDIA and Intel were able to work together and address the problem. You'll want the updated NVIDIA Optimus driver (32-bit version here) if you plan on running with the March Intel driver. NVIDIA states that they "are working with Intel to ensure this issue does not happen again." The new NVIDIA Optimus driver includes improved merging of Optimus profiles and additional performance enhancements.

Obviously in our tests today we're comparing a more recent NVIDIA GPU against older ATI chips, and that's not entirely fair. We have an Acer 5740G laptop that we've begun testing, and we can report that it is indeed faster than the N61Jv—typically around 20% faster. The catch is that you give up not just Optimus, but switchable graphics as well. What that means is that gaming performance is better but battery life is worse. Some will also wonder about the DX11 factor; after all, HD 5650 provides it and nothing from NVIDIA can match it for now. That's true, but again we have to go back to Optimus. It's the clearly superior solution if battery life matters at all, and even though DX11 is the latest and greatest, the fact is most titles that feature DX11 support will run quite slow on the HD 5650. Just to throw out a couple examples, STALKER: Call of Pripyat with medium detail and DX11 + Tessellation yields a 1366x768 result of 33.7 FPS—playable, but not at all high performance. DiRT 2 performance drops to just over 20 FPS at high details with DX11 features enabled, making it even less palatable. We'll provide full details in our upcoming review of the Acer notebook, but the decision still comes down to performance vs. battery life.

What we'd really like—and what we're unlikely to see for a while yet—is Optimus Technology paired with a DX11 capable GPU. Alternately, getting an AMD equivalent of Optimus would be acceptable as well. Sadly, both options are more than likely several months away at best, and there are rumblings that NVIDIA may not have any mobile DX11 parts until the next cycle. When DX10 parts first arrived, we were in a similar situation for over a year, and we could very well experience a relapse with the NVIDIA DX11 rollout. Given the choice between DX10 + Optimus and DX11 without Optimus, for a midrange laptop we'd rather have Optimus. Like DX9 and DX10 before it, we expect DX11 to remain a high-end feature in games for a while. When DX11 games run acceptably on midrange mobile GPUs, NVIDIA and AMD will both be using something other than their current parts.