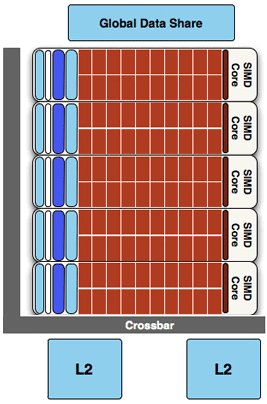 AMD has done 3 things to differentiate the 5570 from the 5670. The first of which is to significantly castrate the 5670’s memory bandwidth. While the 5670 had 1GHz (4GHz effective) GDD5, the 5570 drops that for simple 900MHz (1.8GHz effective) DDR3, giving the card only 45% of the memory bandwidth of the 5670. The second change is more customary, and that is lowering the core clock from 775MHz to 650MHz, leaving the card with roughly 83% of the computational/rendering/texturing performance of the 5670. None of the SIMDs have been disabled however, so this is a fully functional Redwood GPU. 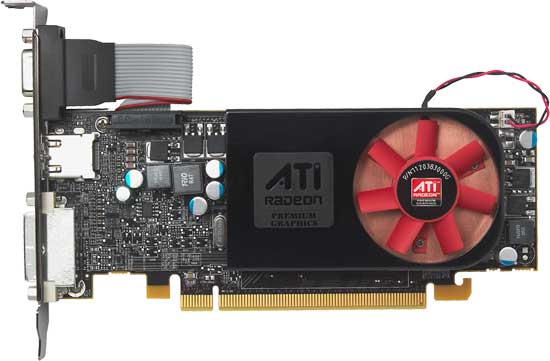 Between the drop in the core clock and the movement to DDR3, AMD has lopped off nearly 30W from the 5670’s load power usage, bringing the 5570 in at 42.7W. Idle power also drops by nearly 33%, for 9.7W. This low power usage is a big part of why AMD can get away with the 5570 being a low-profile card, as they only need a small single-slot blower to cool the card. The reference cooler (not that we expect many – if any – vendors to use it) is a blower design built upon a copper heatsink, with a small fan blowing air towards the front of the card. 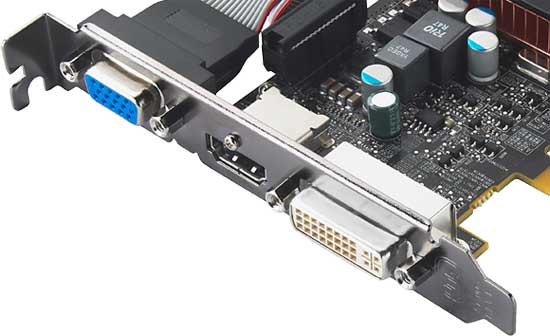 The port configuration is the same as the 5450: 1 VGA, 1 DVI, and 1 smaller digital port. Our sample came with a HDMI port, with vendors free to use an HDMI port or a DisplayPort depending on whether they want Eyefinity support as enabled by using a DisplayPort. As has been the case with all of AMD’s sub-$100 5000 series cards, Eyefinity is still cost-prohibitive at this time due to a lack of cheap active DisplayPort adaptors and monitors offering DisplayPort inputs.

AMD considers NVIDIA’s GT 220 the chief competition for this card. The GT 220 isn’t an official low-profile card, but there are a few models out there in that form factor. In terms of overall pricing, a number of GDDR5 GT 240s can be found at or right below $85, making the GT 240 the closest competitor for this card.