Although it feels like ages ago, NVIDIA announced the Fermi architecture back in September of 2009, focusing on the compute abilities of the GPU that would be GF100. Today’s announcement is about filling in the blanks – where does the graphics hardware fit in to the design that NVIDIA revealed earlier.

As a quick refresher, the GF100 is composed of 512 SPs, which NVIDIA now calls CUDA cores. Each CUDA core is organized in to a block of 32 cores which we call a Streaming Multiprocessor (SM), which in turn are laid out so that 4 of them are in a Graphics Processing Cluster (GPC). Finally, there are 4 GPCs in a single GF100 chip. 32x4x4 = 512 CUDA cores.

When NVIDIA first unveiled GF100, we did not know anything about the ROPs, texture units, or any of the fixed-function graphics units that are customary in a GPU. Today we now have that information, and can discuss where it goes.

While GF100 resembles GT200 in a number of ways as a compute GPU, as a gaming GPU it’s very close to being a complete departure from GT200. The big change here is that the single block of fixed-function hardware as we know it is gone. Virtually every piece of hardware has been split up and moved down a level, and can now be found as part of a GPC or as a SM. NVIDIA’s GF100 block diagram does a good job of showing this.

While the PolyMoprh Engine may sound simple in its description, don’t let it fool you. NVIDIA didn’t just move their geometry hardware to a different place, clone it 15 times, and call it a day. This was previously fixed-function hardware where a single unit sat in a pipeline and did its share of the work. By splitting up the fixed-function pipeline like this, NVIDIA in actuality created a lot of work for themselves. Why? Out of order execution.

OoO is something we usually reserve for CPUs, where high-end CPUs are built to execute instructions out of order in order to extract more performance out of them through instruction level parallelism. OoO is very hard to accomplish, because you can only execute certain instructions ahead of other ones while maintaining the correct result for your data. Execute an add instruction that relies on a previous operation before that’s done, and you have problems. GF100 isn’t a full OoO design, so we’re not going to cover OoO in-depth here, but if you’d like to know more please see this article. 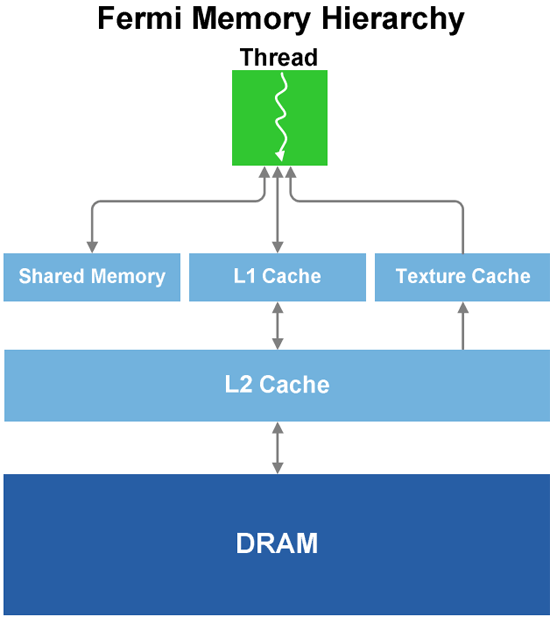 At any rate, internally each PolyMorph Engine is still a simple in-order design. NVIDIA hasn’t gone so far as to make a PolyMorph Engine an OoO design – but because there are 16 of them when there used to be just 1, OoO hazards can occur just as they would in an OoO executing CPU. NVIDIA now has to keep track of what each PolyMorph Engine is doing in respect to the other 15, and put the brakes on any of them that get too far ahead in order to maintain the integrity of results.

To resolve the hazards of OoO, GF100 has a private communication channel just for the PolyMorph Engines that allows them to stay together on a task in spite of being spread apart. The fact of the matter is that all of the work that goes in to making a design like this work correctly is an immense amount of effort, and NVIDIA’s engineers are quite proud of this effort. They have taken the monolithic design of prior GPUs’ geometry units, and made it parallel. We can’t overstate how much of an engineering challenge this is.

However all of this work came at a cost, and not just the significant engineering resources NVIDIA threw at GF100. The other cost was time – we believe that the PolyMorph Engine is the single biggest reason that GF100 didn’t make it out last year. It’s the single biggest redesign of any component in GF100, and is something that NVIDIA had to start virtually from scratch on. When NVIDIA told us that designing a big GPU is hard, this is what they had in mind.

Now why did NVIDIA put themselves through all of this? Because in their eyes, they had to. The use of a fixed-function pipeline in their eyes was a poor choice given the geometric complexity that a tessellator would create, and hence the entire pipeline needed to be rebalanced. By moving to the parallel design of the PolyMorph Engine, NVIDIA’s geometry hardware is no longer bound by any limits of the pipelined fixed-function design (such as bottlenecks in one stage of the pipeline), and for better or for worse, they can scale their geometry and raster abilities with the size of the chip. A smaller GF100 derivative will not have as many PolyMorph or Raster units as GF100, and as a result won’t have the same level of performance; G92 derivatives and AMD’s designs both maintain the same fixed function pipeline through all chips, always offering the same level of performance.

Speaking of performance, we’ll get to that in a bit, but for now we’ll finish our discussion of GF100’s graphics units. Each SM has 4 texture units, which have changes somewhat from the GT200. In GT200, the texture units were at the TPC level; here they are per SM. The texture units are also affected by the cache reorganization of GF100; for L1 cache they still have the same 12KB of texture cache per set of 4 texture units, while they all share GF100’s 768KB L2 cache, which is now used by all execution units and not just textures. Each unit can compute 1 texture address and fetch 4 texture samples per clock, a significantly higher texture fetch rate than on the GT200. Furthermore in conjunction with DX11, NVIDIA’s texture units now support DX11’s new compressed texture formats. Finally, texture units are now tied to the shader clock and not the core clock. They run at 1/2 the shader clock speed of GF100.

That leaves us on a final note: clocks. The core clock has been virtually done away with on GF100, as almost every unit now operates at or on a fraction of the shader clock. Only the ROPs and L2 cache operate on a different clock, which is best described as what’s left of the core clock. The shader clock now drives the majority of the chip, including the shaders, the texture units, and the new PolyMorph and Raster Engines. Specifically, the texture units, PolyMorph Engine, and Raster Engine all run at 1/2 shader clock (which NVIDIA is tentatively calling the "GPC Clock"), while the L1 cache and the shaders themselves run at the full shader clock. Don’t be surprised if GF100 overclocking is different from GT200 overclocking as a result.