Seagate Goes Light on the Details

I will admit, I was disappointed when Seagate first approached me about Pulsar. Seagate is unwilling to discuss the manufacturer of their controller, nor are they interested in talking about any of the technology behind Pulsar. The only details we’re getting today are a handful of performance numbers, supported features, and commitment that Pulsar is shipping to OEMs.

First let’s tackle the controller question. I asked Seagate who made the controller in Pulsar and the best answer I got was that the drive uses a combination of Seagate and 3rd party IP. Translation? Someone else makes the chip, but perhaps Seagate has input into the firmware design.

Given the decades of experience Seagate has in making HDD firmware, I’m certain that some of that knowledge lends itself well to dealing with the intricacies of developing optimal SSD controller algorithms. Seagate is intimately familiar with the sorts of access patterns its customers are going to be using the most and I would be ashamed if Pulsar wasn’t heavily optimized for that.

The controller does support idle time garbage collection similar to what both Samsung and OCZ have introduced on their drives. TRIM is also supported and enabled on the first drives.

Seagate doesn’t have an end user upgradeable firmware, but it doesn’t really matter for its first clients since Pulsar is an OEM exclusive right now. Seagate’s official stance on the issue was if you do it right the first time you don’t need to have an upgradeable firmware. Cocky, but most likely arrogance covering up the lack of a good strategy on Seagate’s part. This is something I expect to change by the time Seagate enters the consumer market.

Future Seagate SSD offerings will be available through retail channels, but Seagate wanted to address the enterprise OEM market first with Pulsar.

Next we have the flash itself. Given the enterprise focus, Pulsar uses SLC NAND flash, putting it in a higher price, reliability and presumably performance class than the bulk of the SSDs we encounter. 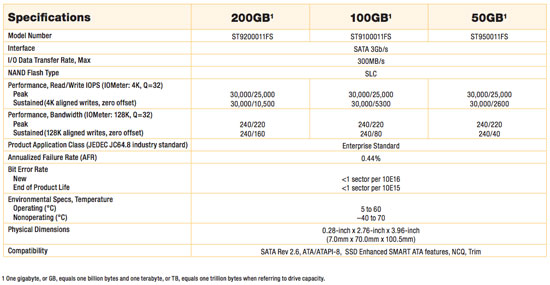 Seagate’s capacities indicate a 4 or 8-channel flash controller on the drive, compared to Intel’s 10-channel architecture (which is why Intel sticks to flash sizes that are evenly divisible by 10).
By comparison, Intel’s 64GB X25-E actually has 80GB of SLC NAND flash on the drive. Only 59.6GB is user addressable, meaning that roughly 25% of the total NAND on the X25-E is used as spare area.

The desktop 80GB X25-M has the same amount of NAND flash on the drive, but much less is dedicated as spare area. Only 6.9% of the X25-M is used for spare area.

Consumer drives like the X25-M use much less spare area

There’s a direct relationship between spare area, write amplification and performance as I’ve described before. The more spare area you have, the higher your performance will be, provided you have a controller that’s smart enough to use it. The more random your workload, the more you stand to benefit from a large amount of spare area. Highly random server workloads make good use of larger spare areas and thus most enterprise SSDs allocate more NAND to spare area.

Seagate threw a jab at Intel saying that the X25’s 20GB per day for 5 years lifespan rating wasn’t useful to the end user. Instead, Seagate is classifying the Pulsar SSD as having a 5 year useful lifespan. I’ll clarify what that means in a moment.

The performance specs of the drives are below:

Seagate claims that the random read/write IOPS figures are on a conditioned drive, however Seagate wouldn’t tell me how the drive was conditioned. Seagate also provides two values for each score: peak and sustained. Peak, if in a conditioned state, most likely means the highest attainable value after a short period of activity. Sustained, according to Seagate, is the absolute minimum level of performance you should expect. Both are difficult to validate without a better understanding of Seagate’s methodology, which the company was unwilling to reveal to me.

The 50GB Pulsar (effectively a 64GB drive) is good for up to 2600 4KB random write IOPS (queue depth of 32) over the entire user addressable LBA range. Intel specs the 64GB X25-E at 3300 4KB random write IOPS. Peak performance is listed at 25,000, but it’s unclear how Seagate arrived at that number. I’m guessing it refers to a clean secure erased state, in which case that’s also under what I would expect from the X25-E. 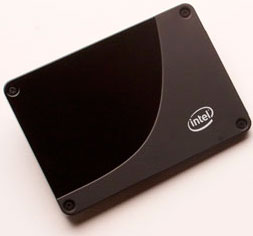 Things change completely once we get to larger capacities. The 100GB drive pulls ahead at 5300 IOPS, while the 200GB drive can deliver 10,500 IOPS. Both of these values, if they are indeed derived after continuous testing on a preconditioned drive, are higher than Intel’s X25-E. Without a drive from Seagate there’s no way to confirm, but the performance data looks promising.

Intel has avoided delivering anything larger than the 64GB X25-E, if you need capacity, Pulsar can deliver it. Even if you don’t need capacity, you could theoretically dedicate even more flash to spare area and have an even faster SSD.

Sequential read/write speed is as you’d expect. 240MB/s for sequential reads and, used, 40 - 160MB/s depending on the drive capacity. The 50GB drive’s 40MB/s sequential write speed is disappointing, but the larger sizes are palatable. Such low write speeds are either artificial or the result of the same sort of issue that continues to plague Intel’s X25-M. It’s also a way of getting you to buy the larger (read: more expensive) drives.