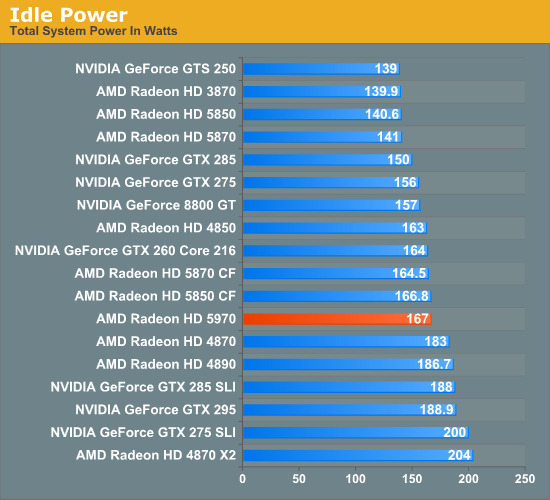 Thanks to AMD’s aggressive power optimizations, the idle power of the 5970 is rated for 42W. In practice this puts it within spitting distance of the 5800 series in Crossfire, and below a number of other cards including the GTX 295, 4870X2, and even the 4870 itself. 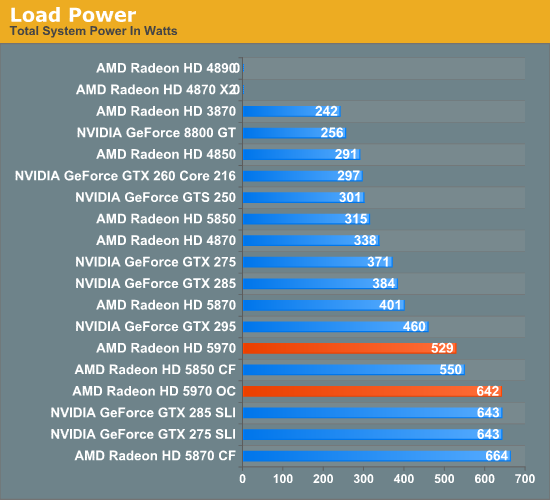 Once we start looking at load power, we find our interesting story. Remember that the 5970 is specifically built and binned in order to meet the 300W cap. As a result it offers 5850CF performance, but at 21W lower power usage, and the gap only increases as you move up the chart with more powerful cards in SLI/CF mode. The converse of this is that it flirts with the cap more than our GTX 295, and as a result comes in 69W higher. But since we’re using OCCT, any driver throttling needs to be taken in to consideration.

Looking at the 5970 when it’s overclocked, it becomes readily apparently why a good power supply is necessary. For that 15% increase in core speed and 20% increase in memory speed, we pay a penalty of 113W! This puts it in league with the GTX series in SLI, and the 5870CF, except that it’s drawing all of this power over half as many plugs. We’re only going to say this one more time: if you’re going to overclock the 5970, you must have a very good power supply. 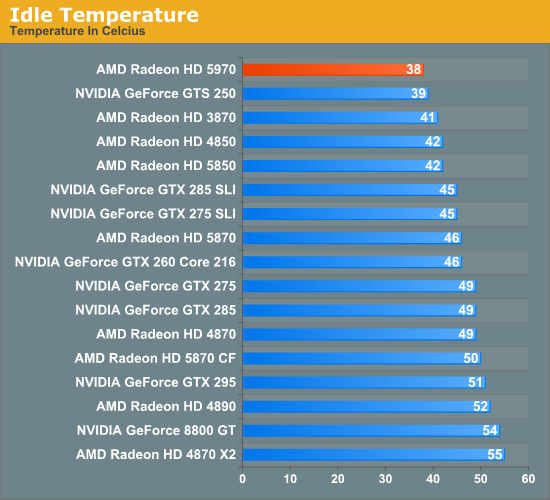 Moving on, the vapor chamber cooler makes itself felt in our temperature testing. The 5970 is the coolest high-end card we’ve tested (yes, you’ve read that right), coming in at 38C, below even the GTS 250. This is in stark opposition to previous dual-GPU cards, which have inhabited the top of the chart. Even the 5850 isn’t quite as cool as a 5970 at idle. 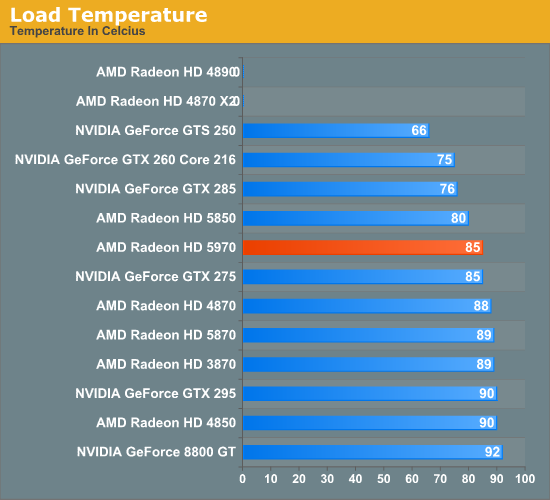 At load, we see a similar but slightly different story. It’s no longer the coolest card, losing out to the likes of the 5850 and GTX 285, but at 85C it hangs with the GTX 275, and below other single and dual-GPU cards such as the 5870 and GTX 295. This is a combination of the vapor cooler, and the fact that AMD slapped an oversized cooler on this card for overclocking purposes. Although Anand’s card failed at OCCT when overclocked, my own card hit 93C here, so assume that this cool advantage erodes under overclocking. 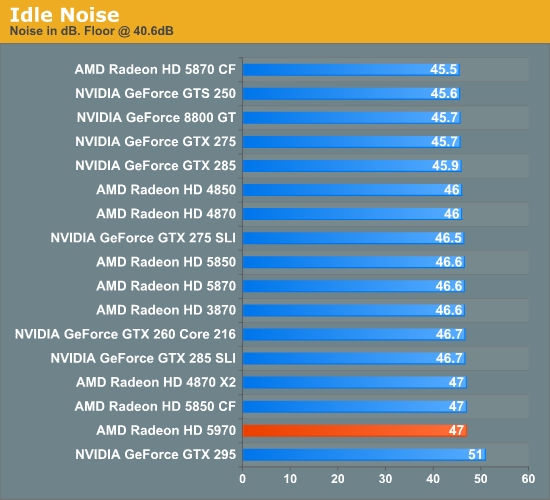 Finally we have our look at noise. Realistically, every card runs up against the noise floor, and the 5970 is no different. At 38C idle, it can keep its fan at very low speeds. 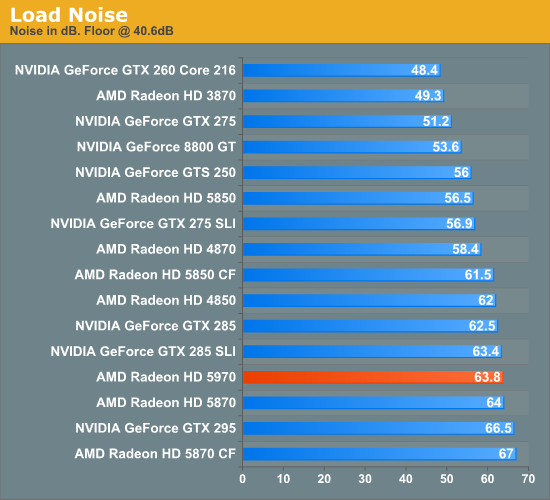 It’s at load that we find another interesting story. At 63.8dB it’s plenty loud, but it’s still quieter than either the GTX 295 or 5870CF, the former of which it is significantly faster than. Given the power numbers we saw earlier, we had been expecting something that registered as louder, so this was a pleasant surprise.

We will add that on a subjective basis, AMD seems to have done something to keep the whine down. The GTX 295 (and 4870X2) aren’t just loud, but they have a slight whine to them – the 5970 does not. This means that it’s not just a bit quieter to sound meters, but it really comes across that way to human ears too. But by the same token, I would consider the 5850CF to quieter still, more so than 2dB would imply.