We will start off our P55 coverage this week by answering a question that has been raised numerous times as of late, “Exactly how will the new DX11 cards perform on the Lynnfield/P55 platform compared to the Bloomfield/X58?”. The answer to that question depends on the game engine, settings, and processor choice for the most part. There has been much speculation that the Lynnfield/P55 platform would fail miserably with the next generation cards. That said, the difference in platform performance between the first DX11 capable cards available (ATI HD 5870/5850) is about the same as previous generation cards we tested in the Lynnfield launch article.

This means for single card performance both platforms trade blows for supremacy. However, for those running CF/SLI setups, the X58 continues to be the platform of choice for users wanting the best possible benchmark results. Does that mean the integrated dual x8 PCIe 2.0 logic on Lynnfield is a poor choice compared to the dual x16 PCIe 2.0 sporting X58? Absolutely not based on our initial tests. In fact, it should satisfy most users.

Now for those making an investment into an ultra high-end HD 5870 CrossFireX setup, the Core i7/X58 configuration will simply offer the best possible performance. Of course that performance comes at a cost, particularly power consumption. However, we have a feeling most owners sporting two HD 5870s are not that concerned about Al Gore knocking on their door in the middle of the night.

In the meantime, we have our first performance results comparing the Core i7/860 and P55 against the like priced Core i7/920 and X58 in a variety of games. We are going to state this upfront, this is not a GPU review of the HD 5870. Instead, we decided to pull this information out of the upcoming high-end P55 roundup so it did not get lost in the mix. Our resolution is limited to 1920x1080 that we use in the motherboard test suite. As such, the numbers speak for themselves. So let’s get right to the results today, but first, the test setup. 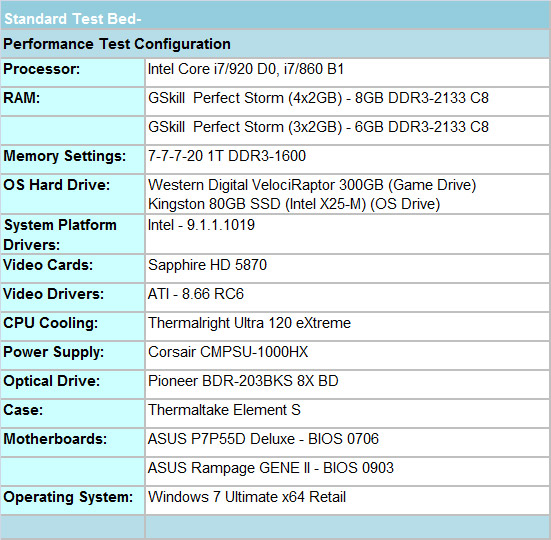 For our test results we setup each board as closely as possible in regards to memory timings and sub-timings. The P55 motherboard utilized 8GB of DDR3, while the X58 platform contained 6GB. The P55 and X58 DDR3 timings were set to 7-7-7-20 1T at DDR3-1600 for the i7/920 and i7/860 processors at both stock and overclocked CPU settings. All power management features were enabled on each board and voltages were set at the lowest possible values when overclocking while still retaining 24/7 stability.

The image gallery below contains our Everest memory results with each processor overclocked at similar memory settings along with voltage/uncore/subtiming options. The 860/P55 offers slightly better throughput and overall latency numbers than the 920/X58 when overclocked. At stock, the latency numbers favor Lynnfield with assistance from the turbo mode.

Our game selection today is varied but is missing a couple of titles we wanted to show. We pulled Crysis Warhead as the CrossFireX scaling numbers were under 8% and Need For Speed: Shift does not have a CrossFire profile yet. AMD is currently working on updated CF profiles for the latest games. We also had some corruption problems when running Empire:Total War and Anno 1404 that is under investigation.

All of our gaming performance results are reported in average frame rates per second in the main bar graph with minimum frame rates reported in the text section. The results are sorted by the average frame rates.  We are also reporting single card results with the HD 5870 running at PCIe 2.0 x8 speeds on the P55 platform to compare performance to the x16 single card setup. We installed an Intel CT Gigabit network card in the second physical x16 slot in order to force x8 operation.