Lab Update: The Next SSD Article, Matte vs. Glossy and Touch Screens

I’ve been teasing everyone on Twitter with this for a while, but I’m really nearing close on the third installment of my SSD coverage. Right now I’m extensively testing TRIM on the major drives. Indilinx is the first out with official TRIM support...at least through a beta firmware. It’s currently enabled on both OCZ and Super Talent drives. 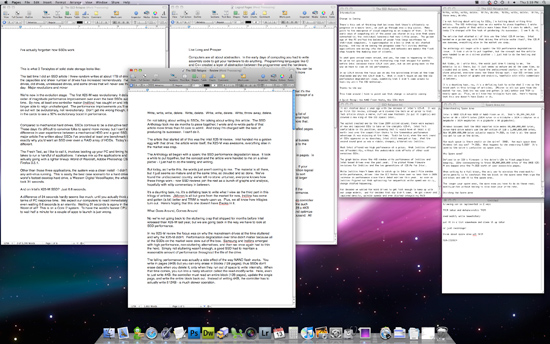 All of the text behind the next SSD article...just wait until you see the Excel sheet to go along with it

There are some limitations to TRIM. Currently the Intel Matrix Storage Manager drivers won’t pass the TRIM command through from Windows 7 to the drive’s controller. If you want TRIM to work at this point you need to use Microsoft’s drivers that come with Windows 7 (note that if you set Intel’s ICH to RAID, Windows 7 loads Intel’s MSM driver so that won’t work).

The benefit of TRIM is huge, your drive doesn’t get slower because of use, it only gets slower as you actually fill it. Intel was very careful/sneaky/shiesty to only enable TRIM on its 34nm drives. Real world performance is actually very similar between the 34nm and 50nm drives for desktop users. What makes the 34nm drive the clear buy is its support for TRIM. 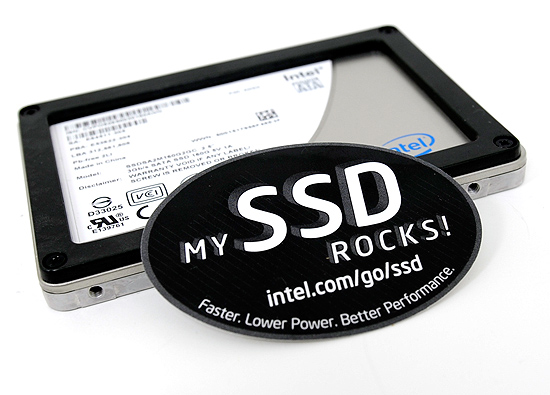 I realize I haven’t said much about the 34nm G2 drives since their announcement, but Intel decided to sample after the announcement so I’ve been busy running these things through the ringer. Intel had to embarrassingly halt shipments of the drive to fix a BIOS password bug that resulted in data loss. I was actually quite surprised that Intel even let this one slip by but they’ve since put tests in place to ensure that it never happens again.

The most impressive advancements really come from the Indilinx camp. Not only has performance improved but Indilinx is actually the first to officially support the ATA8-ACS2 TRIM command. To show you the awesomeness of TRIM I've run a quick test. Here I ran my 4KB Random Write iometer script on a brand new, secure erased Super Talent drive sporting the 1711 TRIM firmware from Indilinx. I then filled the drive (simulating use over time), deleted the partition and benchmarked it again. Note that deleting a partition doesn't seem to trigger TRIM under Windows 7. You'll see that performance drops. Next, I formatted the drive (triggering TRIM) and rebenchmarked:

Pretty sweet huh? You'd get the same results from the Indilinx Wiper Tool, but this one happens automatically. You get nearly-new performance without doing a thing. TRIM is awesome. The firmware is available from both OCZ and Super Talent but I’d avoid it until it hits final. The Indilinx Wiper Tool is more than sufficient for your TRIMing needs for now.

I’ve done some writing on a couple of things that have been on my mind lately. The first being Glossy vs. Matte displays on notebooks. It’s something I tackled last year but it’s still a worthwhile topic, especially given the attention Apple is getting. I should mention that Apple has since gone back to offering a Matte display option on its 15-inch MacBook Pros.

The other point of discussion is the future of touch screens outside of smartphones. Apple did a wonderful thing with the iPhone, but now the OEMs are struggling to figure out where touch (and multi-touch) is useful when it comes to notebooks and desktops. Help them figure it out.

Head over to WePC and check it out, leave ASUS/Intel your feedback and you may just see your opinions productized at some point :)

Between the next SSD article and Lynnfield I'll find myself with a bit of time to tackle a look at current (and one upcoming) mini-ITX Ion platforms. My question to you is: is there anything we haven't covered with regards to Ion that you'd like to see in that article?