How Much Does it Cost to Build a P55 Motherboard?

In the golden age of motherboards there were dozens of manufacturers and profit margins were nice and healthy. Manufacturers could differentiate themselves based on performance, quality and features. The CPU folks had a different plan in mind. AMD and Intel have been on the road to integration for the past two decades and the motherboard manufacturers have largely suffered because of it.

When the memory controller was in the chipset and there were 3 or 4 competitors in the chipset space, motherboards actually performed differently. These days the memory controllers are integrated onto the CPU die and performance is as high as possible. SATA, audio, ethernet and USB are all either fully integrated into chipsets or only require a small support chip on the motherboard itself. Within the next decade or so these features will move onto the CPU die as well.

My first 430VX motherboard that eventually spawned into AnandTech set me (actually my parents, I was 14) back around $130. Prices haven’t really changed, yet the expectations from end users have gone up. Granted there’s this new ultra high end market that didn’t really exist back then, but the majority of motherboards sold have far more features and don’t cost much more than what they used to.

The pressure is on the motherboard makers to deliver affordable P55 solutions. Without affordable motherboards, Lynnfield will fail - so Intel and end users are both expecting a healthy supply of ~$100 motherboards. As I’m about to show you, doing so is quite difficult. 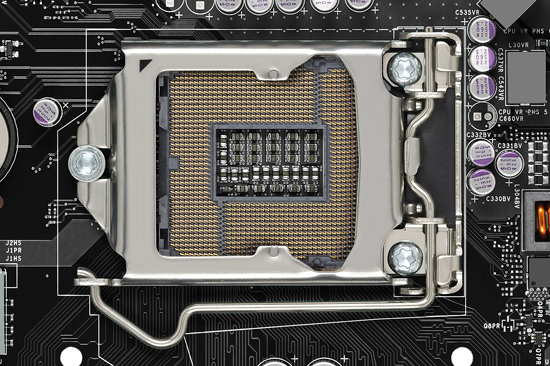 The socket itself costs a couple of dollars, but even that is significantly more than LGA-775. The motherboard makers I spoke with pegged the LGA-775 socket at well under $1 per socket. The bulk of the 1156 socket isn’t the cost of the device, but rather the licensing fee that has to be paid to Intel for each socket. I’ve heard numbers approaching $7 per socket, per board once you include the licensing fees. As volumes go up, the price per socket will go down, but for smaller manufacturers this is a tough pill to swallow. It’s far easier to build an expensive motherboard than it is to build a cheaper one.

Intel realizes this and helps the manufacturers with rebates and marketing assistance. So the license fee ultimately may be lower for some makers but getting specifics on this is impossible. Worries of lawsuits abound :) 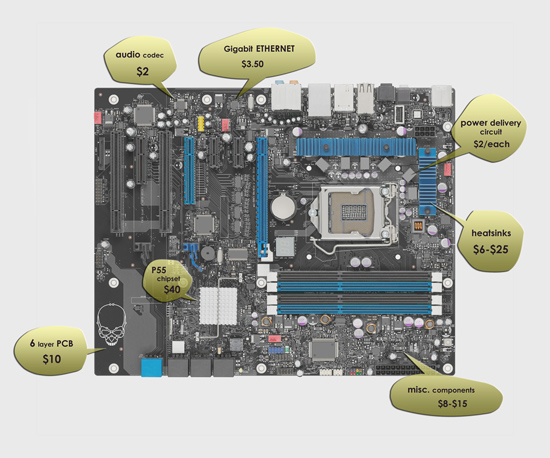 For the most part the motherboard makers look at the socket and associated licensing fees as part of the chipset cost. Despite Intel moving the north bridge and memory controller on die, Ibex Peak, otherwise known as the P55 PCH is no cheaper than P45:

If you start at $40 for the motherboard, you’ll need to add another $10 for a 6-layer PCB. A 6-layer PCB is necessary if you want to run SLI at this point, otherwise you can get by with a cheaper $5 4-layer PCB. Mentioning SLI also requires validation and support from NVIDIA. That’s $30,000 up front plus an average of $5 per motherboard.

An audio codec and Gigabit ethernet will together set you back about $5. Figure more for more expensive codecs and another $3.50 if you want dual GigE ports.

The power connectors, switches, LEDs, I/O back panel and other components on the motherboard cost anywhere between $8 and $15 depending on the type of motherboard. Figure $8 for an entry level micro-ATX board and $15 for the highest end boards with slots and ports aplenty.

What about those fancy copper heatpipes and elaborate heatsinks? They start at $6 and go as high as $25 for the really high end motherboards with high-content copper blocks and pipes.

Then there’s assembly, labor and overhead in testing and producing the motherboard. You can count on about 10% of total material cost for an entry level board, 12% for midrange and 15%+ for the high end boards. The lower the volume the higher the overhead; the more testing required, the higher the overhead as well (gotta make sure those $250 boards work right).

The final costs are related to packaging, sales and actually getting the boards to distributors. Figure about 10% per board on average.

All of this roughly adds up to a low end board costing $105 without worrying about profits. It's only through rebates or very large scale manufacturing that a motherboard maker can even come close to making a profit on an entry-level board. Mid range boards are a bit easier to make but my mid range estimates are definitely on the lower end of the spectrum. For the high end you're looking at raw costs over $200, but at those price points it's far easier to turn a profit.

While we'll definitely see P55 motherboards hit the $100 price point, it's worth realizing how difficult that is to do. As P55 matures, these costs will fall (particularly the chipset) but initially it's going to be a tough race to the bottom.