Upgrading the CPUs in the Nehalem Mac Pro

To Apple’s credit, these CPUs are expensive. Here is Intel’s pricing:

The same applies to the single-chip Mac Pro. The only CPU upgrade offered there is the Xeon W3450; retail cost is $562, Apple’s benevolent self will only charge you $500.

I should also point out the sheer ridiculousness of Apple putting a pair of $373 CPUs in a $3300 machine. I get that Apple wants to commoditize everything that they don’t make, but that’s just ridiculous.

Do you smell motivation? Because I do.

If you don’t mind voiding your warranty, you are better off buying the base Mac Pro (4 or 8 core) configuration, upgrading the CPUs yourself and ebaying the originals.

The even more sensible option would be to wait a while and upgrade the Xeons once these ones fall in price.

Regardless of when or why you want to do it, I figured we should give it a try. They built sockets for a reason after all.

Getting inside the new Mac Pro is much easier than the old one. Remove the side panel then unlatch and remove the processor tray and you’ve got this: 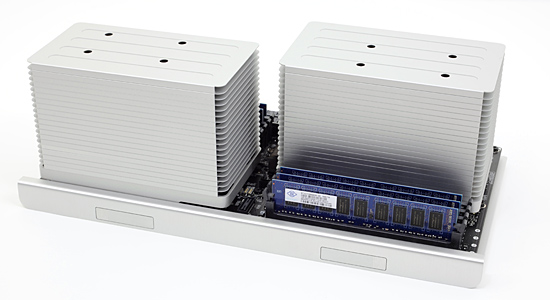 Two towering heatsinks, eight DIMM slots an X58 chipset are the main attractions. Remember all of the hoopla a few pages ago about Turbo Mode? That’s the reason for these beefy heatsinks; there’s actually a fan inside each heatsink, as well as two large fans moving air across the entire board in the case. 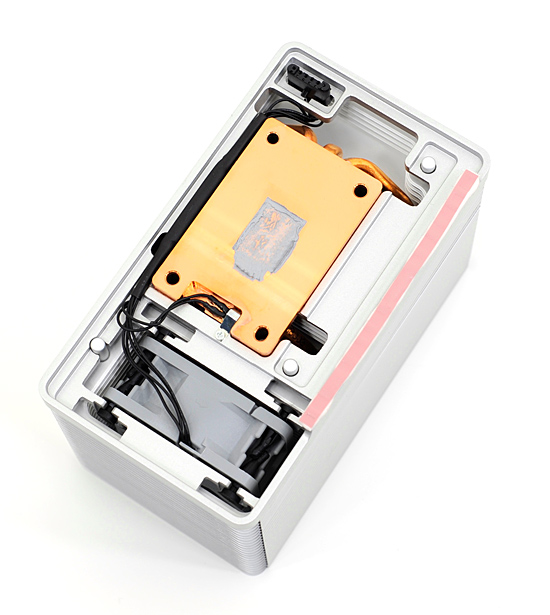 The heatsinks have an integrated fan and thermal sensor (black cable) 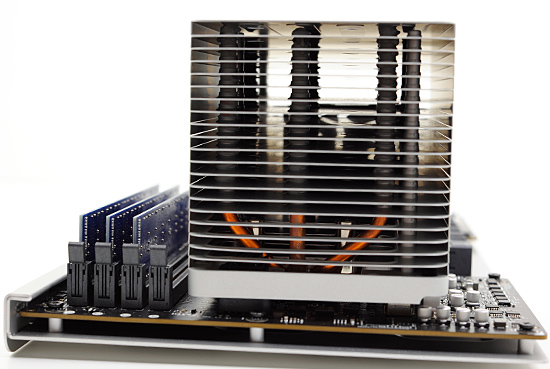 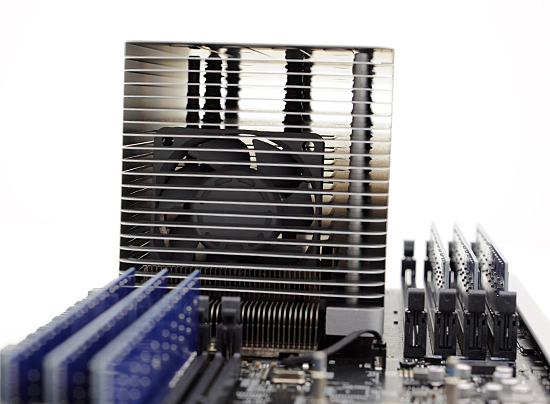 There are four screw holes at the top of the heatsink. Apple actually made removing the heatsinks very easy, all you need is a long 3mm hex key - about 3” long (plus a handle) should suffice. 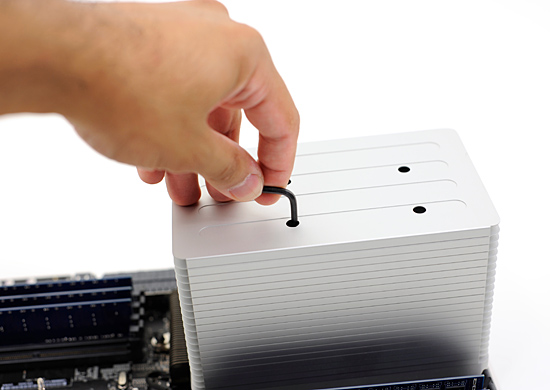 Stick the hex key in any one of the holes, move it around until it grabs, and then unscrew. Rinse and repeat. The screws are attached to the heatsink and spring loaded; you don’t have to physically remove any, just wait until they pop up.

With all four screws removed you can just lift the heatsink straight up. The CPU sockets don’t have clamps, so the chip will most likely lift out of the LGA socket attached to the heatsink.

Carefully twist and pull the CPU until it comes off of the heatsink and you’ll be greeted with the first surprise from Apple: the 8-core Mac Pro ships with lidless Nehalems.

Normally a Core i7 or Xeon processor will look like this: 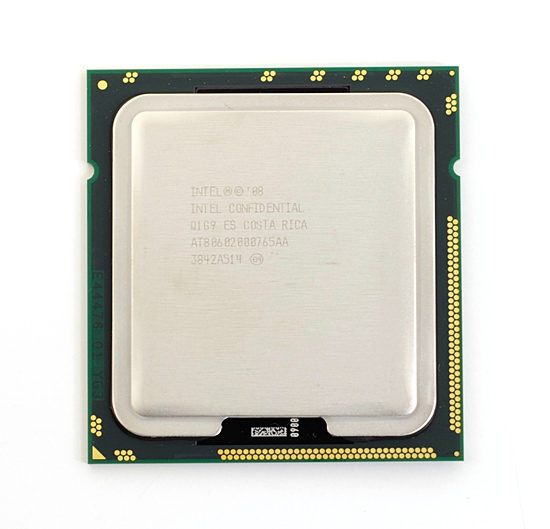 But the 8-core Mac Pro uses specially sourced parts from Intel that have no integrated heat spreader (IHS): 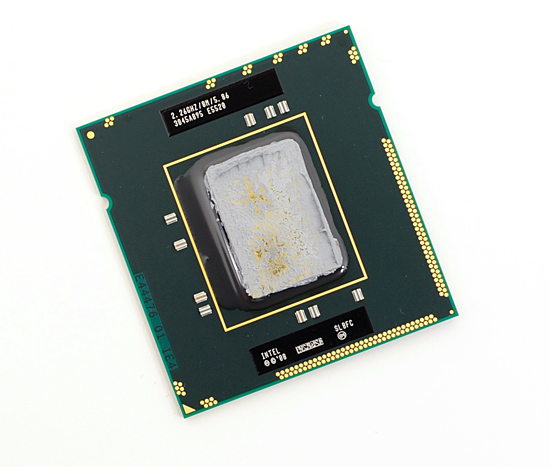 No lid, all Nehalem.

This is obviously a cooling play. The IHS is useful in preventing cracked cores from improperly installed heatsinks, but it does make cooling more difficult. With the heatsink flush against the bottom of the Nehalem die, it can remove heat faster from the chip. More efficient cooling results in lower CPU temperatures and lower fan speeds.

The lidless Nehalems are only used in the 8-core version as far as I can tell. The standard quad-core Nehalem Mac Pro uses regular Xeons with an integrated heat spreader.

The lidless Nehalems do provide a challenge: you can’t buy them. You have to buy a standard, lidded Nehalem Xeon and either remove the IHS or leave it intact and hope it works well. The first option isn’t a very good one; while removing a heat spreader isn’t impossible, you do run the risk of destroying your $1400 CPU. The second option, if it works, is the safest route. 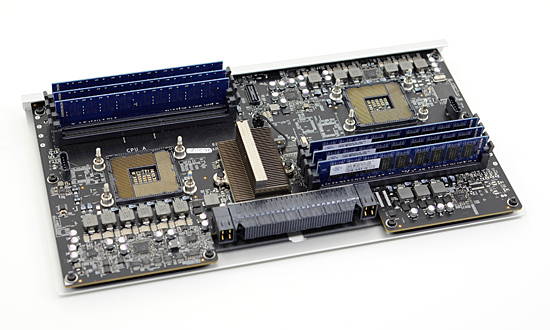 We got a pair of Xeon X5570s and tried to install them, with heat spreaders and all, in our 8-core Mac Pro. Simply pull one chip out, replace it, apply thermal grease, remount the heatsink and screw it back in...or so we thought. 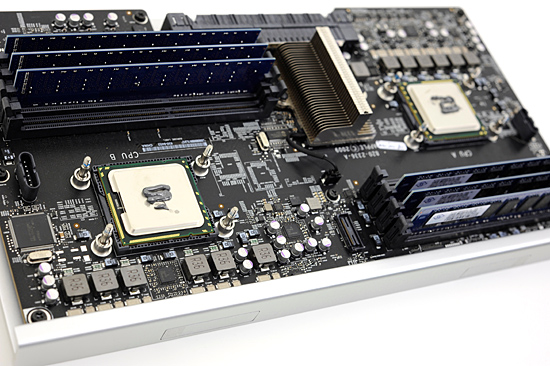 The lidless Nehalems were out, the new lidded processors should work - they should just be a bit more difficult to cool