Let me preface this with the usual disclaimer. Intel did *not* supply me with this chip and it is most definitely pre-production silicon, not necessarily indicative of final, shipping performance.

With that out of the way, here is Lynnfield: 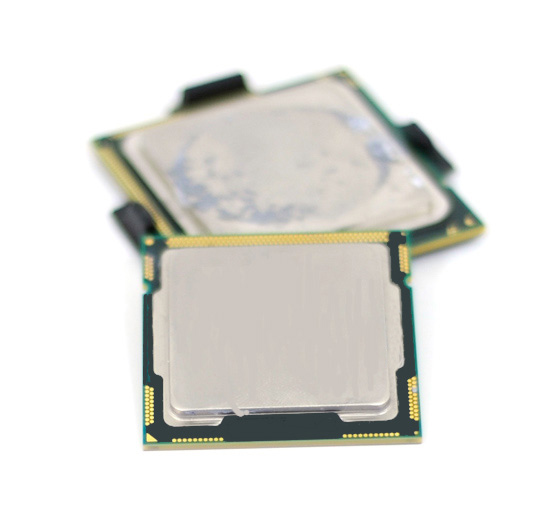 Lynnfield (front) vs. Bloomfield (back) 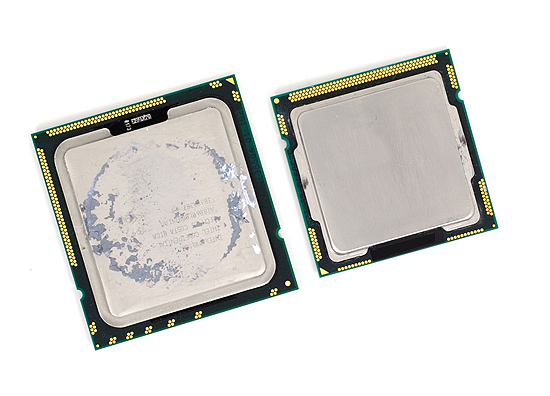 It’s a lot smaller than the LGA-1366 Core i7, but compared to current Core 2 Quads it’s actually similar in size: 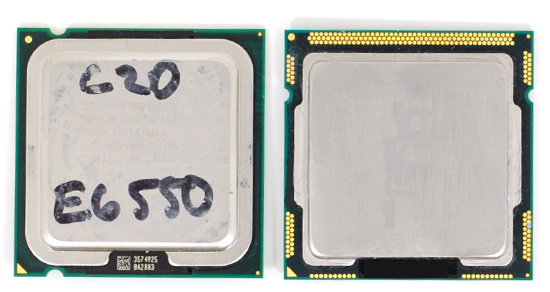 Flipping the chips over you see that Lynnfield has a much higher pad density, enabling Intel to fit 1156 pads in about the same space as it fit 775 pads just a few years prior. 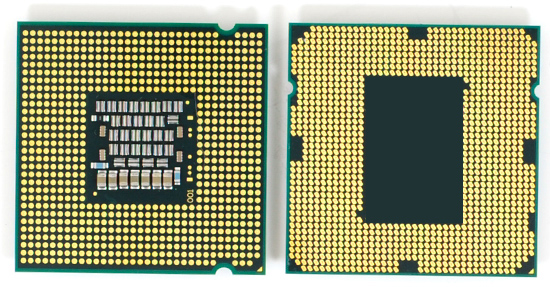 Once more, I’ve blanked out all of the caps and other markings on the chip to protect the innocent.

The initial Lynnfield samples were all clocked at 2.13GHz with HT enabled. Turbo mode was also enabled but it too was a meager 2.26GHz regardless of how many cores were active. All of this was to enable motherboard manufacturers to test compatibility and performance of their P55 without giving away Lynnfield’s true performance.

Unfortunately this is the sample I tested with. Thankfully it was healthy enough for me to overclock the BLCK to 166MHz, resulting in a 2.66GHz frequency. Turbo mode was still stuck at a 1x increase over the stock frequency, so final Lynnfield performance should be much better in single and dual threaded apps than what you’ll see here today.

If you thought Nehalem needed Hyper Threading to be a strong performer, you were dead wrong.

The current rumors in the press are that Lynnfield is being held back in order to clear out excess Core 2 Quad inventory before it ships, because once this thing ships no one is going to want a Penryn anymore. Based on what I've seen, Lynnfield isn't ready just yet - it's not an artificial delay.

The motherboards are in rough shape, CF/SLI isn't working and we're still at very early revs of the CPU's silicon. While I think that the chip will be ready far in advance of its rumored September shipdate, the CPU and motherboards aren't yet.

Once more: the CPU we've tested here is pre-production silicon without all of its turbo modes enabled. I expect final, shipping performance to be higher in some cases.