The Move to DDR3: You Can Do It

The Phenom II 955 and 945 support both DDR3 and DDR2 memory. Just a couple of months ago you could save a good amount of money by going with DDR2 over DDR3, but these days the price difference is negligible.

A good pair of 2GB DDR2-1066 sticks will set you back around $57 while a pair of 2GB DDR3-1333 modules will sell for around $60. The problem is that faster DDR3 modules usually have higher latencies associated with them. The table below shows the CAS latency of these modules in ns:

From a latency perspective, DDR2 or DDR3-1066 at CL5 is your best bet. However there is a benefit from having more bandwidth; DDR3-1333 delivers 25% more bandwidth but typical DDR3-1333 modules run at CL7 which translates into 12% higher CAS latency than CL5 at 1066. 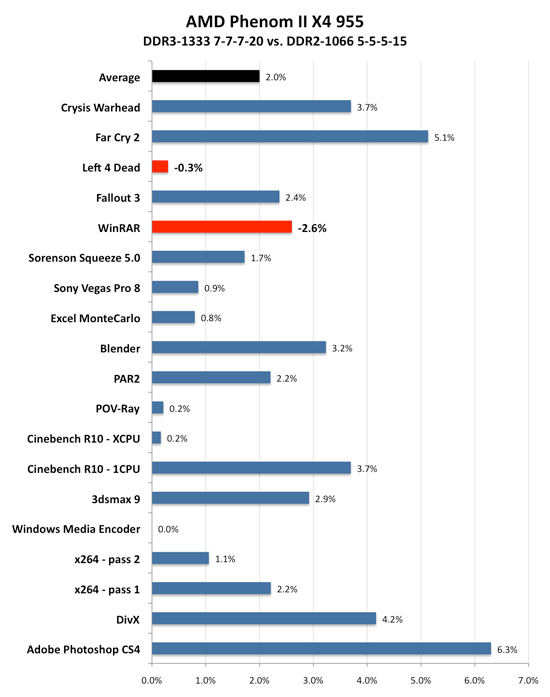 In all but two cases the improved bandwidth, but higher latency DDR3-1333 was faster - but the average performance improvement was only 2%. Some applications managed to see a 5 - 6% increase in performance but overall don’t sweat the difference.

Obviously DDR3 is going to do you more good in the long run so it’s what I’d recommend you stick to if you are building a new system. It’s lasted us a long time and we’ve enjoyed its extreme affordability, but DDR2 is finally on its way out.