The Flemish/Dutch Nieuws.be site is one of the newest web 2.0 websites, launched in 2008. It gathers news from many different sources and allows readers to personalize their view of all this news. The Nieuws.be site sits on top of a large database - more than 100GB and growing. This database consists of a few hundred separate tables, which have been carefully optimized by our lab (the Sizing Servers Lab).

Nieuws.be allowed us to test the MS SQL 2005 database for CPU benchmarking. We used a log taken between 10:00 and 11:00, when traffic is at its peak. vApus, the stress testing software developed by the Sizing Servers Lab, analyzes this log and simulates real users by performing the actions they performed on the website. In this case, we used the resulting load on the database for our test. 99% of the load on the database consists of selects, and about 5% of them are stored procedures. Network traffic is 6.5MB/s average and 14MB/s peak, so our Gigabit connection still has a lot of headroom. DQL (Disk Queue Length) is at 2 in the first round of tests, but we only report the results of the subsequent rounds where the database is in a steady state. We measured a DQL close to 0 during these tests, so there is no tangible impact from the hard disks. This test is as real world as it gets! All servers were tested in a dual CPU configuration. 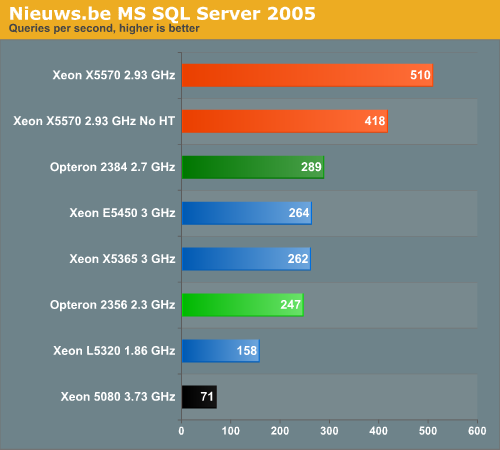 Seven times faster than a 3-year old CPU and 76% faster than an adversary that used to outperform almost every Intel CPU! Nehalem is like a CPU that used a time machine and teleported to 2009 from 2011. To put this kind of performance into perspective: it would take a 4.7GHz Opteron to keep up with Nehalem at 3.03GHz (that's the average clock speed as Turbo mode was enabled).