Fortunately for us, during motherboard testing we test SLI or CrossFireX solutions extensively. However, we do not test the graphics cards in the same manner as we do in a GPU review. During motherboard testing, we focus on ensuring compatibility, identifying any layout problems, and checking performance deltas between motherboard chipsets. Instead of running absolute GPU intensive settings, we seek a balance of playable settings that ensures decent platform performance. This means reasonable resolutions and 2xAA/8xAF settings to keep the GPU from being a limiting factor where possible. We think these quality settings are fine for most users, especially in FPS games where the differences between 2xAA, 4xAA, or 8xAA are usually minimized due to the speed of the game.

We run our benchmarks at two of the most popular resolutions for new systems, which happen to be 1680x1050 and 1920x1200, although 1920x1080 is gaining traction quickly. We mention this now as our overview of CrossFireX performance will not have 2560x1600 at 4xAA/16xAF results or tri-card setups. The population of 30” monitors is rather small and except for Crysis, tri-card performance is usually worse or at best a break even experience compared to dual card performance with our mid-range setups. Consider this review a snapshot of CrossFireX performance with one particular GPU selection as we will not be looking at other ATI cards except the HD4870 1GB.

Our test systems today are based on similar components where possible. The Intel Core 2 Quad and AMD Phenom II platforms will satisfy the requirements of most enthusiasts looking for great performance from mid-range setups. We selected a “mid-range” Core i7 setup that is capable of both SLI and CrossFire to ensure platform consistency in future articles. 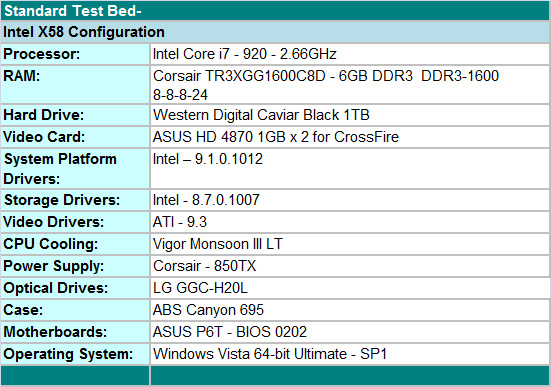 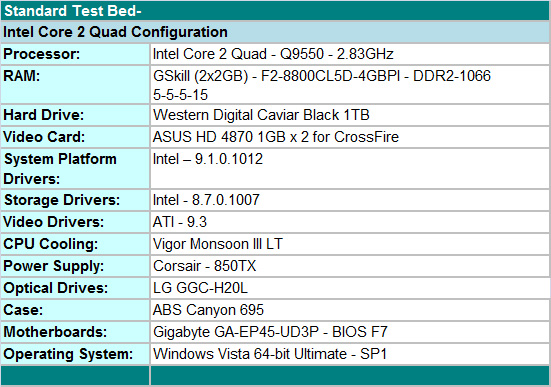 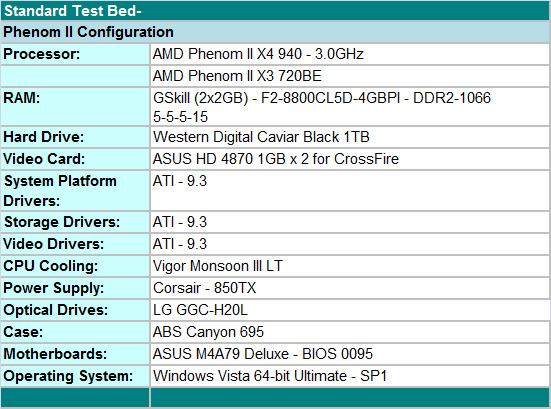 Our decision to go with a 790FX/SB750 combination on the AMD side is strictly based upon performance. The 790FX is about 3%~5% faster on average than comparable 790GX products in multi-GPU configurations. AMD continues to recommend the 790GX/SB750 as the platform of choice for the AM2+ and upcoming AM3 products. We disagree from a performance viewpoint; the 790FX/SB750 combination is simply the best choice in our opinion. Of course you will typically pay about $35~$40 or greater for the 790FX boards, but if you intend on running CrossFireX or benchmarking, we think it is worth the additional cost. We changed motherboards from our original DFI selection to the ASUS M4A79 Deluxe as we will be utilizing the M4A79T Deluxe in an upcoming DDR2/DDR3 memory comparison article.

On the Intel side, we decided to go with the P45 chipset as it offers a very balanced blend of performance and value. The Gigabyte GA-EP45-UD3P is a superb CrossFire capable motherboard that also happens to be one of the best overclocking S775 products around. The P45 offers dual PCI Express x8 operation in CrossFire mode compared to dual x16 on the 790FX, X48, and X58 boards. However, we did not notice any performance differences between dual x8 and dual x16 operation when comparing the P45 to the X48 in offline testing utilizing our resolutions and quality settings.

The i7 setup can be cost reduced easily without sacrificing any "real and perceivable" performance due to a motherboard and memory alternatives currently available in this market sector. If you are only interested in CrossFire capability on the X58, motherboard costs are now in the sub $200 range. The price of DDR3 has dropped dramatically this last month with very good DDR3-1333 6GB memory kits going for $90 or so now.

We selected the ASUS EAH4870 DK/HTDI/1GD5 video card. It is a non-reference design that offers improved thermals and acoustics over the standard HD4870 1GB cards on our board choices. We think if a user is going to run CrossFireX on one of these platforms, then the best possible performance choice is the HD4870 1GB, at least until the HD 4890 ships next week.  Depending upon pricing on the HD 4870 1GB cards or upcoming HD 4890 cards, a 4870X2 might be a better choice for users wanting CrossFireX.

Our game selections are a few of the recent top selling titles. Certain titles that are capped at 30FPS like Command and Conquer Red Alert 3 or do not benefit from CrossFireX (Flight Simulator X) were not included. We tested Grand Theft Auto IV with the latest 1.03 patch but those results are not available today.

We are also including results with our processors overclocked for CrossFire only. Overclock results with a single card configuration provided little benefit in most cases. Simply overclocking the video cards resulted in better performance numbers than overclocking the processors with this configuration. We switched from the 8.12 driver set to the 9.3 for this article. The overall numbers are extremely close between the two driver sets. The only measurable differences we noticed occurred in Crysis Warhead where the Intel platforms performed better at 1920x1200 and in CrossFire performance.

The Phenom II 940 in our previous article was overclocked to 3.95GHz (17.5x226, DDR2-1205, 5-5-5-18, NB Speed 2486Mhz), however, we discovered in later testing that performance just was not where it should have been at that CPU speed. Part of the problem was thermal related as we were bumping right up against the limits of the CPU and board on air cooling. Also our BIOS was not fully optimized for the Phenom II 940 and we continue to experience instability and performance degradation near 4GHz with Vista 64. A problem that we are still working on with AMD.

As such, we set our Phenom II X4 940 overclock to 3.8GHz (19x200, DDR2-1066 5-5-5-15, optimal sub-timings) and realized that the performance delta was minimal compared to previous results. In fact, it was so minimal that our original conclusions have not changed at all. We also clocked our Phenom II X3 720BE to the same 3.8GHz core speed with like memory settings. The only difference between the settings (includes optimal memory sub-timings) is that the Northbridge speed on the 940 defaults to 1.8GHz compared to 2GHz on the 720BE. We will look at the effects of Northbridge speeds in a separate article shortly, but our recommendation is to run it at 2.6GHz+ ASAP.

The Core 2 Quad Q9550 is set at 4.25GHz (8.5x500, DDR2-1000, 5-4-4-12), and the Core i7 920 at 4GHz (20x200, DDR3-1600, 8-8-8-24). These were the maximum stable overclocks on air-cooling that we could sustain in a 24/7 setup with Vista Ultimate 64 SP1. Our particular 940 processor will hit 4.2GHz under Vista 32 and the 720BE tops out around 4.15GHz before requiring additional cooling. We just want to reiterate one more time that we are not crippling the AMD systems on purpose. There is a definite clocking problem with the Phenom II series under Vista 64 without resorting to exotic cooling methods. Our standard test beds have all moved to Vista 64 Ultimate SP1 and will soon move to Windows 7 64 along with a very 64-bit centric application test suite. As such, it is what it is until AMD can provide a solution to this problem.