Given the nature of the SSD performance-over-time “problem” you’d expect to only pay the performance penalty when writing files, not reading. And for once, I don’t have any weird exceptions to talk about - this is generally the case.

The table below shows sequential read performance for 2MB blocks on new vs. “used” SSDs. I even included data for a couple of the hard drives in the "Used" column; for those numbers I'm simply measuring transfer rates from the slowest parts of the platter:

The best SSDs still transfer data at over 2x the rate of the VelociRaptor.

Read latency is also extremely good on these worn SSDs: 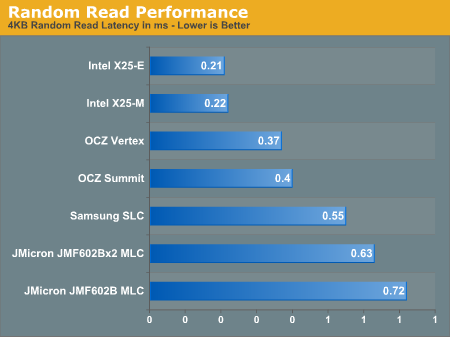 I left the conventional hard drives out of the chart simply because they completely screw up the scale. The VelociRaptor has a latency of 7.2ms in this iometer test with a queue depth of 3 IOs; that's an order of magnitude slower than the slowest SSD here.

Since you only pay the overhead penalty when you go to write to a previously-written block, the performance degradation only really occurs when you’re writing - not when you’re reading.

Now your OS is always writing to your drive, and that’s why we see a performance impact even if you’re just launching applications and opening files and such, but the penalty is much less tangible when it comes to read performance.