AMD just released a beta version of their Fusion for Gaming tool. This application is targeted at the not-so-hardcore gamer who still wants to get the most out of his or her system. The idea is that at the press of a button that sits on your desktop, you could engage a system state that is more ... let's say ... gaming friendly.

One of the major features of this software is that it automatically overclocks both the CPU and the GPU. Because of this, AMD will only allow the tool to run on all-AMD platforms, meaning that people who run AMD GPUs on Intel CPUs and AMD CPUs with NVIDIA GPUs will not be able to benefit from this applications.

Sure, the platform focus makes sense in a lot of ways. Adding some sort of value beyond the hardware to your platform is one way to try and get more people to purchase your products, especially when one of your product lines is doing well while another is not. AMD CPUs just don't compete like they used to, and with the overclockability of many Intel CPUs, AMD needs another way to sell their hardware. 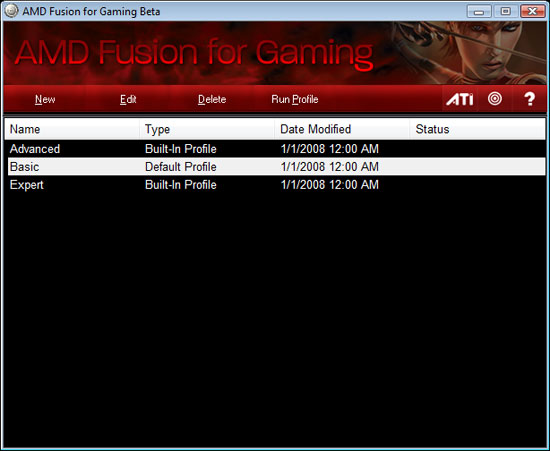 For an overclocking tool, we'd say it does the job, but there's something else that's even more interesting in this application. A little special sauce, if you will, that we would very much like to see available to anyone running Vista these days. But we'll get to that in a second.

The automatic overclocking for the GPU is just as simple as enabling overdrive, except you do it from a button on your desktop. Simultaneously automatically overclocking the CPU is a welcome addition for people who want to safely increase performance but don't know how or don't want to chance overclocking manually. While AMD does offer an overdrive equivalent for their CPUs, combining both CPU and GPU overclocking into one utility is convenient. But this aspect of the tool isn't really for people who already know how to overclock.

Additionally, like the overdrive feature that already exists on the GPU, clock speed and performance increases on the GPU will be temperature dependent. This means that if you are in a warm environment, you could see less benefit from the automatic overclock than someone in a cold environment. Case and component cooling is going to be key in getting maximum performance. And really adding a couple more case fans is still easier for the end user than teaching them how to effectively overclock their system. The only other issue is that performance can decrease with time while gaming because of the temperature increase in the system as it is being used. The temperature issue doesn't really impact the CPU, but then the GPU has a much large impact on overall game performance anyway.

Here's a look at some quick benchmarks we ran.


With Fusion on but without automatic overclocking enabled, scores were roughly the same.


The really interesting thing about this application actually has nothing to do with overclocking.

The other day, while disabling some services before doing a little light morning benchmarking, I remarked to Anand that, you know what, I wish there was a button that could just turn off anything "Vista". He inquired: "You just want Windows 2000 with DirectX 10?" Precisely. Champagne would fall from the heavens. Doors would open. Velvet ropes would part.

Later that day, AMD calls us up to tell us about Fusion for Gaming and how, in addition to one-touch automatic clock adjustment, their tool would also shut down any specified applications and Vista services that were not needed or wanted during gameplay. Hitting the button to turn off overclocking also restarts all these applications and services. AMD is giving me exactly what I asked for. And it's not that I couldn't do it all myself: it's just that it takes forever to make sure Vista is running the way I want it to for my benchmarks. 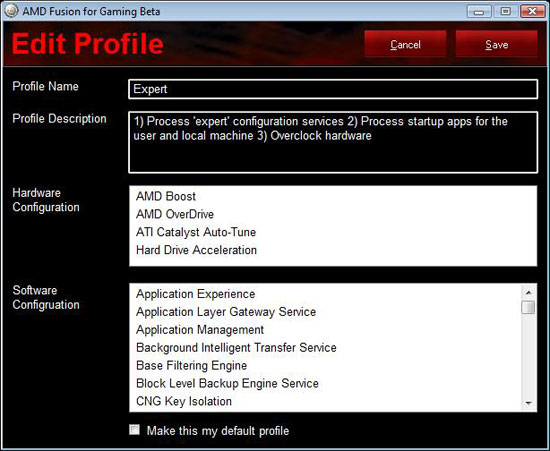 Each profile can be edited to specify exactly what to turn off and on.

Honestly, without the overclocking bit, average performance doesn't really improve from a clean Vista install. But Vista is known for its random decisions to do something in the background that really isn't necessary while a game is going on. Every once in a while we'll see a random hiccup or pause that has nothing to do with the game or the hardware. Doing multiple benchmark runs reduces this as a factor in our tests, but it still affects people who actually play games, and it's not something that is consistent or predictable.

But the biggest benefit to the average non-enthusiast consumer would probably be shutting down background applications and restarting them. Things like Windows Defender and virus scanners and messaging programs and email programs and all the little random stuff people like to have up and running while they are surfing the web or getting work done. Any one of these programs might not really impact performance, but having a lot going on just increases the chance of stability and performance issues. An easy way not only to shut all this down, but also to bring them all back up, would go a long way in helping average gamers get more out of their system.

My wife Laura, for example, loves playing Civilization. But her computer, in addition to being a little underpowered, has a bunch of stuff running on it all the time. I had to teach her how to go through and shut everything down in the notification area of the taskbar and how to kill running processes from the task manager. This isn't something she likes doing -- she just wants to play her game. I told her about this button and she really wanted it.

Of course, then I had to tell her she can't have it because she has an Intel processor in her computer and AMD requires the tool only be run on their hardware. She was not happy about that. Especially since she saw that this functionality clearly has nothing to do with hardware.

When I asked her if this software would motivate her to buy AMD hardware, she said she would continue to go after the fastest hardware she could get within her budget. If that happened to end up with an all AMD system then she'd love to use the tool, but it wouldn't change her purchasing decision.

Our strong suggestion to AMD is to make a "lite" version of the software that only handles shutting down and restarting applications and services that would run on all hardware. Part of our request is selfish: we would really like to have this to aid in improving benchmark consistency. But we also think this would have a lot of appeal to every gamer out there who has ever had to shut down an application, turn off a background task, or kill a process before running a game. While this doesn't cover everyone that plays games, it is going to be a very sizeable chunk.

I've briefly looked around but haven't found any other tool like this out there. AMD has the opportunity to really fill a niche here. If they position themselves as the standard for this type of software, they stand to benefit quite a bit from it. We do understand the platform focus, but there is a major branding opportunity here if they open up a cut down version of the software to all gamers. Imagine if every Intel + NVIDIA system had an AMD button sitting on the desktop. That wouldn't be a bad move for AMD by a long shot.

The enthusiast market is always going to be determined by hardware performance, and no software is going to change that. Of course, this tool is aimed at the more mainstream gamer, and with that target branding is even more important. For gamers who just want a good computer, associating a good tool with your name can go a long way. Now, I'm not a fan of marketing in general, but I'm much less a fan of unnecessarily restricting the use of software. Especially when I want to use that software. I'm just saying that it would by no means be a loss to keep the automatic overclocking bits for a platform only version and let the rest of it run on any system.

In any case, there it is. AMD Fusion for Gaming: automatic overclocking with some special sauce.