When Olympus and Panasonic announced their new Micro Four Thirds standard in early August, everyone expected Micro Four Thirds to quickly make its way to point and shoot cameras. That will still likely happen as there are many advantages to using the comparatively huge Four Thirds sensor in P&S cameras to break them out of the technology wall imposed by current resolutions on the tiny P&S sensors. 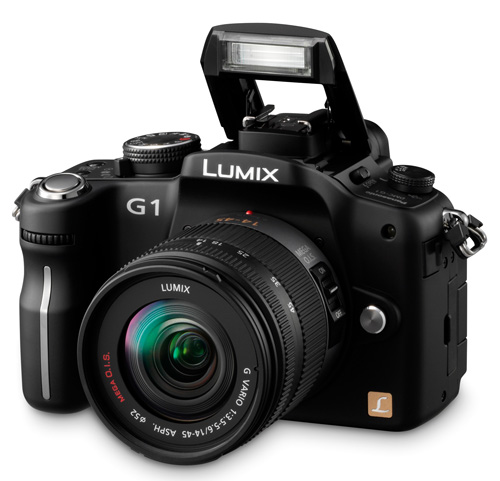 What was not foreseen was a Panasonic G1 Micro Four Thirds system camera with top-drawer features, 12MP Live MOS sensor, and a 3" tilt-and swivel LCD like the one featured on the Olympus E-1. Most assumed Olympus was the driving force behind Micro Four Thirds, but now it appears Panasonic pushed this standard to market.

In many ways this move really makes sense as Panasonic, who is a major player in other optical imaging, has a miniscule market share in the DSLR market, with DSLRs featuring Leica optics that mount on Olympus/Panasonic Four Thirds mount. It is no secret Panasonic makes the Olympus sensor as well as their own, and Panasonic would dearly love a much larger share of the sensor market than they now have. Sony is their major rival in other optical markets and Sony is dominant in the digital sensor market with only Canon as major competition. Panasonic wants a larger piece of that pie.