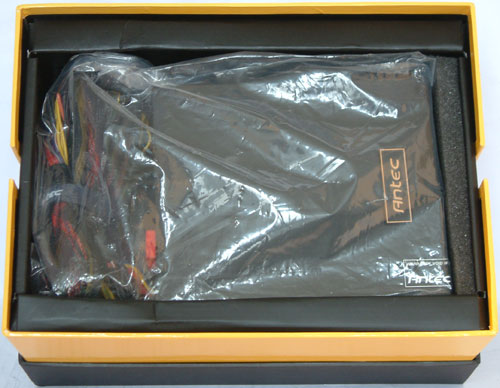 The Signature power supply comes in a big box with a matte black paper wrap around it. This time the package doesn't show much information about what the power supply looks like or its features as the packaging only has the Antec and Signature logos printed on it. The back shows the specification of the power supply, some certifications, and a European flag that suggests this is the European version of this power supply. This only means there's a different power cord inside - one for the US and a different one for the UK because of differing plug shapes. The approach to packaging is smart, as Antec doesn't need to have different boxes. They just change the paper wrap and cord for each specified market and version, lowering packaging costs. [Ed: Who really cares about the box after you've installed the PSU anyway, right?] 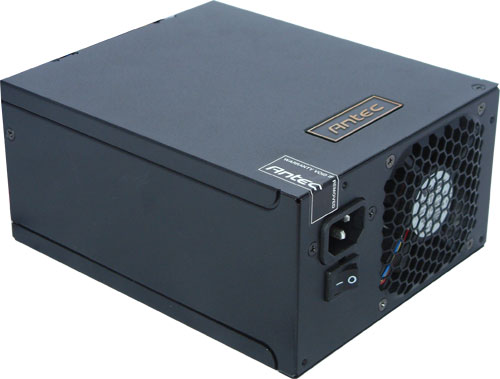 The power supply looks the same as what we saw in Las Vegas at the beginning of the year. The housing is matte black and there is only one 80mm fan installed on the rear of this PSU. The fan is guarded with a grille punched out of the housing. The sides show significant differences from other power supplies, though. It has more to do with the internal arrangement and cooling, which is similar to that of the Silver Power PSU we tested last year. The top (which will be the bottom when mounted) has a small Antec logo embedded in it for identification and understated good looks. Some companies try to do fancy stuff from time to time, but in most cases PSU "bling" is just another area that could be skilled in order to reduce the selling price.

The front - which is located inside the case when mounted - has four ports for the cable management and a little more than half is perforated for the ventilation of the power supply. It is very difficult to design a power supply with an 80mm fan and cable management, as with this setup the manufacturer will need to have the whole side open or perforated for airflow. If you install a 120mm fan on top, you will have the whole front on disposal to install the cable management as has been shown with other manufacturers. Silverstone also runs this kind of setup, and we will see it in one of our future reviews, but they have a different approach to this problem. On this power supply there are two red and two black jacks on the right-hand side, beside the fixed cables. Here the user can connect additional peripheral cable harnesses and two more graphics card connectors. 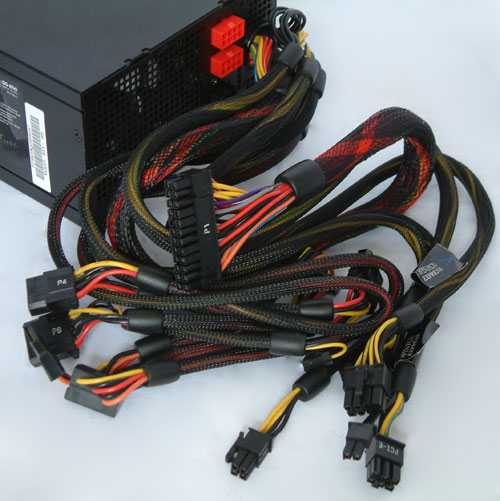 There are many cables connected to the power supply already, which will be adequate to power up an average PC system. The jacks are meant for people who need more connectors than the ones already at their disposal. All of the cables come nicely sleeved. There are two 6/8-pin PEG connectors, a 4-pin and 8-pin ATX12V/EPS12V connector for extra CPU power, and one harness each of SATA and Molex connectors already attached to the power supply. Each of the peripheral harnesses has three connectors and comes with a minimum length of 20"/50cm and maximum length of 30"/80cm. All the other fixed cable harnesses have a length of 20"/50cm. 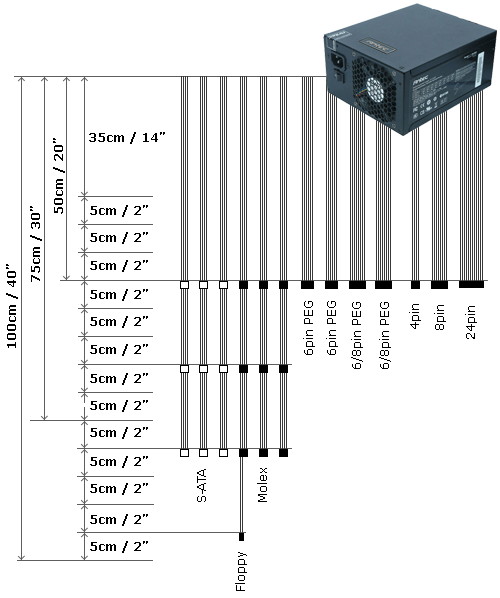 Antec has put two more of each peripheral harness in the box, which means in the end a user could have up to nine Molex and three SATA connectors or nine SATA connectors and three Molex. There are only two jacks on disposal which does mean that the four delivered extra harnesses cannot all be used simultaneously, but the user does have the choice to tailor their cable harness choice to his needs. If you're running an SLI/CF setup you are able to connect the additional two 6-pin PEG connectors to the red jacks at the back. 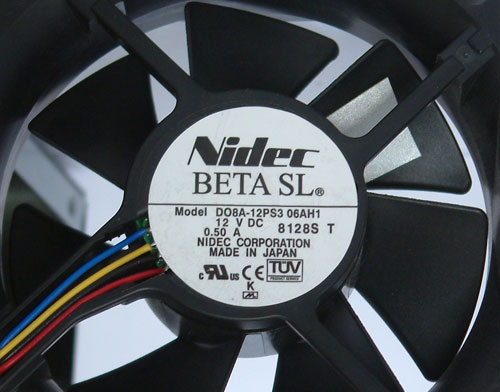 There is an 80mm Nidec fan installed in this power supply. The company website unfortunately doesn't give much information about this particular fan as the only information is about the DO8A fan without the 12PS3 ending and a DO8K that has the 12PS3 ending. The problem is that DO8A is a ball bearing and DO8T is a sleeve bearing type fan. None of these fans matches the description on the back of the fan or our measured maximum speed of 4600RPM, but it can also run slow and that might be of importance in our tests.