Canon started the whole consumer Digital SLR market in the Fall of 2003 when it surprised the world with the announcement of the original $899 Digital Rebel (EOS 300D) or $999 for the kit with a 18-55mm lens. That was the first DSLR to crack the $1000 barrier and it sold by the truckload when it started shipping in late 2003. This 6MP masterpiece of cheap silver-painted plastic and a pentamirror is without doubt one of the most important camera introductions in history. It sold in huge numbers, and most consider that first Rebel revolutionary in its impact on the SLR market. It certainly changed the directions in digital photography forever.


With the introduction of the EOS 450D the Rebel is now in its fourth iteration, and each new Rebel is an event that captures the attention of the photo market. Canon usually has a surprise or two in store with each new Rebel. It has become a tradition. Unlike competing stripped-down entry models, the Rebel series seems to conquer new territory with each new release, and the XSi continues that tradition. In fact in many ways the XSi is a much more exciting new camera than the 40D was when it was introduced just 6 months ago. 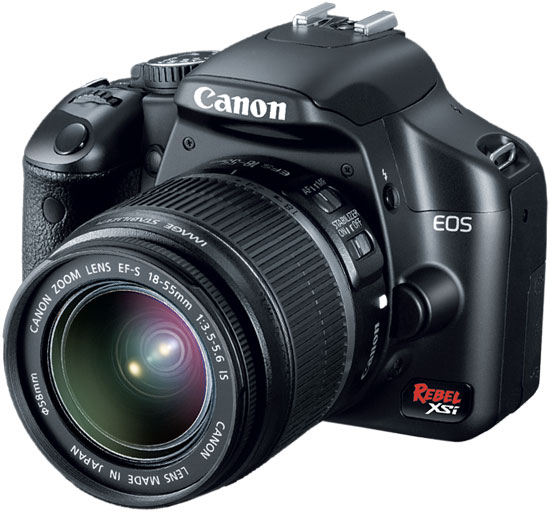 The new Canon is the first consumer Canon to feature a 12MP sensor. The Canon 40D, the top prosumer model, has a 10MP sensor. This is almost becoming a Canon tradition as the entry XTi was introduced with Canon's first 10MP sensor. The XSi also pioneers the best implementation of Live View in the entire Canon line, being the first to feature either regular Live View with mirror-flip for focusing, or a new contrast detection focusing that does not require a screen blackout. The XSi is also the first Canon to ship with an economical IS kit lens as standard, and the redesigned 18-55mm IS lens is a much-improved match to the resolution demands of a 12.2MP sensor.

The XSi is known in the rest of the world as the 450D, which should be its rightful name in the US. However, someone in Canon marketing believes US buyers care about the Rebel name, so Canon continues that tradition to this day. Those old ads with Andre Agassi are just that - old ads - and no one cares any more. It's even worse in Asia where they still call the 450D the Kiss.


It is also interesting to compare the entry Canon DSLRs to the evolution of the prosumer xxD series. Canon has fitted the XSi/450D with their new 12.2MP CMOS sensor, while the more expensive prosumer 40D is using the 10.1MP sensor. This is similar to the last generation XTi at 10.1MP with the 30D at 8.2MP. This will give Canon fans another opportunity to argue that resolution doesn't matter much, but this time around the prosumer Sony A700 and D300 both sport an excellent 12.2MP CMOS sensor with arguably better noise control than the 40D. The competition will make the "resolution doesn't matter" argument a little more difficult in this iteration. There is also the prosumer Pentax K20D with a 14.6MP CMOS sensor that is topping many of the resolution tests.

The new XSi, on the other hand, does compete exceptionally well in the entry DSLR space. The 12.2MP sensor, dual Live View, 9-point autofocus, and 3" LCD make the XSi stand out from the budget SLR crowd. Canon even threw in a Digic III processor with 14-bit A/D conversion for image processing on a par with the 40D. In reality, the XSi needs to be considered the top of the current budget class, and it will compete there with cameras like the Sony A350. The very capable XTi will continue in the Canon line, but it is now positioned as an entry model. The 8MP Canon XT is dropped from the line, making 10MP the new starting point for Canon DSLRs.