Shiver me timbers! Walking the plank with Gigabyte…

The NVIDIA 680i board had a brilliant launch, followed by a flame out as problem after problem was discovered and then fixed, and afterwards it held a steady course as being a serious performance alternative to the Intel 975X, P965, and P35 chipsets. Of course, the real selling point is that the 680i was the only performance-oriented chipset (650i on the low-end) offering SLI capability for the Intel platform.

After the initial launch of reference board designs, manufacturers like Gigabyte, ASUS, DFI, and MSI started launching their own designs based on the 680i and 650i chipsets. While NVIDIA appeared supportive of these designs, privately reference and non-reference partners told us that competition was alive and well between NVIDIA and the “outsiders”.

It was sort like bringing a knife to a gunfight; true, the “outsiders” had solid designs and great feature sets, but the boards just always seemed to be a step behind the reference designs when it came to performance or bug fixes. The major reason for this is the fact that NVIDIA controls the base microcode for the BIOS, not to mention the advantages they have when it comes to tuning and optimizing the chipset.

We remember distinct conversations with several of the partners talking about their code seemingly being a step or two behind the reference board. Right or wrong, this is the price you pay as a manufacturer when stepping outside of NVIDIA’s reference board program. It continues to this day with the 790i boards, as optimized settings (the mysterious P1/P2 switches) for the reference board design are not available yet on the third party boards as one example. We are sure there will be more as time progresses but it is up to NVIDIA to run their business as they see fit.

That provides some background information to the public relations disaster surrounding the Gigabyte GA-N680SLI-DQ6. When launched, this product was one of the most feature rich boards ever released to the public and its performance was very good at the time. In fact, we thought Gigabyte had placed a little too much emphasis on the bling and not enough on ensuring everything worked well together. A few BIOS releases solved most of the outstanding items - except for those that were driver related, especially under Vista as NVIDIA took their sweet time getting decent drivers.

All was well for the most part until Intel launched the 1333MHz FSB quad-core processors. This is the point in the story where things went south in a hurry, not only for Gigabyte but also for other board manufacturers. It turns out that the QX6850 not only required significant BIOS code changes, but also capacitor, chokes, and electrical layout changes as most boards could not handle the new processor requirements.

This board had a very robust design and the 1333MHz FSB Core 2 dual-core CPUs worked fine. In fact, Gigabyte honestly thought they could get the QX6850 working correctly with a BIOS update since the QX6700 could operate at 1333 when overclocked with a revised BIOS. We were able to get the board to POST and enter the OS, but it was never stable with the QX6850 at stock settings. The QX6700 worked fine but it was nearly impossible to overclock past 335FSB with any success, so it was on the bleeding edge already with a mild overclock from 266 to 333. We had our doubts, but after speaking with the engineers we passed along the same information in our forum updates.

Gigabyte continued working on the BIOS, but each beta that was released really did not improve the situation and it got to the point where the CPU Support List was finally updated to remove the QX6850. We are still putting the timeline and discussions together for a follow up, but at this point it is evident that departments within Gigabyte were fractured on exactly what was going on and what was being told to the owners of this board from technical support, customer support, websites, and public relations. 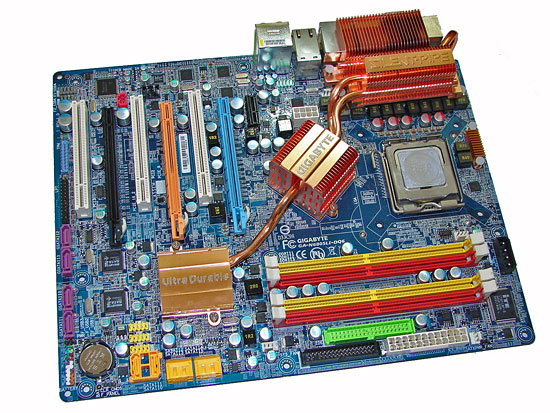 Remember our complaints about the CPU support list and the marketing information provided on the product description pages with the 780G boards? Well, here we are again with the same problem, only it occurred as early as June of 2007. The original website information discussed support and capability for 1333MHz processors, while quietly the CPU support list page told another story. The product packaging clearly states 1333MHz support while advising the customer to check the website for proper memory support, not CPU support. This is one of many mishaps that happened in the summer to fall time frame last year.

Gigabyte made a decision not to revise the board to ensure 1333MHz quad-core support, as NVIDIA had done the same thing with the reference boards. This turned out to be a critical mistake in our opinion, and we privately let Gigabyte know about it. Gigabyte personnel had told us the 780i was right around the corner and they were concentrating on getting that board out quickly to address not only the current CPU support problems but also the upcoming Penryn based CPUs that required yet another series of changes to the capacitors, chokes, and electrical layout on the revised 680i/650i boards. (Trying to figure out what happened between NVIDIA and Intel is difficult.) It sounded reasonable and we inquired about a trade up program or something similar for owners of the board. Our ideas were taken under advisement and I really believed at this point that Gigabyte would figure out a way to support owners who wanted to move up to the latest and greatest processors.

During the fall, we found out that Gigabyte might or might not produce a 780i board. By this time, NVIDIA had already delayed the launch several times and we had just received word that the 780i was little more than a 680i plus the NV200 bridge chip for PCI-E 2.0 operation. This did not bode well in our opinion, and we asked Gigabyte for a solution. The decision about the 780i was still up in the air but Gigabyte was also discussing the 790i as a possible replacement.

After the holidays, we pressed Gigabyte at CES to do something immediately about this situation. It was obvious from our forum members that their patience was wearing thin (we're being nice here). Whether it was a trade-up program, rebates, or replacement with an Intel board did not matter, but something had to be done. The personnel I spoke with at Gigabyte were cognizant of this request. Believe me; they were just as concerned and worried about it as we were, as you are.

We sailed through February without any responses, and honestly I took my hands off the wheel for a couple weeks when dealing with Gigabyte on this subject. I want to thank the forum members who contacted me about reviving this subject in March. This controversy had turned into a firestorm by mid-March and we approached Gigabyte again about ideas on how to provide a fair resolution for owners of this board.

This time we were excited to hear that Gigabyte was developing a program and it would be available in early April. We heard several different ideas and most seemed perfectly acceptable to us. Sadly, once again, it appears the left hand does not know what the right hand is doing at Gigabyte. We have viewed several posts in our forums about a response from Gigabyte stating that a replacement program is in place for people who own the 680i board and a QX6850 only. We do not have confirmation if this is an actual replacement program or not; we certainly hope not as it is not right or fair in our opinion.

Our problem at this point is that Gigabyte Taiwan and China have been on holiday the last few days and we have not been able to confirm the details of this program or others. It will be Monday before we have an update. In the meantime, we have to wait - a wait that has been going on way too long. Quite frankly, we are surprised with the situation as it stands. Gigabyte has been one of the bright spots in this industry for the past couple of years. They have improved their quality and breadth of products tremendously while focusing on customer support and service. How or why this situation with the 680i has occurred is beyond us. Hopefully it is a one time incident and Gigabyte will make good on their promises to support the loyal customers of this board. It would be a shame if this did not happen as products like their 780G board are class leading in just about every way.

These are just a few of the hot topics around the lab. We will go into more details in our next article. One of the biggest items is how well the P35 chipset handles the Penryn based processors. Are the problems facing users right now chipset related or something in the BIOS? We will have some answers for you along with our take on the state of the audio market. In addition, we will look at what we despise about the new releases of PowerDVD 8 and WinDVD 9 - maybe it’s not their fault, but whose is it?

In the meantime, we would like to pass along a nugget of information that might assist our readers in getting the ASUS Xonar or Auzentech X-FI Prelude 7.1 working correctly on your new 780/790i board. If you are receiving the dreaded Code 12 or Code 31 message pertaining to the device not finding enough free resources or does not work properly, please visit this page for instructions on getting these cards or others to work.