Although the release of Core 2 Duo E8000-series Wolfdale processors will never be as groundbreaking as the Conroe launch during the summer of 2006, Intel has done a fine job of building upon their already enormously successful Core 2 platform. Reductions in power consumption, improvements in energy efficiency (especially at idle), and the amazing overclocking capacity of these processor make them downright irresistible. Now that we've had a good chance to experience all that this new 45nm process has to offer, we will be hard pressed to buy anything else. Without a doubt, Intel has re-proclaimed their dominance in the marketplace of technology.

One of the most popular uses for processors of this caliber is 3D gaming. If excellent performance is already possible when running at default speeds, just imagine the stunning frame rates displayed when overclocking to 4GHz and beyond on air-cooling alone. (Ed: Assuming you have the GPUs to back that up, naturally.) Never before has achieving these levels of overclocks been so easy. However, don't become tempted by the incredible range of core voltage selections your premium motherboard offers; it's important not to lose sight of the bigger picture.

These processors are built on a new 45nm High-K process that invariably makes them predisposed to accelerated degradation when subjected to the same voltages used with last-generation's 65nm offerings. Although we certainly support overclocking as an easy and inexpensive means of improving overall system performance, we also advocate the appropriate use of self-restraint when it comes to choosing a final CPU voltage. Pushing 0.1V more Vcore through a processor for that last 50MHz does not make a lot of sense when you think about it. 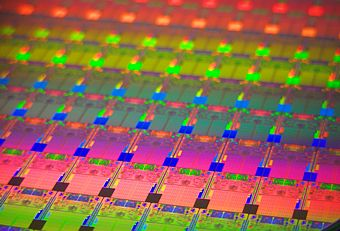 More than a couple Penryn dies will comfortably fit on a single 300mm wafer used in the manufacturing of these processors.

Perhaps even more exciting than the prospect of assembling a game rig is the potential these processors possess for use in the HTPC arena. Some of our initial tinkering has allowed us to realize the hope of creating a complete home entertainment solution capable of full-load operation at less than 90W power draw from the wall. With the recent availability and - dare we say it? - affordability of Blu-ray drives in the US, the prospect of putting together an all-in-one multimedia powerhouse that runs both cool and silent is finally becoming a reality. Of the models soon to hit the shelves, the E8200 at 2.66GHz or E8300 at 2.83GHz are sure to be winners when looking for processors suited for just these types of low-power applications. Couple this with an Intel G35 chipset with integrated graphics, Clear View Technology, and onboard HD audio over HDMI and you have all the makings of a serious HTPC.

Intel has also worked hard to make all of this performance affordable. Many US retailers now stock the 65nm Q6600 quad-core CPU at less than $200, which places it squarely in the 45nm dual-core price range - something to think about as you make your next purchasing decision. However, if it comes down to the choice between a 65nm and 45nm CPU we would pick the latter every time - they are just that good. The only question now is exactly when Intel will decide to start shipping in volume.