In the earlier review of the ZEROtherm BTF90 we were somewhat amused by the butterfly shape of the cooler with a 90mm fan. The shape appeared more a gimmick than anything that could improve performance, so we really didn't expect much from the cooler. However, the performance of that upper mid-range cooler was anything but laughable. Cooling performance was very solid, leading to the conclusion that "...this butterfly carries a pretty good punch, yet the sting is nearly silent - just the way we like it." That review posted last August, and since then ZEROtherm has been hard at work on a larger cooler aimed at the top of the cooler performance charts.

The new ZEROtherm Nirvana does not look like a butterfly, but the influence of the original butterfly-shaped BTF90 is clearly there in the cooling fin design. That is certainly a good thing if Nirvana works as well at the top of the cooling heap as BTF90 did for the less expensive 90mm mid-range coolers.

For those not familiar with ZEROtherm, it is the marketing division of a company called APACK, a company known more for targeting the OEM market. Since the success of Zalman as a cooling company based in Korea, other Korean companies have aimed for a slice of the enthusiast cooling pie. APACK is one of those companies who manufactures in Korea, and the ZEROtherm division is dedicated to marketing enthusiast level cooling solutions.

APACK was established in 1999 by three engineers from ETRI (Electrics and Telecommunications Research Institute) with extensive experience in thermal solutions and advanced packaging design (packaging meaning integration of multiple technologies). Based in the city of Daejeon (in the Korean Silicon Valley), APACK is still mainly an engineering company. Phase one of APACK's growth was producing OEM solutions for companies like Samsung, Dell, and LG. ZEROtherm is part of phase two, which is direct marketing of APACK thermal solutions. 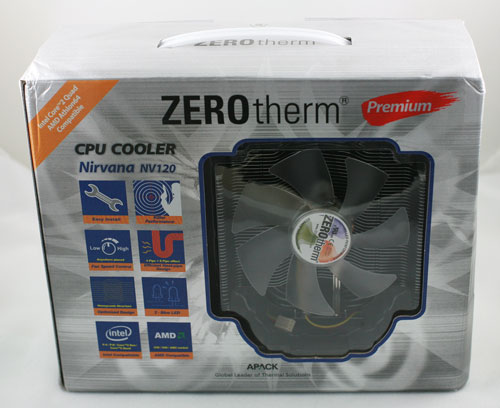 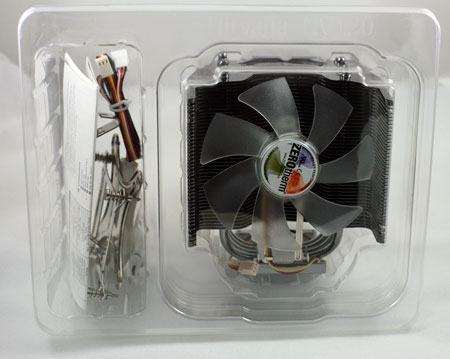 As the Nirvana builds on the success of the BTF90, it is no surprise that the packaging uses the same basic silver background and color scheme as the BTF90. However, like the cooler itself, the Nirvana doesn't carry the theme quite as far. The package is more basic without the distinctive sloped sides used in the BTF90 packaging. 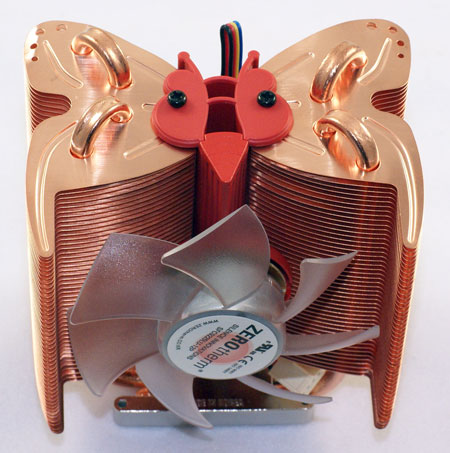 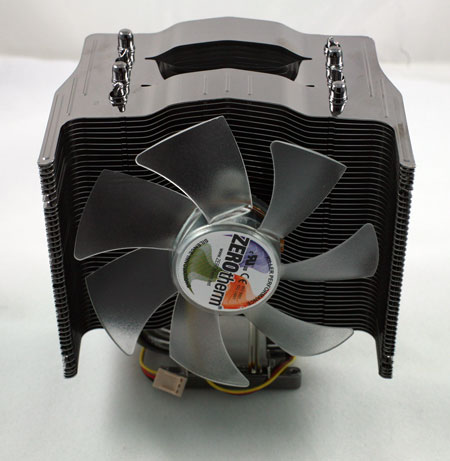 Inside the box you will find the fully assembled Nirvana NV120, including an integral and non-replaceable 120mm fan. The Nirvana uses the cooling fin shape that worked well on the BTF90, with the extensions that wrap around the fan. However, ZEROtherm did not highlight the butterfly shape as they did on the BTF90.

The smaller cooler was also all copper, where the Nirvana uses nickel-plated copper for the base and heatpipes. The Nirvana fins are aluminum and not pure copper as seen on the BTF90. Both coolers use four heatpipe loops, but the configurations are a bit different. The Nirvana is both larger and heavier than the BTF90 and it takes up more board and case real estate - hopefully with the result that it cools better. 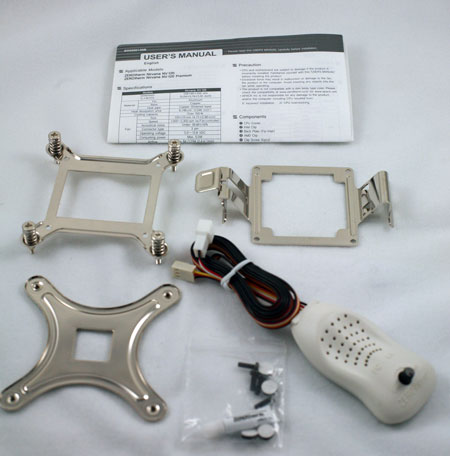 CPU and mounting options are very similar to the BTF90. Mounting hardware is included for Intel Socket 775 and AMD Socket 754/939/940/AM2. Also included is ZEROtherm thermal grease and a fan controller. 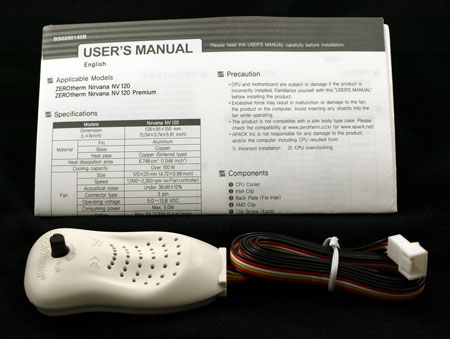 Also included in the Nirvana package are mounting screws and a multi-language user's manual. You get everything needed for installing the NV120 except a screwdriver.

The ZEROtherm Nirvana is an upgrade of the BTF90 to improve cooling with a 120mm fan and a larger, heavier cooler. Does the NV120 do what ZEROtherm intended? Is it a better cooler than the small and excellent BTF90?