by Anand Lal Shimpi on January 9, 2008 12:00 AM EST
21 Comments | Add A Comment
21 Comments + Add A
Comment
As we wrote about at last year's IDF, Menlow is the name of this new ultra mobile platform that Intel is working on.  In Intel's terms the platform refers to the CPU + chipset, much like how Centrino is a combination of an Intel CPU, Intel chipset and Intel wireless adapter.
The Menlow project began back in 2004, so what you're hearing about today is much like what Centrino was back in 2003.  We're on the verge of something very big (I could insert a pun here about how Menlow is actually very small and it's ironic that it's also something very big, but I won't; you can thank me later).
Menlow consists of the Silverthorne processor and the Poulsbo chipset.  If you're in dire need of yet another codename, the core used in Silverthorne is also known as Bonnenn.  Silverthorne is a brand new architecture, highly simplified from current Core 2 chips (thus reducing die size and power consumption) but still compatible.  Silverthorne is an x86 chip, meaning it can run the same applications as your desktop and notebook; and it's technically ISA compatible with Merom (65nm Core 2 Duo), meaning it has support for up to SSE3 but lacks SSE4 instructions. 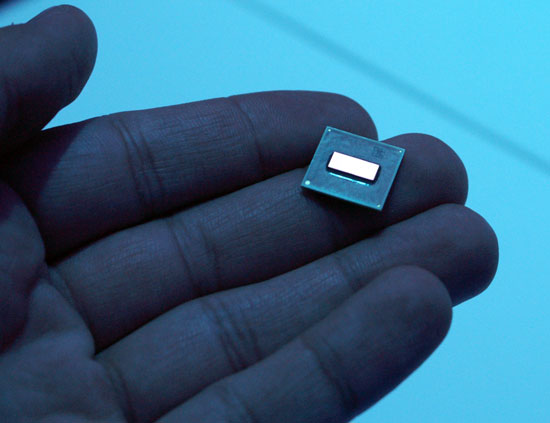 You can see the chip in the picture above; it's tiny.  Because of its size you can guess that it's not a very complex core, and not full of cache, despite the obvious reductions in hardware Intel promises that Silverthorne will offer performance comparable to its 90nm Pentium-M from 2004. 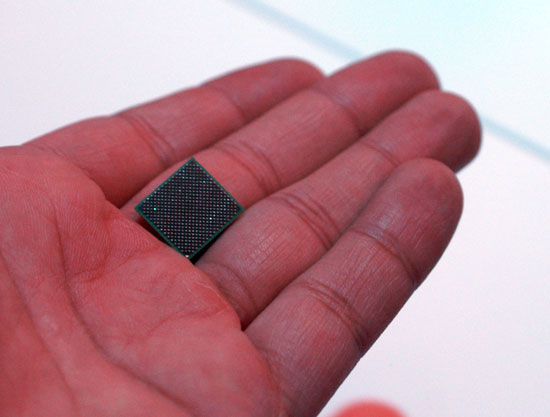 We asked for clarification on these performance expectations as this wasn't the first time we'd heard it from Intel.  What we got was a promise that Silverthorne, at launch, will be available in clock speeds that the Pentium M was in 2004 and at comparable performance levels as well.  Looking back at our original review of the 90nm Pentium M from 2004 we see that the chip launched at frequencies ranging from 1.0GHz up to 2.0GHz.  Intel actually had Silverthorne running at its CES booth, at clock speeds ranging from 600MHz to 1.6GHz. 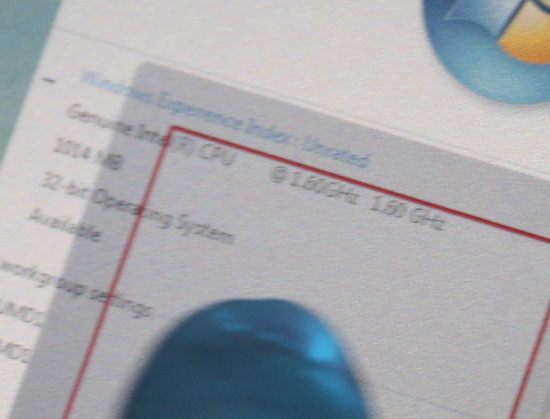 Intel is targeting 10x lower power than its current ultra low voltage processors, meaning a TDP of 0.55 - 0.6W.  These TDPs will be possible at the low end of the clock speed spectrum, which so far means 600MHz.  The higher clocked parts will obviously consume more power, but Intel says that it'll still be significantly less than 5.5W.
From a performance standpoint, Intel is shooting for Dothan (90nm Pentium M) level performance in a 5" form factor with Menlow/Silverthorne. 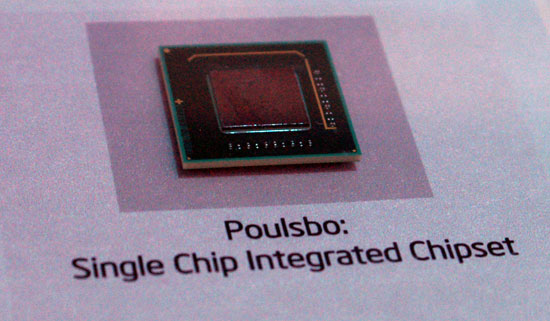 While Silverthorne is built on a 45nm process its chipset, Poulsbo, isn't.  We couldn't get confirmation on the manufacturing process but we'd suspect that it's at least 65nm, resulting in a much larger die than the Silverthorne processor itself as you can see from the pics above.