It's surreal isn't it? Is this how you pictured it? With forty-three days left in the year, AMD is finally letting us publish benchmarks of its long awaited Phenom microprocessor. The successor to K8, AMD's most successful micro-architecture to date, and the cornerstone of AMD's desktop microprocessor business for 2008: Phenom is here.

But shouldn't there be fireworks? Where's the catchy title? The Star Wars references were bound to continue right? Why were there no benchmarks before today, why are the next several pages going to be such a surprise?

AMD had been doing such a great job of opening the kimono as its employees liked to say, giving us a great amount of detail on Barcelona, Phenom and even the company's plans for 2008 - 2009. The closer we got to Phenom's official launch however, the quieter AMD got.

We were beginning to worry, and for a while there it seemed like Phenom wouldn't even come out this year. At the last minute, plans solidified, and we received our first Socket-AM2+ motherboard, with our first official Phenom sample. What a beautiful sight it was:

These chips are launching today, with availability promised by the end of the week. Phenom today is going to be all quad-core only, you'll see dual and triple-core parts in 2008 but for now this is what we get.

The architecture remains mostly unchanged from what we've reported on in the past. This is an evolutionary upgrade to K8 and we've already dedicated many pages to explaining exactly what's new. If you need a refresher, we suggest heading back to our older articles on the topic.

The Long Road to Phenom

Ever wonder why we didn't have an early look at Phenom like we did for every Core 2 processor before the embargo lifted? Not only are CPUs scarce, but AMD itself didn't really know what would be launching until the last moment.

At first Phenom was going to launch at either 2.8GHz or 2.6GHz; then we got word that it would be either 2.6GHz or 2.4GHz. A week ago the story was 2.4GHz and lower, then a few days ago we got the final launch frequencies: 2.2GHz and 2.3GHz. 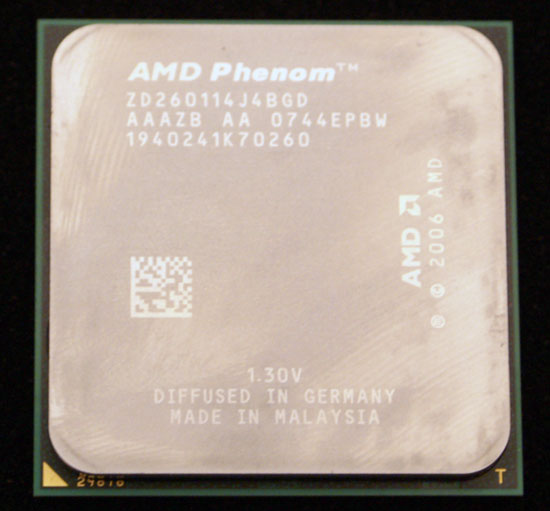 The problem is, and I hate to ruin the surprise here, Phenom isn't faster than Intel's Core 2 Quad clock for clock. In other words, a 2.3GHz Phenom 9600 will set you back at least $283 and it's slower than a 2.4Ghz Core 2 Quad Q6600, which will only cost you $269. And you were wondering why this review wasn't called The Return of the Jedi.

AMD couldn't simply get enough quantities of the Phenom at 2.4GHz to have a sizable launch this year (not to mention a late discovery of a TLB error in the chips), and the company was committed to delivering Phenom before the holiday buying season as these are tough times and simply waiting to introduce its first quad-core desktop parts was just not an option. Rather than paper launch a 2.4GHz part, AMD chose to go with more modest frequencies, promising faster, more competitive chips in Q1 2008. It's not the best PR story in the world, but it's the honest truth.

It's worth mentioning that in the 11th hour AMD decided to introduce a multiplier-unlocked version of the Phenom 9600 sometime this year that will be priced at the same $283 mark. Whether or not it's called a Black Edition is yet to be determined.