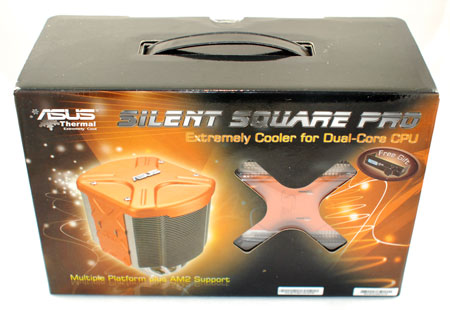 Unlike some competing products which try to tell you everything on the package, ASUS presents some nice photos of the product and the basic product specifications. The large Silent Square package contains the cooler protected by a rigid plastic clamshell and a smaller component box with adapters, instruction manual, and fan controller. As you would expect from ASUS the impression left by the packaging and attention to detail is one of quality. 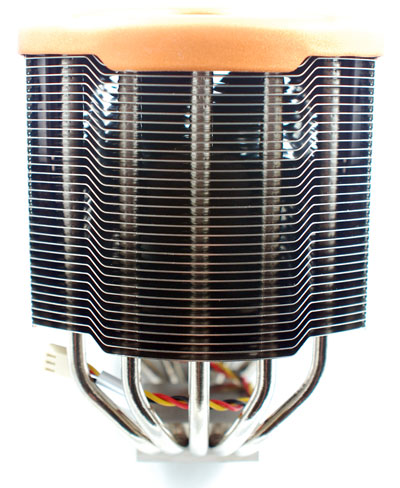 The Silent Square Pro and Silent Square use the same base heatsink, but different fans and cladding. Five U-shaped heatpipes support front and back cooling fin arrays with a 90mm fan sandwiched in the middle of the heatsink. This is the same idea used by the Tuniq Tower 120 on a smaller scale. Unlike the Tuniq, which uses a common and easily replaced 120mm fan, the Silent Square uses a very uncommon 90mm fan. This means you will likely be forced to run the Silent Square coolers with the stock fans.

The Pro mounts a 2500 RPM fan and the regular Silent Square mounts an 1800 RPM fan. Both coolers shroud the heatsink to direct airflow. The Pro goes even further with top and side covers with airflow arrows embossed on the orange covers. 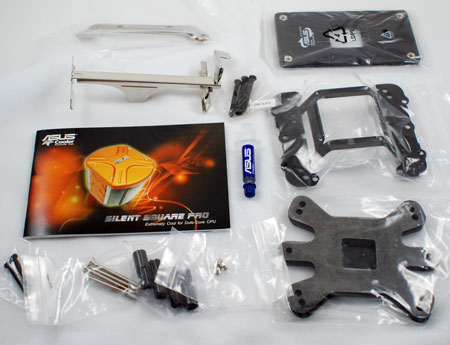 There are no mounts installed on the shipping ASUS Silent Square Pro, but the kit includes mount adapters for Intel 775 with two different backplates for different motherboard configurations. Mounts for AMD 754/939/940/AM2, and Intel 478 are also included. Since we have inadvertently killed a couple of motherboards with other "universal" back plates shorting rear solder points, it was good to see a second much improved plastic 775 back plate included. Also included is a small syringe of premium ASUS thermal paste and a clear set of color installation instructions. 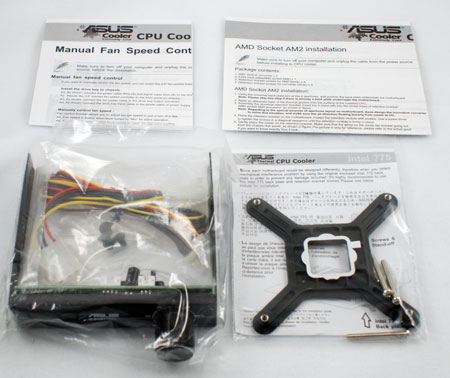 As mentioned, the ASUS Silent Square Pro includes a 3.5" bay fan controller with a blue led fan speed layout. This useful accessory makes it very easy to control fan speed and noise of the Silent Square Pro. Mounting in a 3.5" bay was easy and the connecting wires were long enough to reach from the bay to the cooler in most case designs.

You will need to remove the motherboard to install the ASUS Silent Square, but the mount installation is still simple on most motherboards. The holding clamp is a turn clip like you see on K8/AMD coolers. It installs quickly. Unfortunately, if your motherboard places the CPU socket near the top edge of the board, like the 680i does, you will have difficulty pushing the clip on a mounted board; there just isn't enough space between the socket and the power supply with the CPU near the edge. In that case you will need to unscrew the board just to push and lock the retention clip.

The Silent Square is still a big cooler, though it is a good deal smaller than a Tuniq Tower 120. It also weighs 745g (26.3 ounces), which is heavy for a cooler the size of the Silent Square. Fortunately the mounting method is very secure and it appears to distribute the weight evenly, which should provide some additional safety.


The fan included with the Silent Square Pro moves a lot of air for a 90mm fan, though the output would be considered moderate in a 120mm fan. The cooling fins are very closely spaced in the Silent Square design - closer than we have seen in other heatpipe towers. Fan noise level is not specified, but ASUS calls the cooler "silent". We will measure noise levels at low and high fan speeds in our testing.