Results for high-end memory are very close at tested speeds. Therefore, the scale range was reduced to better show the small differences in these memory benchmark results at each speed. Please keep this in mind when viewing the charts. A normal zero scale would make performance differences appear much smaller than these expanded scale charts. Values for all tested memories at each speed are included below each chart for reference.

The AT memory test suite uses Far Cry, Half Life 2 and Quake 4 for memory testing because they are sensitive to memory performance. 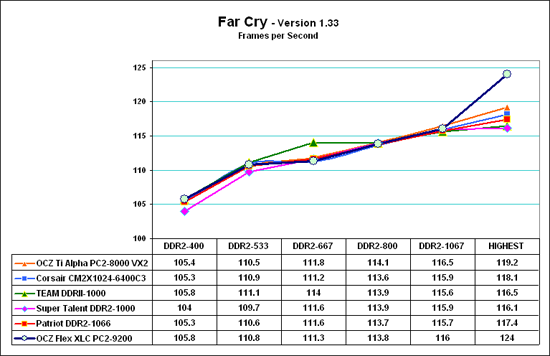 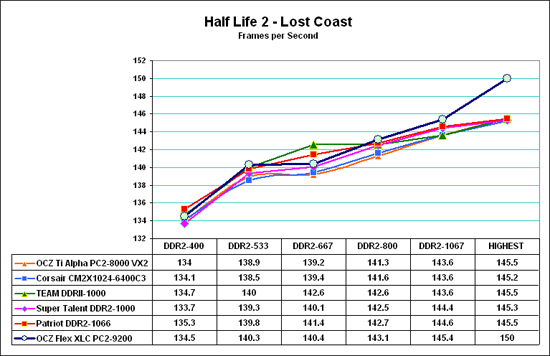 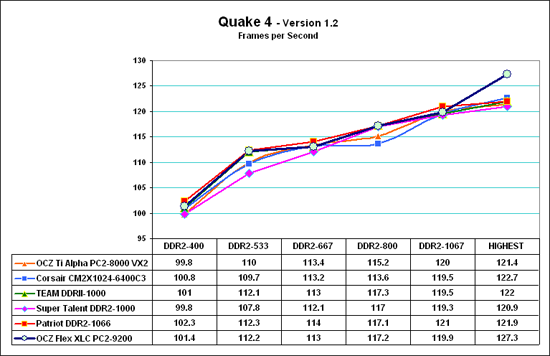 Despite the fact that memory is varying from 3-2-2-5 timings at DDR2-400 all the way to 5-5-5-18 timings at DDR2-1172 all three games continue to show improvement in frame rates as memory speed increases. Put another way, performance continues to improve as memory speed increases. This is the best evidence you will find to prove that increasing memory speed does increase performance - even to DDR2-1067 and beyond. The OCZ Flex XLC again mirrored performance of the other Micron-based memory until we reached the top speed. There it broke away from the pack, producing the highest game test results we have seen so far at the overclocked speeds. OCZ Flex XLC is a great performing memory. Even Air-Cooled the Flex XLC set new performance records in every test category, and there is still the promise of even better performance with water cooling.