After the incredible launch of Intel's Conroe earlier this year it's not too easy to follow that up, even if Intel is launching the world's first quad core desktop processor. The Intel Core 2 Extreme QX6700 is based on the new Kentsfield core, which we previewed not too long ago at IDF.

It's tough to tell a Kentsfield apart from a Conroe; although it sounds like a lot, 582 million transistors don't really feel any heavier than only 291 million (and it won't even sound like a lot after another week). With a heat spreader covering the flipchip cores, you can't tell that Kentsfield is nothing more than two Conroes placed on a single package. Much like Presler before it, Kentsfield is technically a quad-core processor with two separate die on the same package. 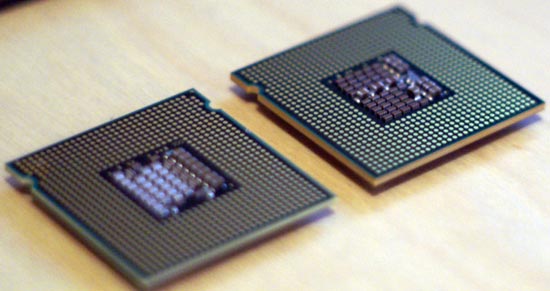 Core 2 Duo (left) vs. Core 2 Quad (right) - The only visible differences are the filter caps underneath the chip

We've shown in the past that there's no real world performance penalty to this approach to manufacturing, and there are numerous benefits from Intel's perspective. Yields are improved by producing a two die quad-core processor rather than a single die. The approach also improves manufacturing flexibility since Intel can decide at a very late stage whether to produce a dual or quad core processor after a die is fabbed.

The end result is you get 582 million transistors, built on a 65nm process, running at 2.66GHz for $999. You'll note that the price is equal to Intel's Core 2 Extreme X6800 with only two cores but running at 2.93GHz, and once again we're faced with the more cores or higher clock speed dilemma. In January 2007 Intel will introduce a slightly higher production model, the Core 2 Quad Q6600 running at 2.40GHz and a new $851 price point. Of course we'll benchmark both today.