by Gary Key on October 11, 2006 3:31 PM EST
29 Comments | Add A Comment
29 Comments
One of our favorite P965 boards in the labs over the course of the past few weeks has been the Gigabyte GA-965P-DS3. It has been a love and hate relationship at times as most first release motherboards are apt to do to a user. Let's be honest about this motherboard, the first two BIOS releases were just good enough that the first owners could get the board working properly but that was about it unless you had a magical combination of components. To be fair, the vast majority of P965 motherboards on launch day had several issues and some still do two months later. While the majority of these launch issues centered on memory compatibility and were easily rectified with either budget or very high-end memory choices, this chipset was designed for the mid-range performance sector, a sector that typically was not going to utilize generic DDR2-533 memory or spend more on DDR2-1000 modules than the cost of the motherboard and CPU combined. Over time the majority of issues have been solved through BIOS releases, updated memory SPD settings, and a more thorough understanding of the Intel P965 chipset and its capabilities.

Getting back to the Gigabyte GA-965P-DS3, upon release we encountered some memory compatibility issues, the JMicron IDE controller caused most optical drives to be stuck in PIO mode, there were sporadic overclocking issues with USB peripherals, and booting at various FSB speeds seemed to be the most common issues with the F1 or F2 BIOS. The memory compatibility issue was a show stopper at times. The primary issue was the board was providing the standard Intel specification of 1.8V for the memory at POST and several memory modules that defaulted to tighter timings with 2.0V or 2.1V would not allow the board to POST. One workaround was to place a 1.8V capable module in the board, boot, enter the BIOS, set the memory voltage at +.3V, save the settings, reboot, shut down, reinstall the original memory, and boot the motherboard. While not a sufficient answer to the problem, it did work for those having this boot issue. 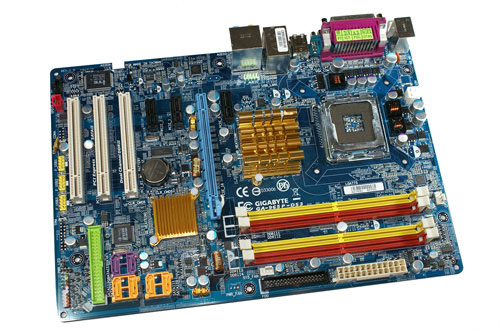 The F3 BIOS release solved the majority of these first release issues along with greatly improving memory capability. We found in our initial testing that the memory compatibility issues were random to a certain degree. These issues or lack of depended upon the BIOS release, memory manufacturer, memory IC utilized, and SPD settings. As an example we had two identical sets of memory from the same manufacturer, one worked fine, the other did not. It turned out the SPD settings were different between the two sets. We blame both parties equally for these issues as some of the memory SPD settings were incorrect along with the fact that the BIOS was not fully optimized yet. We found several motherboards that would not cycle properly when recognizing upon POST that the memory SPD had proper settings to default to in case of an issue. The other memory issue that still exists today is that most Micron D9 based memory modules will not allow the board to exceed a 450 FSB range when operating at a 1:1 memory ratio. This issue does not occur on the Gigabyte GA-965P-DS4 or GA-965P-DQ6 motherboards so we consider it to be a BIOS issue. We have spoken at length with Gigabyte about this problem and it is currently being addressed by their engineering group.

While the F3 BIOS was very stable and addressed many issues, the overclocking capability of the board was still not up to par with its technical specifications. The F4 BIOS improved overclocking for the vast majority of users although the E6600, E6700, and X6800 CPUs were still not clocking to the same levels as on 975X motherboards. Of course, we continue to believe the E6300 or E6400 CPUs are best suited for the P965 chipset. This is especially true for those who want to overclock these processors as the P965 chipset has proven itself up to the 600FSB level to date, although the memory performance penalty at that level is horrendous. The F5 and F6 BIOS releases resulted in additional memory compatibility, performance tweaking, and other minor fixes but the overclocking aspects were not really improved when compared to the F4 BIOS. In fact, the F6 BIOS introduced an issue for users of Creative Labs X-FI cards as the card would not be recognized properly or would just stop working altogether depending upon the combination of other components in the system. Our current F7 beta BIOS does not have this issue.

During our P965 motherboard roundup testing we settled on the F5 BIOS as it offered the greatest compatibility among a wide variety of components while offering the best overall performance with our components. We still had a few issues with this BIOS or the F6 we are testing with today. Our primary issue is the Micron D9 FSB limitation and our ability to operate an E6600 CPU past the 400FSB level in a stable manner with the stock 9x multiplier. We also found any FSB setting higher than 425 when running the E6600 at the 8x multiplier was typically not stable. Although we normally recommend the E6300 or E6400 for the P965 chipset, we find the E6600 to be in the sweet spot for CPU performance at this time. It has the slight performance advantage of the 4MB cache in most applications, a decent multiplier for overclocking, excellent price to performance considerations, and recent E6600 steppings are consistently hitting the 3.6GHz to 4.0GHz range on air cooling now.

Up until recently, most E6600 owners would have opted for the 975X based motherboards but recent BIOS releases from several manufacturers are allowing this processor to spread its wings on the P965 platform. Gigabyte has certainly taken note of this trend and is currently readying their F7 BIOS release that promises additional overclocking headroom for Conroe CPUs and full support for the upcoming Kentsfield processors. Gigabyte graciously provided us the F7 BIOS over a week ago for testing and we are excited to provide some initial overclocking results today with our F7E beta. The final F7 version is due to be released within the week. (Ed: Note that it is now released.)

Let's take a quick look at the overclocking performance of the F7E BIOS now.