Additionally, Quake 4 limits frame rate to 60 fps during gameplay whether or not VSync is enabled. Performance characteristics of a timedemo do not reflect actual gameplay. So why do we do them? Because the questions we are trying to answer have only to do with the graphics subsystem. We want to know what graphics card is better at rendering Quake 4 frames. Any graphics card that does better at rendering Quake 4 frames will handle Quake 4 better than another card. While that doesn't mean the end user will necessarily see higher performance throughout the game, it does mean that the potential for seeing more performance is there. For instance, if the user upgrades CPUs while keeping the same graphics card, having higher potential GPU performance is going to be important.

Our benchmark consists of the first few minutes of the first level. This includes both inside and outdoor sections, with the initial few fire fights. We tested the game with Ultra Quality settings (uncompressed normal maps), and we enabled all the advanced graphics options except for VSync. Id does a pretty good job of keeping framerate very consistent, and so in-game framerates of 25 are acceptable. While we don't have the ability to make a direct mapping to what that means in the timedemo test, our experience indicates that a timedemo fps of about 35 translates into an enjoyable experience on our system. This will certainly vary on other systems, so take it with a grain of salt. The important thing to remember is that this is more of a test of relative performance of graphics cards when it comes to rendering Quake 4 frames -- it doesn't directly translate to Quake 4 experience. 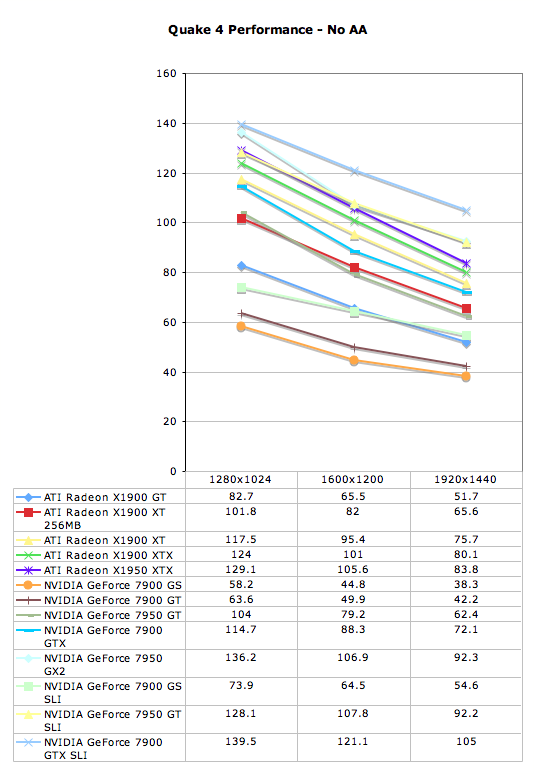 At resolutions over 1280x1024, the GeForce 7950 GT falls short of the X1900 XT 256MB. Even with all these cards offering playable performance at 1920x1440, it's still a better idea to stick with the card that will give you higher performance for less money. In this case, that would be the Radeon X1900 XT 256MB. That is, if you can get ahold of it at a reasonable price. 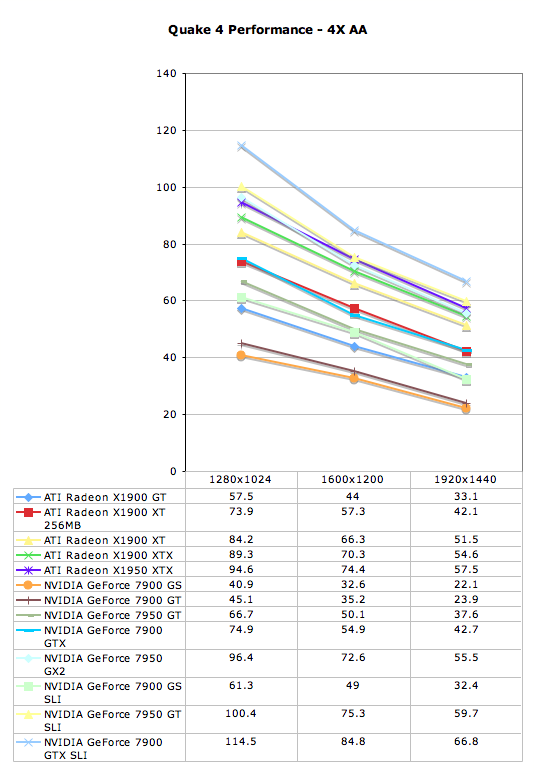 While these numbers are a little more cluttered with lower end SLI solutions falling on top of high end single card setups, the lead ATI has held since their release of Catalyst 6.8 remains strong, especially with AA enabled. Not only does the X1900 XT 256MB outperform the 7950 GT, it outperforms the 7900 GTX. Not even SLI is enough to give an advantage to NVIDIA in these tests, and the 7950 GX2 only barely edges out the X1950 XTX in performance.