Corsair is the most widely recognized brand of enthusiast memory in the world. It is widely distributed, making the Corsair brand easy to find just about anywhere you might be located. Corsair has been manufacturing high-speed memory since 1994, and as a result the company has supplier relationships with many computer manufacturers. Corsair maintains an extensive line of memory, ranging from their Value Select brand of low-cost memory to their top-end XMS line. 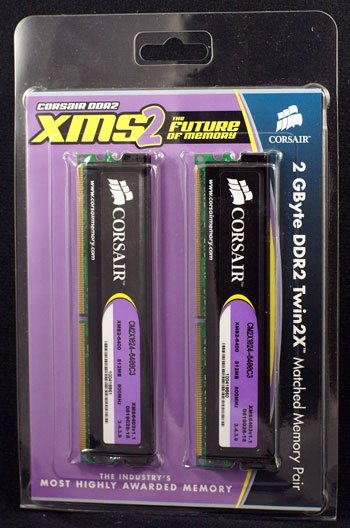 The Corsair 6400C3 is a member of the top-end XMS family, based on specially-binned Micron DDR2 memory modules with Corsair's new EPP (Enhanced Performance Profiles) SPD which can set highest performance timings on NVIDIA motherboards designed to work with EPP. When Corsair first talked with us about this new memory, we were told it was their absolute best DDR2 performer - capable of tighter timings and higher speeds than their other high-end DDR2 products.

The CM2X1024 6400C3 was supplied as a 2GB kit with a matched pair of 1GB DIMMs. Corsair claims theses modules are 100% tested as a pair at 3-4-3-9 timings at 2.2V. The DIMMs feature black heatspreaders and distinctive purple and yellow XMS2 packaging. Product information shows the 6400C3 only available as a 2GB kit; the Corsair web site does not list a 1GB kit with similar performance.


Additional Information on these super high-speed DIMMs is available in PDF form at the Corsair website. Corsair offers a Lifetime Warranty and support is available in many forums.

In recent years OCZ has won respect from enthusiasts as an innovator in memory and power supplies. Those innovations include their EL (Enhanced Latency) memory, their high-voltage VX line, and the very successful line of high-power OCZ power supplies.

OCZ was the first memory manufacturer to produce and ship new memory kits based on the latest Micron memory chips. We reviewed the OCZ EL PC2-8000 XTC in early April, and while there are many competing kits based on Micron memory these days, those early OCZ DDR2-1000 DIMMs still compete very well with any memory on the market. 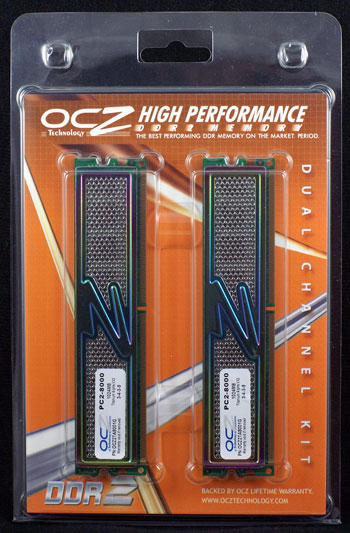 OCZ has also been hard at work with some very unique binning of Micron DDR2 memory chips, but with a very different goal in mind. OCZ manufactured a very well-received DDR memory called VX that was designed to perform at very high DDR voltages to deliver unheard-of memory speed to the DDR market. OCZ has applied a similar binning philosophy to Micron DDR2 memory chips and has recently released the Titanium Alpha VX2 series of memory.

VX2 is guaranteed to operate at 2.4V +/- 5% without stability issues and without voiding the OCZ Lifetime Warranty. That translates into allowed voltages up to 2.525V. This basically equates to running DDR2 at DDR voltage.

Test DIMMs were a 2GB kit composed of two 1GB DIMMs rated at DDR2-1000. DIMMs have a really unique rainbow colored XTC heatspreader. Ti Alpha VX2 is available only as a 2GB kit or as individual 1GB DIMMs. Ti Alpha is also available as a low latency DDR2-800 kit without the VX2 designation.


Both members of the Titanium Alpha family feature the multi-colored heat-spreader.