Much of the focus in PC gaming these days is centered around action-oriented games and first-person shooters. While we are very much into these kinds of games, we are always interested in the different kinds of game genres there are out there. Games like Battlefield 2 and F.E.A.R. seem to be the types of games as of late that compel most gamers to upgrade their graphics hardware, but we've been lucky to see some strategy and simulation-type games (i.e. Black and White 2) that also make good use of some of the high end cards available now.

One genre, which gamers tend to either love or hate, is the space simulation. Of course, there are varying degrees of these types of games, with one end being fluffy Star Wars/Star Trek type games and the opposite end being games like EVE Online and Homeworld 2. Games like EVE Online, in particular, are incredibly open-ended and include features like complex in-game market systems and economies as well as industry and combat elements, all in a massively multiplayer online world.

Recent space simulation games tend to rely more heavily on graphics than in the past, and as technology has improved, so has the looks of these games. Arguably one of the best looking space sims out now is the newly released installment of the X series, X3: Reunion. While not an online multiplayer simulation game, it still features open-ended gameplay that has a lot to offer.

Egosoft is most known for a series of space simulation games based on the X universe, X: Beyond the Frontier, X2: The Threat, and their most recent X3: Reunion. The storyline in X3 continues where X2 left off, with the threat of an invading alien race in the X universe. Originally, Egosoft was going to offer an expansion pack for X2, but it eventually evolved into a sequel. While there is a storyline, the game has a "sandbox" type feel, in that the game can be played in other ways than just completing missions associated with the storyline. 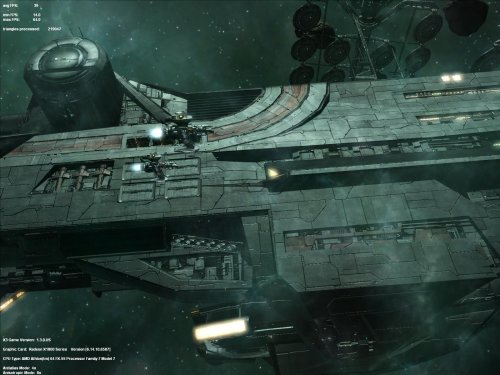 While there were some technical issues with X3 when it was first released, specifically with massive frame rate drops during the game, the X3 rolling demo runs very smoothly and without any bugs. The demo incorporates the four major aspects of the game (fight, trade, build, think) in order to reflect gameplay accurately. The scenes are very similar in style to X2's demo, with multiple ships of different sizes flying around, orbiting structures, sometimes battling each other. This is all set in front of an impressive space setting with beautifully rendered planets and stars, as well as the realistic-looking explosions from the ship battles. All of these images combine to create a very effective and immersive future-space environment.