by Anand Lal Shimpi on October 19, 2005 12:05 AM EST
30 Comments | Add A Comment
30 Comments + Add A
Comment
When it comes to benchmarking for AnandTech, a KVM (Keyboard, Video & Mouse) switch is an absolute must. The idea is simple; you have one keyboard, one monitor and one mouse, and want to share it between more than one computer. You could always plug in your keyboard, monitor and mouse to any system that you wanted to use, and then unplug and move them to another system when you're ready to switch, but obviously that's not the most efficient way of doing things. Thus, the KVM was born. Used everywhere from benchmarking labs to data centers, a KVM is an invaluable tool for anyone managing more than one computer.

For the longest time, KVMs were only available in PS/2 + VGA formats, meaning that you could only switch a PS/2 keyboard and mouse, and an analog VGA monitor. Several years ago, the PS/2 + VGA limitation wasn't that big of a deal, since USB keyboards and mice weren't that prevalent, and a lack of DVI support wasn't a big deal either, since hardly any monitors used the digital standard. Obviously today, you'd be silly not to invest in a USB + DVI KVM, but not too long ago, they were almost unheard of.

As LCDs grow in popularity, we are starting to see a dramatic increase in affordable, high-resolution panels. Just a couple of years ago, a 1600 x 1200 LCD panel would have cost a fortune, and now, thanks to companies like Dell, 1600 x 1200 LCDs are now affordable. More recently, Dell introduced their first 24" 1920 x 1200 panel at below $1000. The one thing that all of these high resolution panels have in common is that they have no problems working with just about any KVM with DVI support. The common denominator is that even the Dell 2405FPW, with its 1920 x 1200 native resolution, only requires a single link DVI connector to handle the bandwidth required by its high resolution. However, once you start getting much higher than 1920 x 1200, you start running into the bandwidth limitations of a single link DVI connection.

The electrical signaling used to transmit data over DVI is known as transition minimized differential signaling, or TMDS for short. When a DVI output is referred to as being "single-link", it is actually referring to the presence of a single TMDS link. A single TMDS link carries three data channels and one clock signal, with a maximum frequency of 165MHz. The 10-bit wide TMDS link can support a maximum bandwidth of 165 MPixels/s, which on a 60Hz LCD ends up giving you support for resolutions up to 1920 x 1200, as well as a few slightly higher, custom resolutions.

If you wish to support an even higher resolution display, you'll need more bandwidth, and thus, the DVI specification allows for two TMDS links to be used in tandem. With two TMDS links, the number of data channels is doubled, although there is still only one clock signal, so both links are clocked identically. Two TMDS links can support a maximum bandwidth of 330 MPixels/s, or twice the bandwidth of a single TMDS link.

With twice the bandwidth, a dual-link DVI output (meaning that it has two TMDS links) can support much higher resolutions. There are very few examples of dual-link DVI displays on the market today, one of the most recent being Apple's 30" Cinema Display with a native resolution of 2560 x 1600. Despite its ultra-high resolution, the 30" Cinema Display only uses about 270MPixels/s of bandwidth, putting its requirements over what a single link DVI connection can offer, but still well under the maximum of what a dual link connection can deliver.

Much more important than the high end cards with dual link DVI support are the low end and mid-range graphics cards that will feature support for dual link displays. ATI's Avivo initiative guarantees that all Avivo cards, including the low end Radeon X1300 and the mid-range X1600, will feature at least one dual link DVI output. We are hoping that NVIDIA will follow suit, and thus, give monitor manufacturers a reason to start producing more very high resolution displays, and hopefully drive the price of those panels down as demand goes up. It is very much a chicken-and-egg scenario, but the process has begun.

With dual link DVI monitors available, as well as the video cards needed to drive them, what more can we wish for? Dual link DVI KVMs, of course.

Today, we're taking a look at a company called Gefen, and a product that they call the DVI DL, a dual link DVI + USB KVM switch box. 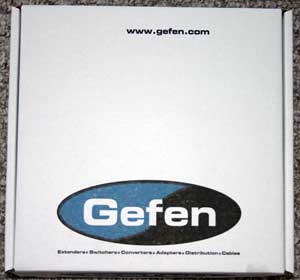