by Anand Lal Shimpi on July 25, 2005 3:50 PM EST
133 Comments | Add A Comment
133 Comments + Add A
Comment
For years now, motherboard manufacturers have been struggling to find other markets to branch out to, in an attempt to diversify themselves, preparing for inevitable consolidation in the market. Every year at Computex, we'd hear more and more about how the motherboard business was getting tougher and we'd see more and more non-motherboard products from these manufacturers. For the most part, the non-motherboard products weren't anything special. Everyone went into making servers, then multimedia products, then cases, networking, security, water cooling; the list goes on and on.

This year's Computex wasn't very different, except for one thing. When Gigabyte showed us their collection of goodies for the new year, we were actually quite interested in one of them. And after we posted an article about it, we found that quite a few of you were very interested in it too. Gigabyte's i-RAM was an immediate success and it wasn't so much that the product was a success, but it was the idea that piqued everyone's interests.

Pretty much every time a faster CPU is released, we always hear from a group of users who are marveled by the rate at which CPUs get faster, but loathe the sluggish rate that storage evolves. We've been stuck with hard disks for decades now, and although the thought of eventually migrating to solid state storage has always been there, it's always been so very distant. These days, you can easily get a multi-gigabyte solid state drive if you're willing to spend the tens of thousands of dollars it costs to get one; prices actually vary from the low $1000s to the $100K range for solid state devices, obviously making them impractical for desktop users.

The performance benefits of solid state storage have always been tempting. With no moving parts, reliability is improved tremendously, and at the same time, random accesses are no longer limited by slow and difficult to position read/write heads. While sequential transfer rates have improved tremendously over the past 5 years, thanks to ever increasing platter densities among other improvements, it is the incredibly high latency that makes random accesses very expensive from a performance standpoint for conventional hard disks. A huge reduction in random access latency and increase in peak bandwidth are clear performance advantages to solid state storage, but until now, they both came at a very high price.

The other issue with solid state storage is that DRAM is volatile, meaning that as soon as power is removed from the drive, all of your data would be lost. More expensive solutions get around this by using a combination of a battery backup as well as a hard disk that keeps a backup of all data written to the solid state drive, just in case the battery or main power should fail. 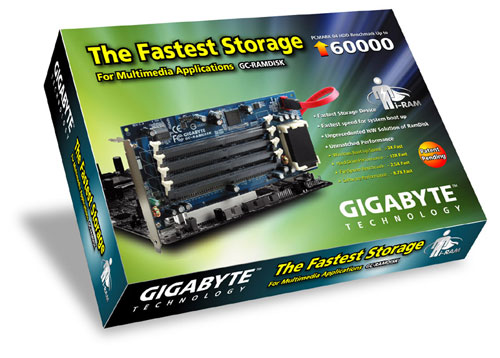 By utilizing conventional DDR memory modules, Gigabyte's i-RAM is a lot cheaper to implement than more conventional solid state devices. Gigabyte sells you the card, and it's up to you to populate it with memory - a definite plus for those of us who happen to have a lot of older memory laying around, especially after next year's transition to DDR2 for AMD platforms. 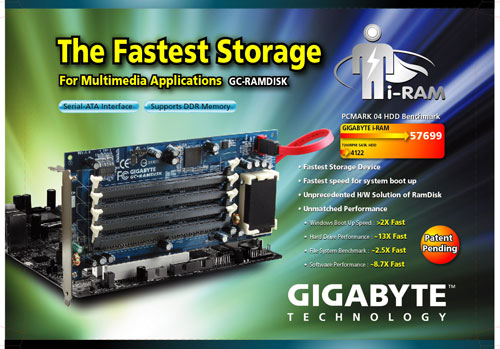 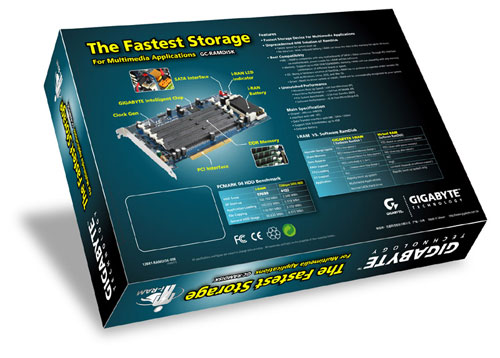 The backup issue is solved by the use of a battery pack that is charged by your system on the fly, although there is no disk backup available for the i-RAM.

Through some custom logic, the i-RAM works and acts just like a regular SATA hard drive. But how much of a performance increase is there for desktop users? And is the i-RAM worth its still fairly high cost of entry? We've spent the past week trying to find out...